The Royal Society of St George was founded in 1894 as a patriotic society for those who love England and Englishness. Kipling was an Honorary Vice President of the Society. The Times (24 April 1920, page 15) reported that about four hundred people attended the dinner, all wearing red roses. The members of the Guard of Honour, drawn from Non-Commissioned Officers and Privates of the Grenadier and Coldstream Guards, were dressed in the costumes of the Yeoman of the Guard and of soldiers from the Tudor and early Georgian periods. English music was played throughout the dinner and roast beef was served.

Among the guests were Caroline Kipling, Major General Dunsterville (Stalky), Sir Aston Webb (1849-1930), President of the Royal Academy of Arts, and Howard Ruff, founder of the Society of St George. Messages were sent to the King, George V, and to the Prince of Wales. The Bishop of Birmingham, Henry Wakefield (1854-1933), proposed a toast to the Royal Family.

Kipling, speaking as the President of the Society, proposed a toast to England and the English. He began by recalling the story that the Romans allowed the people of England to say what they thought without fear on one day of the year. Kipling planned to follow this practice, but, within limits, as the masters of his day did not have quite the power or the tolerance of their Roman predecessors. He reminded his audience of the varied racial origins of the English, suggesting that this was one reason for their general tolerance. England, Kipling stated, had been controlled for five hundred years by foreign ‘politico-ecclesiastical authorities’. Finally ‘subjugated by the Scot’, the English had entered the era of party politics.

If the English became disenchanted with the home country, they took to the sea and the Empire was one result of this practice. When the nation, quite unprepared, was thrown into the First World War, two years’ sacrifice of the young took place. The strength of the English lies in their varied race experience and their high standards. Kipling ended his speech with an attack on increased state supervision and control. He argued that strength of character was the only hope for the future. If this hope were justified, later generations would look back with pride and respect. There were loud cheers at this point in Kipling’s speech. Later speakers proposed toasts to Shakespeare and other great Englishmen, to the armed forces, to those who had died in the war, and, finally, to the Society. 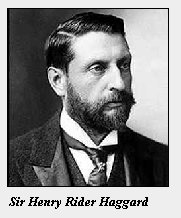 Kipling’s address very learned, very profound, and very analytical, but took no hold of the large audience, much of which, I think, could not hear him. Evidently he had learnt it by heart in his usual fashion and its polished periods smelt of the lamp.

[Page 175 line 2] the pillars of Hercules the Straits of Gibraltar between Spain and Africa. 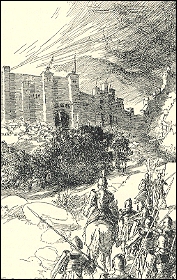 [Page 177 line 5] the Wall Hadrian’s Wall, built in 122-27 to defend Roman territory to the south of this northern frontier, stretched from the Atlantic to the North Sea. See [ “On the Great Wall” in Puck of Pook’s Hill]

[Page 178 lines 25-28] ‘A true-born Englishman’s a contradiction…’ Defoe wrote these lines in defence of William of Orange, William III, whom some had attacked as a foreign-born king.

[Page 179 line 3] Phoenicians a maritime people who traded with Britain before the Roman conquest: they were Semitic, originating from the eastern coast of the Mediterranean.

[Page 179 line 6] Heptarchy the seven kingdoms established by the Angles and Saxons from the fifth to the ninth centuries, Wessex, Sussex, Kent, Essex, East Anglia, Mercia, and Northumbria.

[Page 179 line 11] three-hundred-years’ course the Normans, who spoke Norman French, conquered Britain – where people spoke Anglo-Saxon, in 1066. By the fourteenth century there had been a melding of the two language traditions into what scholars call ‘Middle English’, the language in which Geoffrey Chaucer wrote his Canterbury Tales.

[Page 179 line 23] “this realm of England” Kipling is referring to John of Gaunt’s speech from Shakespeare’s “Richard II”, Act II, Scene 1: ‘this earth, this realm, this England’.

[Page 179 lines 29-30] Geneva, Leyden, Amsterdam, and the Low Countries Geneva in Switzerland was the home of Jean Calvin (1509-64) from 1536 to 1564 and was the centre of Calvinistic Protestantism. John Knox (who founded the Scottish Presbyterian Church) lived there from 1556-58.

[Page 179 lines 31-2] subjugated by the Scot King James VI of Scotland and I of England succeeded Elizabeth Ist on the throne of England in 1603. Few modern historians would agree that he ‘subjugated’ the English.

[Page 180 line 25] Papal Legate the representative of the Pope.

[Page 181 line 32] ninety nine years of peace this was reckoned from 18th June 1815, when the Battle of Waterloo was fought, up to July 1914, when a four days’ ultimatum was issued which led to the First World War. During these ninety-nine years no fighting took place on or near the shores of Britain.

[Page 182 line 4] King Alfred Alfred the Great (849-899), King of the West Saxons, who defended England against the Danes and effected a revival of letters among the clergy.

[Page 182 lines 8-9] broken a Church the Protestant Reformation marked the breaking away of the English Church from Rome and the Pope. Henry VIII (1491-1547), who objected to the Pope’s refusal to allow him to divorce Catherine of Aragon, made the initial break, asserting the supreme authority of the Crown in Parliament. His son, Edward VI (1537-1553), continued the process.

[Page 183 line 11] the Armada in 1588 a Spanish fleet set out to invade England and depose the Protestant Elizabeth I (1533-1603). The Armada was defeated at the Battle of Gravelines, and forced by south-west gales to sail home around the north of Scotland with heavy losses. They did not return. See “Simple Simon” in Rewards and Fairies.

[Page 183 lines 20-21] Coronel and Zeebrugge naval battles in the First World War. On 1 November 1914 a German fleet defeated an English fleet off the coast of Chile, near the port city of Coronel. On 23 April 1918 a combined force under Admiral Sir Roger Keyes (1872-1945) successfully attacked a canal exit at Zeebrugge used by German U-boats based at Bruges in Belgium.

[Page 183 lines 25-26] Sir Richard Grenville off Flores, in the Revenge Grenville (1541?-1591) and the sailors of the Revenge fought alone and heroically against a Spanish fleet off Flores in the Azores in 1591. The ship was captured and Grenville, sorely wounded, later died. The battle is the subject of a poem by Alfred Tennyson (1809-1892), published in 1880, and an account of the battle is given in Westward Ho! by Charles Kingsley (1819-1875), published in 1855. Kipling’s school, The United Services College, was in the seaside town in Devon named Westward Ho! after the novel.

[Page 183 line 32] Panama a city on the Gulf of Mexico, initially part of the Spanish empire and now in Florida, USA.

[Page 185 line 9] One school of thought, Muscovite in origin Kipling is presumably referring to Communism.

[Page 185 line 18] Crusade a series of ventures by armies from western Christendom between the eleventh and thirteenth centuries against the Saracens, intended to capture Palestine, the Holy Land, for Christianity.

[Page 185 line 25] “pathetic contentment” Kipling is quoting from the Liberal politician Edwin Montagu (1879-1924) who spoke in 1918, while Secretary of State for India, of the ‘pathetic contentment’ of the typical Indian village. Montagu, with the Viceroy, Lord Chelmsford (1868-1933), brought in the Government of India Act in 1919, to increase the participation of Indians in the Government of India.

[Page 185 line 31] William the Conqueror William I (1028-87), who came to the throne after the Battle of Hastings in 1066, introduced new and rigorous administrative and legal practices, as well as instigating a record of the ownership of property in the Domesday Book of 1086.

I’m trying to see if I can do anything useful: but most of my stuff on the subject seems to have been done a generation ago. In The Book of Words, however, MacM. p.186, top para, there’s a quotation that may be useful if the Socks are turned down at next Election.
[Letters. Thomas Pinney (Ed.) vol 6. p. 55]

Kipling may have been referring to the Labour Party as ‘socks’ – ‘socialists’.