Canadian Clubs were intended to promote an interest in public affairs in Canada and to support Canadian institutions. The first club was founded in 1893 and there were thirty-five at the time of Kipling’s second visit to the country in 1907. Kipling wrote:

They catch people who look interesting, assemble their members during the mid-day lunch-hour, and, tying the victim to a steak, bid him to discourse on anything that he thinks he knows.

Kipling speaks of the fellowship of the Empire and, in particular, of Canada, Australia, New Zealand and South Africa. He refers to the commercial possibilities of this fellowship and presents Canada as an example to other nations.

[Page 23, line 2] Callimenes A writer in ancient Greece. W R Paton, in Book VI (62 – Philippus of Thessalonika) of The Greek Anthology, has:

Callimenes, on giving up his work, now old age has veiled his eyes, dedicated to the Muses his circular lead which marks off the margin of the pages, and the knife that sharpens his pointed pens, his longest ruler, and the pumice from the beach, the dry porous stone from the sea.

We have not traced Kipling’s quotation, but from this one—reminiscent of the concluding lines of the last chapter of Something of Myself
(‘Working Tools’)—one can see why Callimenes appealed to him. 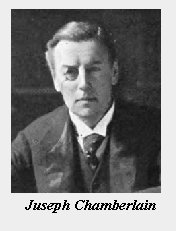 [Page 26, line 10] Joseph Chamberlain (1836-1914) Controversial
politician who left the Liberal party over the issue of Irish Home Rule, and joined the Conservatives. He was Secretary of State for the Colonies in Conservative governments from 1895 to 1903, and was a key figure in the decision to force was on the Boers in 1899.

Kipling is referring here to Chamberlain’s policy of encouraging a closer association between Great Britain and the Empire and between the member countries. Chamberlain was a strong defender of imperialism, and in particular of ‘imperial preference’ in commerce, to make it easier to trade between Britain and the
countries of the Empire.

See our notes on “Things and the
Man”, Kipling’s valedictory eulogy of Joseph Chamberlain, whom he much admired.

[Page 28, line 7] when one of our community was in distress the second South-African War, 1899-1902. The Boers, the Dutch community in South Africa, rose in an unsuccessful revolt against British rule. Chamberlain’s colonial policy was the chief cause of dissent.

See our notes on “The Science of Rebellion”