The Royal Academy of Arts was founded in 1768 and the annual Royal Academy Dinner marks the opening of the Summer Exhibition. Kipling spoke in the Royal Academy’s present home, Burlington House, Piccadilly. In the Chair was the President, Kipling’s first cousin, Sir Edward Poynter (1836-1919). Among the other speakers was the Duke of Connaught (1850-1942), representing the Royal Family
.

The Duke’s subject was the Imperial Forces. Admiral Sir Archibald Davies spoke for the Navy; Richard Viscount Haldane (1856-1928) for the Army, and the Prime Minister, Sir Henry Campbell-Bannerman (1836-1908), represented the King’s ministers. Kipling, who spoke next, on Literature, had arrived in Southampton from South Africa at 4.20 a.m. on the morning of the same day. 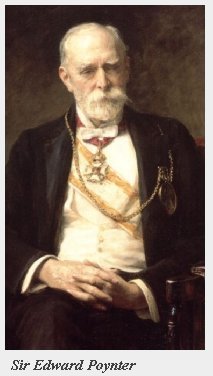 Introducing his cousin, Poynter referred to Kipling as one:

‘who never wrote a slovenly line in his life either of poetry or prose, and who has, besides, that insight into humanity and that power of concentrated expression which proclaims an artist of the highest degree’.

At this the audience cheered. After further commendations for Kipling’s work, Poynter closed by saying:

‘I will not praise him further to his face, for he has never courted applause and is modest enough to resent it’.

Kipling, said Poynter, who had known him since childhood, understood that fame and public life would ruin his writing: ‘His work is his life, and his home and family are his dearest relaxation’. (The Times, 7 May 1906, page 15)

The Times, which reported Kipling’s speech in full, often notes his audience’s laughter and, at the commencement and the end of his address, their cheers. He was followed by two further speakers, the Lord Mayor of London and the Duke of Northumberland.

Kipling speaks of the power of language, telling of an ancient tribe who fear the man who can invoke the magic of words. Writing to H.A.Gwynne of the lecture on 12 May 1906, Kipling said: ‘Your dates like my speech are too damn allusive – not to say elusive’. (Letters, Ed. Pinney, vol 3. p. 212)

[Page 3, line 21] became alive and walked up and down in the hearts reminiscent of a sentence in Job I,7, although the implication is quite different. The Book of Job was probably written about the 9th Century B.C. The verse from Job is:

‘And the Lord said unto Satan, Whence comest thou? Then Satan answered the Lord, and said, From going to and fro in the earth, and from walking up and down in it.’

[Page 6, line 19] an English Admiralty official with a taste for letters Samuel Pepys (1633-1703), author of the famous diary. Pepys was Secretary to the Admiralty.