Published in the The Scotsman 8 July 1920 page 8. (note Kipling’s comments in his letter to H.W.Feilden quoted below) Collected in A Book of Words, Macmillan, London, 1928.

Kipling gave two speeches at the time of his investiture as LLD of Edinburgh University on 8 July 1920. The first was delivered at a dinner for graduands on the night of 7 July. According to The Times (9 July 1920, 13), in his speech, entitled ‘Spirit of the Scotch’, Kipling explained that he had not attended a University, but insisted that he was aware of the importance accorded to learning in Scotland. From the reference in The Times to the influence of John Knox (9 July page 13) it would seem that this was the speech later collected, in a revised version, as “The Scot and the War”. After the ceremony, the students asked Kipling to address them and he gave a ‘brief and humorous speech’ (Times, 9 July 13d).

Kipling gives a full account of his time in Edinburgh in a letter to Colonel H.W.Fielden of 9 July 1920. (Letters, Thomas Pinney (Ed.) vol. 5, pp.25-26) There was a Royal visit to Scotland at the time, and Kipling describes George V and Queen Mary. He notes that other speakers at the University dinner were the Lord Chief Justice of Scotland, Lord Clyde (1863-1944); the statesman and delegate to the League of Nations, George Nicoll Barnes (1859-1940) and Sir William Chesser, Lord Provost of Edinburgh from 1919-21. The Moderator of the General Assembly, Church of Scotland, the Reverend Professor William Paterson (1860-1939), responded to Kipling’s speech. In his letter to Fielden, Kipling thanks him for his advice:

I strictly remembered your injunction about my speech – eschewed prolixity and the Scottish accent and got a good reception but the reporters did not worry to ask me for any copy and so hashed it in the paper.
(Letters, Thomas Pinney (Ed.) vol. 5, p. 25)

Kipling spoke of the envy which an Englishman must feel when contemplating the University of Edinburgh, an important element in the powerful effect of the Scots throughout the world. He argued that the power of the Scots in the last three hundred years derived from the teachings of John Knox and from Knox’s belief that men should ‘use themselves in matters of religion and conscience as they should answer to their Maker’. He ended with a tribute to those graduates of the University who had fought in the First World War. 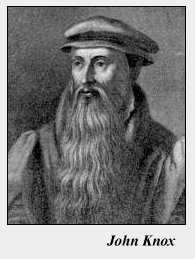 [Page 192 lines 10-11] the monstrous regiment of women in 1558 Knox published a tract entitled The First blast of the Trumpet against the Monstrous Regimen of Women against the female sovereigns of his day, particularly Mary of Guise, Queen Dowager of Scotland and regent to her daughter Mary, Queen of Scots, and Queen Mary I of England who sought to restore catholicism.