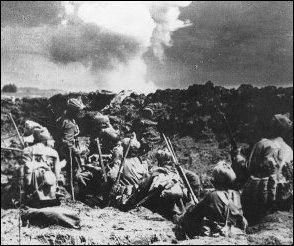 One million Indian soldiers served overseas during the Great War. Over 74,000 of them died, and another 67,000 were wounded.

In 1915 and 1916 Kipling. who had seen a good deal of the Indian Army during his time in India as a journalist, wrote four stories in the form of letters home from Indian soldiers. They were collected in 1918 as
The Eyes of Asia (1918).

This speech was given at a ceremony in 1927 for the unveiling at La Bassée, Neuve Chapelle, of a War Memorial for the Indian dead.

In a letter of 10 October to Walter Creighton, Kipling explained that he had travelled to the ceremony on the train in the company of Maréchal Ferdinand Foch (1851-1929), ‘one of the most interesting men in the world’. [Letters, (Ed. Thomas Pinney) vol 5 p. 385] Foch was one of the great French generals of the war, and was supreme commander of the allied armies in 1918, during the final defeat of the Germans. In his story “The Bull that Thought” of 1924 (Debits and Credits p. 231), Kipling describes the subtle and intelligent hero as ‘this Foch among bulls.’

The Secretary of State for India, Lord Birkenhead (1872-1930) unveiled the memorial to those Indian dead of the First World War ‘for whom there is no known grave.’ Birkenhead (formerly F E Smith) was one of the most brilliant advocates of his generation, and held high office as a Conservative politician. The architect of the Memorial was Sir Herbert Baker, who later worked on the creation of New Delhi with Sir Edwin Lutyens. The sculpture, much of it employing Indian motifs, was by Charles Wheeler.

In Kipling’s view, Birkenhead’s speech was ‘the finest funeral oration since Gettysburg’. Birkenhead’s son quoted this in his biography of Kipling (p. 302). Kipling spoke, after Lord Birkenhead, at the luncheon in Béthune which followed the unveiling. Having been called upon for an address, he spoke without notes.

Kipling spoke of the close relations between Britain and France and of the contribution of the Indian soldiers. He evoked their bewilderment in travelling to Europe, but quoted from a letter from one soldier to his mother, assuring her that French people were not unlike the Indians. France would now be the keeper of the memorial to those who died.