Published in The Hobcob, Being a Souvenir of the Household Officer Cadet Battalion, Christmas 1917. Collected in A Book of Words, Macmillan, London, 1928.

Bushey Hall in Hertfordshire, built in 1865, was requisitioned for officer training for young officer cadets from the Household Brigade during the later part of the First World War. Kipling spoke to them about the origins of drill in a story of prehistoric times. He noted that prehistoric men had to learn the tactics of hunting, in particular how to walk through the jungle in single file. He then speculated on the development of the tactics needed to catch animals on open ground. His conclusion was that the demands of hunting came before those of warfare.

[Page 131, lines 6-8] as Shakespeare so beautifully observes this is in fact a joke, as Shakespeare did not write these lines. See J.M.Wilkes (“Speaking of Myself: Independence, Self-Representation, and the speeches of Rudyard Kipoling” MA Thesis , Brigham Young University, USA, 2009) pp. 53-56 for a convincing explanation of Kipling’s motives here.

During the First World War he raised a considerable sum for the Red Cross.

[Page 133, line 9] Cameroons campaign the Cameroons in West Africa. The country became a German colony in 1884. During the First World War the allies attacked German territory from 1914 to 1916, and captured the territory. At the end of the war the Cameroons were divided between Britain and France.

[Page 133, lines 21-22] Mr Jorrocks Mr Jorrocks, the sporting grocer, is a character in the novels of Robert Smith Surtees (1805-64). The expression “And thus, my beloved ‘earers” is first used in Chapter XVIII of Handley Cross, published in 1843. See Ann Weygandt (pp. 99-93) for an account of Kipling’s frequent references to Surtees, particularly in Stalky & Co.

[Page 134, line 5] German East Africa campaign during the First World War German forces attacked some overseas territories of the Allies with the intention of diverting troops from the Western Front. Although the campaign in East Africa was largely over by 1917, fighting continued until the end of the war in 1918.

[Page 135, line 22] Caterham a town in Surrey. From 1877 Caterham barracks was a depot for the foot guards regiments, where recruits were introduced to the disiplines of drill. The Guards instructors were legendary, and the drill exemplary. 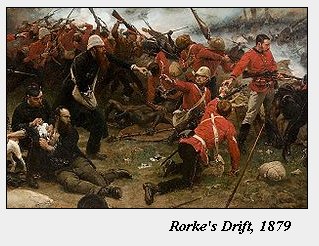 [Page 137, line 1] Zulu Impi the Zulu are a warrior people in Southern Africa and the Impi was a regiment of armed soldiers.

The British Army had good reason to remember the impi after the bloody fighting in the Zulu War of 1879. After early reverses the British, with modern weapons. were victorious.

[Page 142, line 20] Kimberley Diamond-fields Kimberley, in the centre of South Africa, was a leading centre of the diamond mining industry.

[Page 142, line 28] Colours the flag or standard of a regiment. The Colours carry a list of the battles in which a regiment has fought. The Colours were originally carried into battle as a rallying point.

[Page 144, line 16] Captain’s Wing the best part of a roast fowl or game-bird was traditionally reserved for the senior officers.

[Page 146, line 17] Mess the group who take their meals together in the army or the navy.

[Page 153, line 14] on the blackboard see Dr J.D.Lewins, ‘What Magic Square?’, in the Kipling Journal for December 1993, pp. 40-43, for a discussion of Kipling’s use of the blackboard during this speech which, as Dr Lewins points out, is the longest in A Book of Words.