This speech was broadcast and recorded, 6 May 1935. It was published in The Times, 13 July 1933, page 8, and reprinted in the Authors’ Bulletin of the Canadian Authors’ Association, XI, no 1, September 1933. It was collected in the Sussex Edition vol. XXV, pp. 317-20, together with the earlier speeches collected in A Book of Words, and in the Burwash Edition vol. XXIV.

Kipling was speaking at The Royal Society of Literature which was founded in 1823 under the patronage of King George IV. He greeted the Canadians as fellow writers, reminding them that writers cannot tell a lie and that their work is influenced by everything that has gone before. Some Canadian writers had chosen historical subjects, while others had written of more recent years when Canada had come into her own.

It is fortunately impossible, he declared, to tell how posterity will view a writer’s achievement. Their tour of Britain would introduce his hearers to the work of English artists and craftsmen. Kipling recalled his visits to Canada in 1892 (From Tideway to Tideway) and 1907 (Letters to the Family) and his admiration for the country as he came to understand it.

(the page and line numbers below refer to Volume XXV of the
Sussex Edition of Kipling’s works, Macmillan, London 1938). 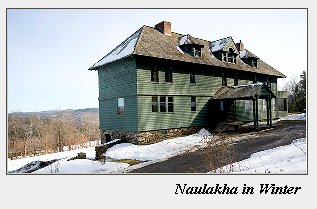 [Page 317 line 22] Jean Pigeon a builder from Quebec who was in charge of the design and construction of Kipling’s house at Brattleboro in Vermont in 1893:

That summer there came out of Quebec Jean Pigeon with nine other habitants who put up a wooden shed for their own accommodation in what seemed twenty minutes, and then set to work to build us a house which we called ‘Naulakha.’

Ninety feet was the length of it and thirty the width, on a high foundation of solid mortared rocks which gave us an airy and a skunk-proof basement. The rest was wood, shingled, roof and sides, with dull green hand-split shingles, and the windows were lavish and wide…
[Something of Myself pp. 114-5]

[Page 318 line 8] United Empire Loyalists American loyalists who settled in Canada after the defeat of the British army in the American Revolutionary War of 1775 to 1783.

[Page 318 line 9] Fenian raids The Fenian Society was founded in New York by James Stephens (1825-1901). They aimed to overthrow British rule in Ireland and to set up an independent republic. Their rising in 1867 failed. 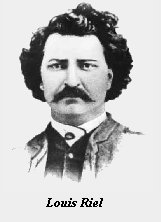 He was the champion of the Métis, those of mixed race, and the founder of Manitoba. He escaped the expedition sent to capture him and survived to start another raid in 1885 but was captured and hanged after the failure of that rebellion.