Vice Admiral Sir John Durnford (1849-1914) was in the Chair and Kipling was the guest speaker. In a letter to his son he explained that he had ‘to go up to London to deliver another beastly speech but this time it is to Navy men, so I don’t care so much’. (Letters, Ed. Pinney vol. 3 p. 342)

Kipling explained that, as an outsider, he could not tell the whole story of the Navy, much as he admired it. He noted that changes in technology had meant that sailors were no longer completely isolated while at sea, but still believed that the Navy was essentially aloof. He praised the history of the service and its part in securing the nation. The nation might need new fighting ships but the traditional spirit of the service would be the important thing in coming times.

[Page 56, line 30] Day of Armageddon In Biblical tradition the last battle, see Revelations 16. Kipling was certain that war with Germany would come.

[Page 58, line 16] battle of Tsu-shima 27-28 May 1905, scene of a Japanese naval victory during the Russo-Japanese war. Admiral Togo and his fleet inflicted devastating damage upon the Russians at very little cost to themselves, effectively bringing the war to an end. 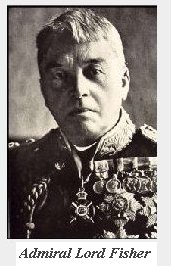 [Page 58, line 25] Incredibles or Insupportables
Alastair Wilson writes: ‘Kipling is referring, very topically, to a new class of capital ships, then being built. HMS Indomitable, Inflexible and Invincible (all names previously held by British warships) were considered the ne plus ultra of warships, and fought in the First World War, HMS Inflexible being sunk at the Battle of Jutland, 31 May 1916.

Their progenitor, Admiral of the Fleet Lord Fisher, at the end of the First World War, proposed to build an even bigger battle-cruiser (never built) which he wanted to name HMS Incomparable. [Since then, we have had HMS Implacable and Indefatigable, aircraft carriers.]’

[Page 58, line 28] guns and machinery and armour Alastair Wilson writes: ‘The decade and a half before the First World War had seen a naval arms race between Britain and Germany (with France, Italy, Russia and the United States, faint but pursuing).

In this whole paragraph, Kipling has been poking gentle fun, but with an underlying serious message, at the pundits who assumed that an extra half-inch on armour thickness, or gun calibre, or an extra half-knot of speed would make all the difference between victory and defeat.’

[Page 59, line 13] Trafalgar the battle of Trafalgar took place on 21 October 1805 off Cape Trafalgar in Southern Spain, during the Napoleonic Wars. The British fleet under Admiral Horatio Nelson (1758-1805) was victorious, but casualties were high and Nelson himself was killed.

His flagship, HMS Victory, is to be seen in the dockyard at Portsmouth.