Published in pamphlet form, Doubleday, New York, 1931 as “Address at the Annual Banquet of the France Grande Bretagne Association”. A short version was published in The Times for 4 July 1931, page 11. Collected in the Sussex Edition vol. XXV, pp. 309-14, together with the earlier speeches collected in A Book of Words, and in the Burwash Edition vol. XXIV.

Kipling was the guest of honour at the Banquet. From the chair, the diplomat, archaeologist and writer, the Marquis de Vogué (1848-1910), told his audience that Kipling was loved in France for his writing, and also for his love of the country. After his speech, M. Reynard (1878-1966), the Minister for the Colonies, again thanked Kipling for his friendship to France.

After hearing the speech, the art historian and literary historian, Louis Gillet (1876-1943), asked Kipling to write Souvenirs de France, published in French and in English in 1933.

See also his poem “France”, and the stories “The Bull that Thought” (Debits and Credits), “The Miracle of Saint Jubanus” (Limits and Renewals), and “The First Assault upon the Sorbonne£.

Kipling began by recalling his childhood visit to Paris for the Exhibition Universelle. Speaking of the relationship between France and Britain, he noted the history of invasions of one by the other, taking the gentlemanly understanding of two warring admirals as an example of mutual respect. He recalled the First World War, and declared his belief in the friendship of the two nations.

(the page and line numbers below refer to Volume XXV of the Sussex Edition of Kipling’s works, Macmillan, London 1938).

[Page 311 line 4] Exposition of ’78 the “Exposition Universelle” or Third World’s Fair. Kipling describes his time at the esposition in Something of Myself, pp 24-25. 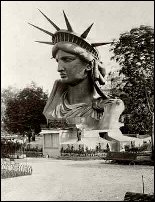 [Page 311 line 13] Trocadero gardens in Paris, on the site of the Palais de Chaillot and opposite the Eiffel Tower. The Palais de Trocadéro was built for the Exposition Universelle and the head of Liberty stood in the garden during the exhibition.

[Page 312 line 8] French conquerors the Norman invasion of England under William the Conqueror took place in 1066. Kipling may also be thinking of the accession of Henry II, the first Plantagenet or Angevin king, in 1154.

[Page 312 line 27] Admiral Benbow John Benbow (1653-1702) was a Vice Admiral of the Royal Navy. Having met a French fleet under Du Casse off Santa Marta in the West Indies, he pursued it in his flagship, HMS Breda, but was, as Kipling says, forced to retire because his captains protested and refused to support him. He died of his wounds in Jamaica soon afterwards.