Published in The Times 6 October 1929, page 11. Published in pamphlet form as “Address at Milner Court”, Doubleday, New York, 1929. Published in the King’s School Magazine, The Cantuarian, December 1929, and in the American magazine Living Age 15 November 1929.
Printed in leaflet form in England, 1929. Collected in the Sussex Edition vol. XXV, pp. 301-7, together with the earlier speeches collected in A Book of Words, and in the Burwash Edition vol. XXIV.

The Junior School of King’s School, Canterbury was named after Viscount Milner (1854-1925), whose widow gave the land at Milner Court, Sturry, on which the Junior School stands. At the request of Lady Milner, Kipling was speaking at the Dedication of the new School.

The ceremony took place in the Tithe Barn, and the Archbishop of Canterbury conducted a short service. William Spens, the Master of Corpus Christi College, Cambridge presided. After Kipling’s speech, the Headmasters of the Senior and Junior Schools spoke, followed by the Bishop of Dover, John Macmillan (1877-1956), who asked Kipling to formally open the South Door of the New Building.

Unfortunately, the boys, who were placed furthest from the platform, had difficulty in hearing Kipling’s speech, but the Headmaster later read it to them. Kipling’s request that the boys should have a half-holiday, to compensate them for having to come to school on a Saturday, was granted by the Headmaster, Norman Birley (1891-1980).

Kipling argued that the schoolboys would learn about life at school. He urged them not to spend their time complaining about injustice or nursing grievances. He paid tribute to Lord Milner, giving a broad outline of his career, and concluded by urging the boys to follow Milner’s example.

(the page and line numbers below refer to Volume XXV of the Sussex Edition of Kipling’s works, Macmillan, London 1938). 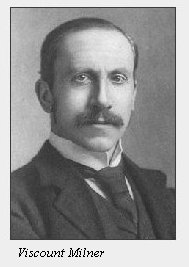 [Page 305 line 32] a half-ruined Dominion Milner was High Commissioner for South Africa from 1897 to 1905. He had urged on the Cabinet the need to go to war against the Boer republics in 1899, in the Second South African War, and did much to rebuild the country after peace was made in 1902. Like Kipling, he believed strongly in the merits of British imperial rule.

Many of his policies were opposed in the House of Commons, in particular by the Liberals, who were in office from January 1906 to May 1915. The Liberals gave the Boer republics self-government under the British Crown.

[Page 306 lines 19-20] one thing needed to be done As a member of the War Cabinet, Milner was sent to France in 1918 to investigate the problems arising from the lack of a supreme command. As a result of his report, Marshal Foch was placed in overall command, and this helped to bring the war to an end.