This story was first published in The Delineator in June 1910, and Nash’s Magazine in July 1910. It was collected in Rewards and Fairies later in the same year.

Up in the woods a great tree-trunk is being hauled down the hill to be a keel for a new ship. With Puck, Dan and Una meet Simon Cheyneys, shipbuilder and burgess of Rye in the days of Queen Elizabeth. He tells how as a lad he shipped with Francis Drake (‘Frankie’) in the ‘fetching trade’, sailing across the Narrow Seas to rescue Protestant refugees from Spanish persecution. This was Drake’s apprenticeship in handling a ship in dangerous waters, and fighting the Spaniards. Drake is the real hero of this tale. but Simon had been his good friend, a friend ‘that sticketh closer than a brother’. 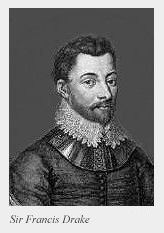 Simon is injured by a Spanish cannon-ball, and goes ashore, and soon takes over his uncle’s shipyard. He doesn’t see Frankie for twenty years. Little is said about him during that time, in which he sailed round the world, and hanged his best friend ‘Mus’ Doughty’ on the way, for mutiny. Puck warns Simon against telling the children about the incident, but we are left with a sense that a lot had happened.

In 1588 the Spanish Armada sails up Channel, harried by Drake and his smaller English ships. From Rye Simon and his aunt bring out all the stores that Frankie will need, and give him the supply vessel as a fireship, to help force the Spaniards onto the Dutch sands he knows so well. The friendship has born good fruit, but there is a feeling of sadness at the end of the story.

Mary Lascelles in The Story-Teller Retrieves the Past discusses Kipling’s use of historical material in this story. The sources she proposes are: John Barrow’s Voyages and Explorations of Sir Francis Drake (1843), J. L. Motley’s History of the United Netherlands (1869), and J. S. Corbett’s Drake and the Tudor Navy (1899).

J M S Tompkins, who read this story as a child, notes that like many others in this collection, it can be read on different levels, as a child, and as a more worldly-wise adult:

Puck restrains Drake’s friend, Simon Cheyneys, from saying what is on his mind about the hanging of Thomas Doughty by Drake’s orders on the Golden Hind. His name comes up and is dismissed. Simon’s aunt prophesies that Drake will bury his heart beside the road he will open from east to west and back again; and, before the tale begins, the children have seen Cattiwow, the woodman, lash his team-leader to get the last ounce of effort out of him, and Simon has pointed out to them that Cattiwow `cherished his horse, but he’d ha’ laid him open in that pinch’.

But such knowledge is too hard for children, and the tale moves on another course, towards the Armada that Dan has been hoping for. Nonetheless they feel – I felt, when I failed to get any information about Mus’ Doughty out of my family – that some unknown and cruel obligation, such as confronts at times the leaders of men, had awaited Frankie by the side of the road he opened. The tale puzzled me; the bits did not seem to come together, or, as I should say now, the pattern was incomplete.

What is full in the child’s vision, and very satisfactory, is the opportunity that comes at length to the modest home-keeping burgess of Rye to supply Drake’s need for stores and ammunition in the middle of the fight with the Armada, and Drake courteously embracing his friend before all his great captains and causing his ship’s music to play him away with honour. This is a situation full of the most reassuring moral and emotional lights.

Also, in case Simple Simon should be held too cheap, there are his little models of iron ships that floated, but were given up, since what England needed of Rye was wooden ships. They were `untimely’, like the microscope of “The Eye of Allah” (in Debits and Credits).

[Page 281, line 2] timber-tug carriage of a wagon for conveying timber. 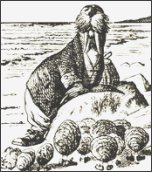 [Page 283, line 2] The Walrus and the Carpenter in Lewis Carroll’s Through the Looking-Glass; the Tenniel illustration is in mind.

[Page 283, line 17] Burgess of Rye Rye was an ancient port and ship-building centre on the south coast of England. A burgess was a magistrate or town councillor, one of the important figures in the town.

[Page 287, line 27] for to make ’em Papishers. ‘Papishers’ meant ‘followers of the Pope’. At that time what are now Belgium and the Netherlands were part of the Spanish Empire. But Protestantism had taken hold in the ‘Low Countries’, particularly in the north, Spanish taxes were heavy, and Spanish rule unpopular. As a result armed rebellion was spreading through the northern cities, given qualified support by Queen Elizabeth. Spain sent an army to suppress the rebels, and with the full terror of the Inquisition, was trying to root out protestantism, ‘for to make ’em Papishers’.

[Page 288, line 9] bewling perhaps a Kipling conflation of `bawling’ and ‘mewling’ (the latter common for the sound a kite makes).

[Page 290, line 7] Queen Bess she broke his heart presumably refers to Drake’s loss of favour after the unsuccessful expedition against Portugal undertaken in 1589.

[Page 292, line 9] eating and drinking with a dead man on Drake’s voyage of circumnavigation he came to suspect his close friend Thomas Doughty of treachery. A quasi-court martial held in the harbour of Port St Julian, on the coast of modern Argentina, condemned him to death.

Before his execution he and Drake dined together `as cheerfully in sobriety as ever in their lives they had done aforetime, each cheering up the other and taking their leave by drinking to each other, as if some journey only had been in hand’ (contemporary account, quoted in J S Corbett Drake and the Tudor Navy (1899) i. 246).

[Page 293, line 10] gor-bellied this presumably refers to the swelling sides of the Spanish vessel, but the derivation is not clear.

[Page 297, line 4] past Fairlight Some ten miles south-west of Rye.

[Page 299, line 2] Fenner that fought the seven Portugals for Captain Thomas Fenner and his fight with seven Portuguese ships off the coast of Guinea see J S Corbett Drake and the Tudor Navy (1899) 94-5.

[Page 299, line 27] anchor cathead a strong beam projecting through the bows of a ship, for raising the anchor.

[Page 300, line 4] brimstone Spanish Brimstone is sulphur. In this context, ‘fiery’, or ‘burning’. The reader can assume that Drake was swearing exuberantly in Spanish.

[Page 301, line 13] Swep’ an’ garnished Matthew 12,44. The phrase is used here purely as a tag, meaning ‘clean and ready’, unlike its use as a story title in A Diversity of Creatures.

[Page 301, line 32] Mary Ambree’ In 1584 the Spanish captured the city of Ghent, and Captain Mary Ambree, along with several other Dutch and English volunteers, fought to liberate the city. Ambree eventually became the subject of an English ballad:

When captaines couragious, whom death cold not daunte,
Did march to the siege of the citty of Gaunt,
They mustred their souldiers by two and by three,
And the formost in battle was Mary Ambree…

The ballad was clearly known to Kipling, since he used the phrase ‘Captains Courageous’ as the title of his novel about fishermen on the Grand Banks. See Percy’s Reliques (2nd series, Bk. 2).