This poem was first published in the Scots Observer on 21st June 1890 (ORG Volume 8, page 5303 lists it as Verse No. 464) For further details of publication see David Alan Richards, page 113. Brian Mattinson lists twenty-two musical settings of the poem.

To this day (2022) one of the two or three best loved of Kipling’s poems. There have been many musical settings. The version by Peter Bellamy here. Sinatra’s is here.

A British soldier, now discharged and back in London, looks back with nostalgia at his life in Burma with sunshine and a charming girl in terms which Le Gallienne, although an enthusastic patron of the music-halls, described in his review of Barrack-Room Ballads, as: ‘perfect of their kind though made of the very refuse of language. later observing that the very best of them is “Mandalay”.
[quoted by Charles Carrington p. 342.] >

This, like “The Grave of the Hundred Head”, was inspired by Kipling’s visit to Burma on his way home to England in 1889. He and his friends the Hills embarked at Calcutta, bound for London via America where the Hills would spend their leave. They made an unscheduled stop at Moulmein on the coast of Burma, where elephants, pagodas, tinkling bells, and a beautiful Burmese girl left a deep impression on Kipling. :

When I die I will be a Burman, with twenty yards of real King’s silk, that has been made in Mandalay, about my body, and a succession of cigarettes between my lips. I will wave the cigarette to emphasise my conversation, which shall be full of jest and repartee, and I will always walk about with a pretty almond-coloured girl who shall laugh and jest too, as a young maiden ought. She shall not pull a sari over her head when a man looks at her and glare suggestively from behind it, nor shall she tramp behind me when I walk: for these are the customs of India.
[From Sea to Sea, p. 221 line 19]

Charles Carrington, in his edition of Barrack-Room Ballads (Methuen 1974, p. 162), describes the poem as: ‘Perhaps the favourite among the ‘Barrack-Room Ballads’, written to a popular waltz tune, set to music as a tenor song, and long since passed into folklore … Recently it has been copied by Bertolt Brecht.’

The haunting words of “Mandalay” would become as much-travelled as their author. And surely only the pedantic would quarrel with the improbable siting of the dawn as it ‘comes up like thunder outer China ‘crost the Bay’.

For the historical background to the poem one cannot do better than read George Webb’s address to the Royal Society for Asian Affairs on 16 June 1983, on “Kipling’s Burma, A Literary and Historical Review”, which we have reproduced for this Guide. It was reprinted in the Kipling Journal in KJ 301/25 & KJ 302/10.

As George Webb explains, after a dispute with the Burmese Goverment, heightened by its clandestine dealings with the French, Lotd Dufferin, the Viceroy of India, despatched an ultimatum:

Meanwhile he prepared an expeditionary force in Lower Burma: 9000 fighting men, 3000 followers, 67 guns, 24 machine-guns. The ultimatum was offensively rejected. War followed. In November 1885 the great paddle-steamers, crowded with troops, thrashed up-river. Before they could reach Mandalay it surrendered. Burmese resistance had crumbled.

Some other critical responses

Bonamy Dobrée (p. 212.) discusses this and other pieces written shortly after Kipling’s return to London in 1889, in which he compares the weather unfavourably with the sunshine of India:

….the popular “Mandalay” of June 1890, well-known, perhaps, as it is set to rousing, singable tunes….. Probably his greatest successes in verse at this early period were the poems abut private soldiers, notably in Barrack-Room Ballads, where he used the Tommies’
vernacular…

Charles Allen (p. 307), however, writing in 2007, is very conscious that tastes have changed in the hundred and twenty years since the Barrack-Room Ballads were written:

The shock-value of “Danny Deever”, “Tommy” and the best of the Barrack-Room Ballads has faded over the years – and the rest have not aged well. “Mandalay” now sounds almost maudlin. Kipling’ cockneyfication seems contrived and the racial insensitivities containrd in such poems as “Gunga Din”, “Loot” and “Fuzzy Wuzzy are embarrassing, even when taken in context, which is Kipling giving voice to the Victorian working man.

For more on Kipling and Burma see:

[Title] Mandalay The main commercial centre of what was known as ‘Upper Burma’, the last royal capital, and the second largest city of present-day Myanmar. 445 miles (716 km) north of Rangoon (now Yangon) on the east bank of the Irrawaddy River. See From Sea to Sea Letter II (p.217, line 4.) 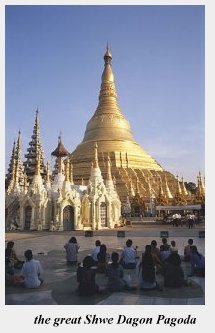 lookin’ lazy at the sea ‘lookin’ eastward at the sea’ in the original version but corrected by Kipling when it was pointed out to him that Moulmein had no view of the sun rising over the Bay of Bengal, still less over China. See the notes below on the Chorus.

On the road to Mandalay …

Had I opened the chorus of the song with
`Oh’ instead of ‘On the road,’ etc., it might have
shown that the song was a sort of general mix-up
of the singer’s Far-Eastern memories against a
background of the Bay of Bengal as seen at dawn
from-a troop-ship taking him there. But ` On ‘
in this case was more singable than `Oh.’ That
simple explanation may stand as a warning.
[Something of Myself, p. 222.)

That one should not take the words of a poem  too literally [Ed.]

the old flotilla The Irrawaddy Flotilla Company formed in 1865 to ferry troops up and down this great river. British-owned, the company operated until the 1940s. At its peak in the late 1920s, it was the largest fleet of river boats in the world. (A flotilla is 0a fleet of small vessels.)

In From Sea to Sea Letter II (p. 219, line 26.) Kipling writes: ‘the steamers of the Irrawaddy Flotilla lay like black-backed gulls upon the water.’

The company later began carrying passengers, rice, government stores, and mail from Rangoon to Prome and, in 1868, to Bhamo.

Can’t you ‘ear their paddles chunkin’ the paddle-wheels which propel the vessel (housed in the curved paddle-boxes on either side amidships) make a characteristic sound as they revolve.

flyin’-fishes Exocoetidae, a family of marine fish, with the ability to glide through the air for 50 metres or so to escape predators.

An’ the dawn comes up like thunder outer China ‘crost the Bay! As Sir George Engle (and many other readers) has pointed out in KJ 272, the city of Mandalay is 400 miles north of Moulmein, and a good 200 miles inland from the coast up the Irrawaddy River. Moulmein (also spelt ‘Mawlamyine’) is on the west coast of Burma, but in neither place does the dawn come up out of China, since the Chinese border lies some 500 hundred miles – 800 km – away from Moulmein to the north-east across mountains and jungle. 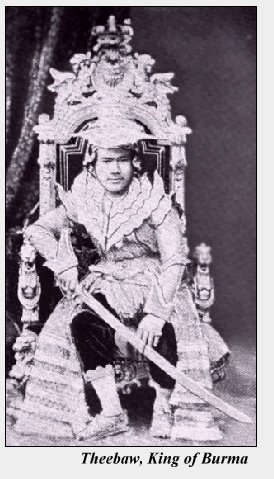 Theebaw Thibaw Min the last King of Burma, deposed by the British in November 1885.

Succeeding to the throne at the age of nineteen he massacred some eighty of his relations in order to secure his position on the throne. See George Webb.

white cheroot an open-ended cigar, probably with a wrapper made from the leaf of a betel nut palm.

Gawd Budd ‘God Buddha’, the British soldier’s idea of Buddhism, which is based on the teachings of Siddhartha Gautama, commonly known as the Buddha, in the 5th Century BC. See Kim p. 9 line 20, and Whitehead, p.140.

rice-fields rice is grown in flooded ‘paddy-fields’ which have mist over them at times.

banjo probably a Burmese stringed instrument, played with the hand, similar to the guitar. See KJ 253/49. 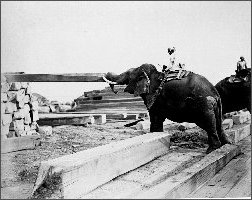 hathis pilin’ teak Hathi is the Hindi for elephant, and is used as the name of the chief of the elephants in The Jungle Books.

Here they are employed stacking timber on the dock-side, ready for export.

For more on elephants, see “Toomai of the Elephants” and others in The Jungle Book, and “My Lord the Elephant” in Many Inventions; also the verse “Muncipal”.

Teak (Tetona grandis) is a tropical hardwood used in shipbuilding and furniture.

the Bank The Bank of England, an important landmark where six roads meet in the City of London.

the ten-year soldier an experienced man of long service.

spicy garlic smells the typical aroma of spices, vegetation (and perhaps a whiff of sewage) that reminded Kipling of his childhood when he returned to India as a young man. See Something of Myself, p. 39, and “The Edge of the East” in Letters of Travel (1892-1913) . p. 34.

Strand at that time the centre of the night-life of London. Kipling lived nearby in Villiers Street off the Strand by Charing Cross Station, in rooms which are the scene of several stories.

East of Suez a phrase coined by Kipling to describe the countries of Asia. Philip Mallett (p. 63) observes: To be … east of Suez is to find relief from English weather and English morality.

Ten Commandments In Christian tradition the rules for conduct in life handed down by God to Moses and the Israelites. (Exodus,20)

awnings canvas canopies spread above the deck to provide shade from the sun.

Brian Aldiss’s rather fine Somewhere East of Life borrows its title from l. 1, and uses ll. 1-2 as its epigraph.[D.H.]