This poem was first published in The Week’s News on 7 January 1888 and the Civil and Military Gazette on 11 January.

Richards (p. 702) and Brian Mattinson both record a musical setting to “The Grave of the Hundred Dead, by Leslie Fish (Random Factors, California 2003).

In January 1886 the British annexed Upper Burma. In the ugly campaigns to suppress Burmese resistance which followed there were continuing casualties among young officers. Lieutenant R A T Dury, a year above Kipling at United Services College, had already been killed in the capture of Minhla Fort on the Irrawaddy, on 17th November 1885.

The pacification of Upper Burma, so successfully occupied the previous November, was now failing to proceed according to plan. Resistance took the form of ambush and sniping, with officers as prime targets. In early June the CMG ran a report that a Lieutenant J. L. O. Armstrong of the Hampshire Regiment and another officer had been shot by unseen snipers as they took an evening stroll outside Mandalay’s Fort Sagaing. Ruddy’s first response was “The Grave of the Hundred Head” …

Further reflection led Ruddy back to his first reaction to the news of Dury’s death seven months earlier and his remark (in a letter to Lionel Dunsterville) about ‘£1,800 worth of education gone to smash’, which he expanded into the six acerbic verses of “Arithmetic on the Frontier”. Three decades before Wilfred Owen. Kipling turns on their head his beloved Horace’s lines about how sweet and proper it is to die for one’s country:

[Wilfred Owen, who Charles Allen mentions above, perhaps the most powerful of the poets of the Great War, was killed in action a few days before the Armistice in November 1918, aged twenty-five. His shockingly realistic war poetry on the horrors of the trenches included “Dulce et Decorum Est”.]

W.E.Henley, Editor of the Scots Observer and later a friend and admirer of Kipling, reviewed Departmental Ditties and Other Verses in his issue of 3 May, 1890, observing:

Of the ten new numbers included in the present edition, the three best – “The Ballad of Fisher’s Boarding-House” and “The Grave of the Hundred Head” and “The Galley Slave” – are out of place in their environment. The themes of them are tragic, the manner befits the theme, the effect is spoiled by a certain sense of incongrulity, and to get the full effect of it you have to go back on them and take them apart from their surroundings.

For the historical background to the poem one cannot do better than read George Webb’s address to the Royal Society for Asian Affairs on 16 June 1983, on “Kipling’s Burma, A Literary and Historical Review”, which we have reproduced for this Guide. It was reprinted in the Kipling Journal in KJ 301/25 & KJ 302/10.

For more on Kipling and Burma see:

Chester no longer ‘sleepy’ but an important city in Cheshire, England on the River Dee, close to the border with Wales and a centre of local government.

Pabeng River not traced, but there is some discussion on the Internet suggesting that this may be a reference to the city of Luang Prabang and Khong Phabeng waterfall, both on the Mekong River in neighbouring Laos ? On the other hand it may be an old or poetic name for the upper Mekong ? Information from readers will be appreciated.

Subadar the chief native officer in a company of sepoys (private soldiers) in the Indian Army.

Snider a rifle with the action invented by the American Jacob Snider, adopted by the British armed forces. It was replaced by the Martini-Henry, with a different action, between 1874 and the late 1880’s. (See “Black Jack” in Soldiers Three.)

squibbed a squib is a firework which explodes with a sharp ‘crack.’

Subaltern An officer below the rank of captain in the British Army. Many appear in Kipling’s prose and verse.

Jemadar the second native officer in a company in the Indian Army.

samadh defined by a footnote as “a memorial.” See “A Sahib’s War” in Traffics and Discoveries, p. 102 line 21, for a similarly implacable, though not so gruesome, memorial.

Holy Water water blessed by a priest and used for religious purposes.

the salt they ate the Roman legionaries were paid in salt – hence salary. The implication is that having eaten their employer’s salt, they owe him an obligation.

Eshmitt an Indian pronunciation of Smith

fifty file one hundred soldiers in two ranks are counted in pairs. See ‘fikes on parade’ in “Danny Deever”.

jingal defined by a footnote as native cannon.

Calthrops iron spikes so constructed that one spike is always uppermost when thrown on the ground; a defence against cavalry that would probably discourage men on foot as well.

ball live ammunition was then so called even though the projectiles were conical.

flanking-party soldiers sent to one side of the position so the enemy would be under fire from two directions.

Five score heads and twain a score in this context is twenty, twain is two.

Boh captain of a band of dacoits. See the note to “A Conference of the Powers” in Traffics and Discoveries, p. 35, line 12. 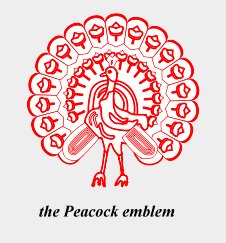 peacock banner The peacock is a sacred bird in parts of India and South-East Asia and figured in the flag of Thibaw Min, the last king of the Konbaung dynasty of Burma.