The story was published in the Civil and Military Gazette on April 11th 1887, in the first Indian edition of Plain Tales from the Hills in 1888, and in subsequent editions of that collection. See David Alan Richards p. 17, passim.

Mulvaney tells the tale of a platoon of twenty-five young soldiers, hunting dacoits (bandits) in the Burmese jungle, including himself and Ortheris. They strip naked to cross a river, fight their way into a town full of dacoits, and capture it with great slaughter, despite being heavily out-numbered. Had they been older, says Mulvaney, they would never have taken the risk, but fearless young men with a good officer could conquer anything.

This is the second of the eighteen ‘Mulvaney’ stories. Carrington (page 104) records that the Second Queen’s Regiment carried out such an operation, which was reported in the Civil and Military Gazette a few weeks before the story was written. A similar story is told of the Hampshire Regiment.

In the early days, the material that went into the deep well often came directly from Kipling’s journalism; and often re-emerged with surprising rapidity. The newspaper story of 1 January 1887 about the capture of a Burmese town by mother-naked British soldiers was out again in the paper as the short story “the Taking of Lungtungpen” on 11 April that same year. Sometimes the material must have come from stories he was told, perhaps by his mother, of her life in India while he was a child in England; many of Kipling’s Indian stories are of the 1870s and not the 1880s. Sometimes the material came from soldiers’ tales, or from the files, or from Army history.

For an account of the wider background to this tale one cannot do better than “Kipling’s Burma, A Literary and Historical Review” by George Webb. For more on the British in Burma in peace and war see “Mandalay”, “The Grave of the Hundred Head”, “A Conference of the Powers” in Many Inventions, letters II to IV in From Sea to Sea (vol. 1), and “The Ballad of Boh Da Thone.”

Lord Birkenhead complains (p. 98) that Kipling gives his soldiers remarks ‘that they could not possibly have made.’ However, this Editor, having heard men on the lower deck describing food or drink that was particularly attractive as ‘Highly Salubrious’ or ‘Highly Succulent’, finds the soldiers’ dialogue as rendered by Kipling perfectly plausible.
Birkenhead goes on to acknowledge that the three soldiers:

…are memorable figures, and they quickly gathered an enormous circle of admirers in such stories as “The Big Drunk Draf’“ , “The Madness of Private Ortheris “ and “TheTaking of Lungtunpen“.

Birkenhead also describes (p. 137) Kipling aboard the S.S. Empress of China on passage from Yokohama to Vancouver in 1892, reading “The Taking of Lungtunpen“ at a function in the saloon to raise money for the widow of a sailor who had been ost over the side. 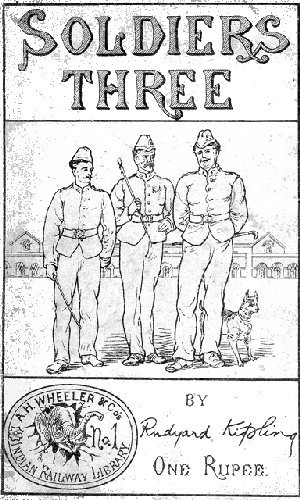 Lightweight or not, the Soldiers Three tales had the great advantage of novelty, for no writer hitherto had thought the lives of ordinary British soldiers worth writing about.

And Charles Carrington (p.106), never one for half-measures, and a survivor of four years in the trenches in the Great War, expresses whole-hearted admiration for the soldier tales:

Search English literature and you will find no treatment of the English soldier on any adequate scale between Shakespeare and Kipling.

A sentiment echoed by Marghanita Laski (p. 34), writing of the Soldiers Three:

…they stand with Shakespeare’s Nym and Bardolph and Pistol as the most famous soldiers in literature.