The two-volume collection From Sea to Sea consists of letters or travel reports written by Kipling for his newspapers between 1887 and 1889. They include both letters from journeys within India between November 1887 and February 1888, and from his journey back to England, ‘from sea to sea’, between March and September 1889. See the ‘Learn more’ panel on the right for the reports written in India before his departure.

The two volumes were first published in their entirety in America in 1899, and in England in 1900. The publication history of the individual components is covered in the introductory essay for each, as appropriate. Those discussed here can be found in:

There are a number of differences between the numbering of the chapters in these volumes and those in the original newspaper publication, because one whole letter and part of several others were omitted from the collected editions.

Kipling’s journey back to England

About May 1888, Kipling determined to return from India to England in February 1889, although it was actually 9 March 1889 when he sailed from Calcutta on a roundabout route via the Far East and North America to reach England on 5 October that year. [See Letters Vol.1,Thomas Pinney (Ed.) (Chronology).]

There is a description of the period covered by the journey in Chap.III, “Seven Years Hard” (pp.69-76) of Kipling’s autobiography, Something of Myself:

On my side I was ripe for change and, thanks always to All in a Garden Fair [by Walter Besant], had a notion now of where I was heading. My absorption in the Pioneer Weekly stories, which I wanted to finish, had put my plans to the back of my head, but when I came out of that furious spell of work towards the end of ’88 I rearranged myself. I wanted money for the future. I counted my assets. They came to one book of verse; one ditto prose; and—thanks to the Pioneer’s permission—a set of six small paper-backed railway-bookstall volumes embodying most of my tales in the Weekly—copyright of which the Pioneer might well have claimed. The man who then controlled the Indian railway bookstalls came of an imaginative race, used to taking chances. I sold him the six paper-backed books for £200 and a small royalty. Plain Tales from the Hills I sold for £50, and I forget how much the same publisher gave me for Departmental Ditties. (This was the first and last time I ever dealt direct with publishers.)

Fortified with this wealth, and six months’ pay in lieu of notice, I left India for England by way of the Far East and the United States, after six and a half years of hard work and a reasonable amount of sickness. 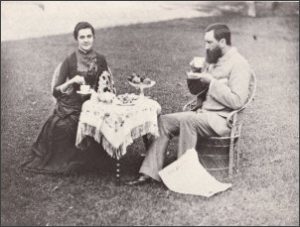 Kipling had made the acquaintance of Prof and Mrs Hill when he was transferred from Lahore to Allahabad at the end of 1887 to work for the Pioneer. The growth of their friendship is well documented in an article that Mrs Hill wrote for the April 1936 issue of the Atlantic Monthly, based on letters that she had written to relatives at the time and from her diaries. See The Atlantic site.

One should also look at Kipling’s many letters to her and her husband which are included in Thomas Pinney (Ed.) The Letters of Rudyard Kipling.

Prof Samuel Alexander Hill (1852-1890) was an Ulsterman and a meteorologist who had been appointed by Lord Salisbury to fill the chair of Science at the Muir Central College, Allahabad University, at Allahabad, India. His wife Edmonia (1858?-1952) was an American, the Methodist daughter of the Revd R.T. Taylor, President of the Beaver College for Women, of Beaver, Northern Pennsylvania. Mrs Hill was about seven years older than Kipling. (See Andrew Lycett p. 212).

It was in July 1888 that Kipling was first invited to lodge with the Hills at their house, “Belvedere”, and he stayed with them whenever he was in Allahabad until January 1889 when Mrs Hill was taken ill. When Kipling took his final decision to try his luck in London, they agreed to travel together from India via the Far East and across the Pacific. On landing in California, the Hill’s went to stay with her family in Beaver, W. Pennsylvania, whilst Kipling travelled around North America on his own. He did visit them and the Taylors towards the end of his journey. At the end of this visit to the U.S.A. he travelled to England with Mrs Hill, her cousin Edgar Taylor, and her sister Caroline to whom Kipling had become unofficially engaged, sailing from New York on 25 September 1889 for Liverpool. Prof Hill had already started back for India by this time. 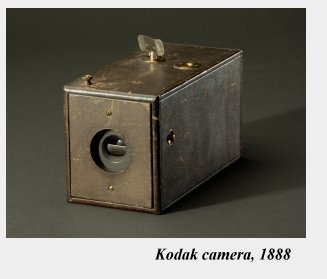 One of Prof Hill’s hobbies was that of amateur photography. He had developed considerable expertise during his time in India and Mrs Hill had prepared an album of his photographs and one of her own to be raffled in Allahabad in February 1889 for the Benefit of Trinity Church. She also persuaded Kipling to contribute some verses – “A Ballade of Photographs” – to the album. Both of these albums are now in the Library of Congress collection, LC Control No.: 2007567066 (Andrew Rutherford, Early Verse by Rudyard Kipling 1879-1889, pp.450-1, KP 27/6).

On their journey through Asia, Prof Hill continued taking photographs, as frequently mentioned in the text of From Sea to Sea. They had planned to use these for an illustrated version of Kipling’s reports but this proved to be too costly. Mrs Hill prepared an album of which there are thought to be two copies of this extant. One album of 48 prints is in the Library of Congress Carpenter Collection. (LC Control No.: 2007570095. See also paper by Debra Wynn given at the 2007 University of Canterbury 2007 Kipling Conference, published in KJ326, April 2008, p.25). Another copy of the album is recorded by Hugh Cortazzi and George Webb in Kipling’s Japan, and by David H. Stewart in Kipling’s America: Travel Letters, 1889-1895 as being in the Manuscript Collection of the Huntington Library, San Marino, California .

Kipling proceeded on his American portion of his Sea to Sea journey without the Hills and without Mr. Hill’s camera. He writes in a letter to Aleck Hill on July 2, 1889 from Livingston Montana:

You should be with me. I haven’t even a kodak and I’m moving among the lordliest scenery in a wilderness of Indians, cow punchers, herds of horses wandering loose over the prairie, pink and blue cliffs, cascades, tunnels and snow clad mountains that would make your very camera’s mouth water with envy. (The Letters of Rudyard Kipling, edited by Thomas Pinney, 1990, vol. 1, pp. 326-327)

In one scrapbook compiled by William M. Carpenter, the collector takes Kipling’s wish to heart and later attempts to re-create some of the North American leg of Kipling’s 1889 Sea to Sea trip, this time taking photographs himself.

Volume 1 of LC Control No.: 2007581631 contains photographs taken by William M. Carpenter about 1929 along the Clackamas River in Oregon which Kipling visited in 1889. A Kodak website covering the history of the Kodak cameras shows that their earliest cameras (1888-89) were factory loaded, but doesn’t say with what. However, later cameras are recorded as taking glass plates (see notes to Chapter III). In fact Kodak apparently produced four more models in 1889, all factory loaded.

Other Sources for the Texts

The definitive sources are the Letters published in the Pioneer in 1889 and 1890, because in the collected editions of From Sea to Sea and Other Sketches: Letters of Travel published in 1899 and 1900, Kipling had edited the originals and cut some of the material.

More recently, there are two books where the authors have returned to the original material published in the Pioneer. These both include commentaries and explanatory notes for the parts of the journey that they cover, and both have additional material on other journeys that Kipling made to Japan and the U.S.A. respectively. The full details are:

Both of these books also include material from Kipling’s subsequent travels in these countries.

It is mentioned by Hugh Cortazzi and George Webb in Kipling’s Japan that the original manuscripts of From Sea to Sea are in the Manuscript Collection of the Huntington Library, San Marino, California. The Library of Congress also has photostat copies from Huntington in its Carpenter Collection in scrapbook 1 of 7 (LC Control No.: 2007581632). These cover the Letters for the journey from India through Japan together with some stories that were written at this time.

Lastly, mention must be made of American Notes, the unauthorised extracts from Kipling’s Letters which were first published as a book of seven chapters by M.J. Ivers & Co, New York in 1891.

Three of the biographers have given extensive resumés of this journey in their works; Charles Carrington, Harry Ricketts, and Andrew Lycett.

The general conclusion is that Kipling was in a holiday mood during this journey, but that when he reached America, despite his admiration for individual Americans, he let his guard down to the Press and made comments about America for which he was soon made to suffer. Even so, he clearly had an enjoyable time there, and it was only Chicago with its abattoirs and meat-packing plants that he really disliked.

It is often not realised that whilst Kipling was writing this series of travel reports for the Pioneer in Allahabad, he was also writing fiction based on these travels for the sister-paper in Lahore, the Civil and Military Gazette. Several of these were finally collected in Abaft the Funnel, initially in an unauthorised volume, and then by Kipling in 1909 who considered that his hand had yet again been forced.

The details of the stories and their publication are given in our notes on Abaft the Funnel .