First Publication of the Individual Letters of Marque

A ‘Letter of Marque’ was a commission issued by a belligerent state to a private person permitting him to employ his vessel as a ship of war. A ship so used was a privateer. The Congress of Paris 1856 abolished privateering which finally became obsolete with the Hague Convention of 1907. (International Rules for the Conversion of merchant ships into warships.)

Since November last I have been a vagabond on the face of the earth. But such a vagabondage! Did I tell you how the Pioneer took me over and bade me go out for a month into Rajputana—the home of a hundred thousand legends and the great fighting pen of India. They gave me did my generous masters Rs 600 a month and paid my railway expenses. Ach Himmel. Was there anything like that dissolute tramp through some of the loveliest and oldest places upon the face of the earth.

I wrote a series of letters called “Letters of Marque” – by the way it is running still – and I railed and rode and drove and tramped and slept in Kings’ palaces or under the stars themselves and saw panthers killed and heard tigers roar in the hills, and for six days had no white face with me, and explored dead cities desolate these three hundred years, and came to stately Residences where I feasted in fine linen and came to desolate way side stations where I slept with natives upon the cotton bales and clean forgot that there was a newspapery telegraphic world without.

Oh it was a good and clean life and I saw and heard all sorts and conditions of men and they told me the stories of their lives, black and white and brown alike, and I filled three note books and walked “with death and morning on the silver horns” [Tennyson, “The Princess”, vii.189] and knew what it was to endure hunger and thirst.

The results were these nineteen articles which can be said to be Kipling’s description of life in the semi-Independent States of India. They were ruled by hereditary Princes under the advice of the British Crown, the States and their rulers being watched over and supervised by a succession of senior British officials known as Residents until India was granted Independence in 1947.

Andrew Lycett in his biography Rudyard Kipling, Chapter VII, “Allahabad and Home (1887-1889)” pp.202-205 of the Phoenix paperback, gives a clear and interesting summary of this journey through Rajputana.

See the notes by Brigadier Mason on “The Geography of Rajputana”, and by David Page on Railway Development in Rajputana to 1888.  Also the Map of Kipling’s India based on the one in the Carringtom Biography.

The Letters were also all published in the Pioneer Mail, usually within a day or two of appearing in the Pioneer. Extracts also appeared in the Week’s News.

Publication history of the collected series

In 1891 Messrs. A. H. Wheeler & Co. proposed to publish an Indian Edition of Letters of Marque in one volume and an English Edition in two volumes. The Indian Edition and Volume I of the English Edition were printed and were in the process of being bound when publication was suppressed by Kipling, who ordered that the entire stock be destroyed. Kipling had, of course, by this time left India for good.

The Indian Edition of 1,000 copies was partly destroyed—all but one hundred or so, but only six of the English Edition are known to have survived. These contain the first eleven articles or chapters only. (The second volume was not printed.)

In 1895. an unauthorised American collection was published under the title Out of India by G.W. Dillingham Co., New York, which also included the material from The City of Dreadful Night and Other Places. The Kipling Journal No.180 for December 1971, pages 13-15, has an article by Dr F.A. Underwood on “The Text of Letters of Marque” which compares the various versions of the reports submitted to the Pioneer.

Thus, the series did not appear in England until 1900, when Kipling revised the Letters for inclusion in the two-volume Authorised Edition of From Sea to Sea (and dated 1899 in the U.S.A.). For Kipling’s chapter headings for these editions and links to notes on individual chapters click here
Notes to the individual Letters of Marque 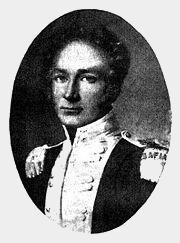 Most of the notes in the ORG were prepared by Brigadier A. Mason M.C, R.E., (1891-1965), and they are so exhaustive that the present editor has made very few amendments to them. Brigadier Mason was in part guided by James Tod’s Annals and Antiquities of Rajasthan, Second Edition (1873)
James Tod, (1782-1835)

Tod (right) was an army and political officer in India who had gone out to Bengal in 1799. From 1812 to 1817 he was constantly surveying or collecting topographical information. In 1815 he submitted a map to the governor-general (Lord Hastings), in which for the first time the term ‘central India’ was applied to the Indian states later under the central India agency. Rajputana was also included in the area of his researches. He wrote:

Though I never penetrated personally further into the heart of the Indian desert than Mundore … my parties of discovery have traversed it in every direction, adding to their journals of routes living testimonies of their accuracy, and bringing to me natives of every t’hul from Bhutnair to Omurkote and from Aboo to Arore. The journals of all these routes, with others from Central and Western India, form eleven moderate-sized folio volumes.
[Tod, Annals of Rajasthan, 2, 1832, 289].

In 1818, after the chiefs of Rajputana had accepted the protective alliance offered to them, Tod was appointed by the governor-general political agent in the western Rajput states.
Tod left Bombay for England in February 1823, and never returned. The rest of his life was mostly spent in arranging and publishing the immense mass of materials accumulated during his Indian career. [Extracted from the Oxford Dictionary of National Biography].

Kipling refers to Tod and his work in ten of the Letters (No. VII onwards), usually more than once. Although not stated, it certainly appears that he used the Annals as a reference source for this journey and in Letter XVIII comments:

Read Tod, who is far too good to be chipped or sampled; read Tod luxuriously on the bund of the Burra Talao, and the spirit of the place will enter into you and you will be happy.