This series of three articles, collected in From Sea to Sea vol.2, reports on Kipling’s visit to the East India Railway Company’s coal-field at Giridih in late-January early-February 1888, previsioned at the end of Chapter III of Among the Railway Folk. Giridih is just to the west of the western side of ‘the long siding’.
See the Introduction to these volumes for more information about his journey.

First publication of the articles was on August 24th, September 6th and September 20th 1888 in the Pioneer. They were also also published in the Pioneer Mail, probably shortly afterward, and also appeared in the Week’s News.

These three articles were collected in The City of Dreadful Night and Other Places which was published in 1891 by A.H. Wheeler in India and together by Wheeler and Sampson Low, Marston & Co. in England..  In 1900 they were collected in volume II of From Sea to Sea published by Macmillan in the Library Edition of KIpling’s works.

We have not found any critique of this series of articles, although
Andrew Lycett in his biography Rudyard Kipling mentions the visit on p. 209 of the Phoenix paperback.

Kipling’s fiction based on his visit

“At Twenty-Two”, the story of a blind coal miner, was first published in the Week’s News of 18 February 1888 and later collected in In Black and White. The timing ties in very closely with Kipling’s visit to Giridih, and he must have drawn on what he saw and heard there for the technical details of the story.

The first line of the EIR was opened in 1854, was broad gauge (5ft 6in), and ran from Howrah, just across the Hughli river from Calcutta, to the town of Hugli, a distance of 21 miles. By 3 February 1855 the EIR’s ‘experimental’ track for a Calcutta-Delhi route now consisted of a Howrah to Raneegunje (Raniganj, collieries near Asansol) section of 121 miles. Then by 1862 EIR’s Delhi-Calcutta route had progressed as far as the west bank of the Yamuna, via Mughalsarai, and by 1866 Delhi and Calcutta were directly linked by rail.

The first EIR railway workshop had been established in Howrah but found to be unsatisfactory, so the Jamalpur workshops were set up on 8 February 1862. These were the first full-fledged railway workshop facilities in India, and drew upon the skills of the communities of gunsmiths and other mechanical craftsmen in nearby Bihar (or Behar). See the IRFCA web-site.
Other Internet resources 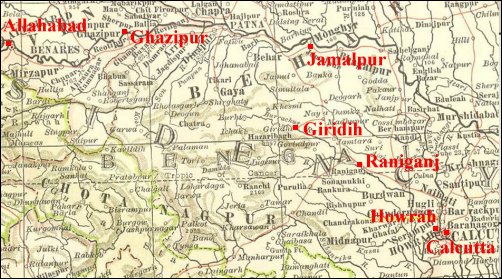 This is a section of a 1902 map of North East India, in which the railway lines are shown in red.

We have added in red the places visited by Kipling on this journey, Allahabad in the north-west where the Pioneer offices were located, Ghazipur where he visited the opium factory, Jamalpur, the site of the EIR railway workshops, the Giridih coalfield to the south and slightly west of Jamalpur towards the centre of the map, and Raniganj down the line towards Howrah and Calcutta at the south-east corner of the map. The distance from Allahabad to Calcutta as the crow flies is some 500 miles (800 km).

The whole map is to be found on:
the Century Atlas website.