This series of three articles, collected in From Sea to Sea, vol.2, reports on Kipling’s visit to the East India Railway headquarters at Jamalpur in January 1888. This Jamalpur is just south of the Ganges, about 80 miles east of Patna. It should not be confused with another town of the same name about 200 miles further to the east on the Brahmaputra River.

In November 1887 Kipling was transferred from the Civil and Military Gazette in Lahore to the Pioneer in Allahabad. In a diary letter to his cousin, Margaret Burne-Jones, of 25 January – 24 March, 1888 (Letters Vol.1, ed T. Pinney, pp.149-156), he wrote beginning on 25 January:

. . . In my absence, in Rajputana, [November and December 1887 with results that appeared as Letters of Marque] the Pioneer had started a new weekly paper and I, as the author of Plain Tales from the Hills was advertised as the writer of a series of “Anglo Indian Studies”. On my return to Allahabad—the place where the Pioneer is printed—I had to turn to and hatch out stories; for they had told me nothing of this new departure. One of my proprietors made me welcome for a month and I worked like a nigger, because I love him, and would do anything for him and went to all the dances and dinners that were going for thirty days. Then they cut me adrift afresh, bidding me chuse my own ground for exploration. I have taken the 19th century and the Railway colonies in India, and the opium factories and the out of the way life of Calcutta, and Benares, and a relic of the Mutiny for my subjects and am come here to Jamalpur, which is a sort of Crewe of Eastern India, where men make locomotives and control many hundreds of miles of lines.

Been out on business all day in soft warm drenching rain and return to you now, having competely lost the thread of my egoistical argument. Where was I? At Jamalpur. It’s a wonderful place and I see that I shall have my work cut out to describe it. I’ve got my first harvest of notes and have been writing out for three hours continuous. . .

Be shot if it is. The blot has runned away all down the page and I’ll get you another as soon as ever I get to Calcutta if I live. I’ve had a riotous day cutting about over the “shops” and inspecting 120 diseased locos, a quarter of a million of pound’s worth of stock and goodness knows what all. It’s all down in a notebook somewhere but I’m too dead fagged to write it out (and there is an “interesting” tale for the week after next to be written) and so I fly to you for consolation. Tomorrow I go to a big meeting of the local Masonic Lodge. Curious thing to think that though I’ve come south 980 miles I am certain tomorrow of finding men who will talk to me as though they had known me all their lives on subjects on which both I and they will be able to discourse about with freedom and camaraderie. Let us hope they’ll give me some decent material for Studies. I’m in low water again. . . 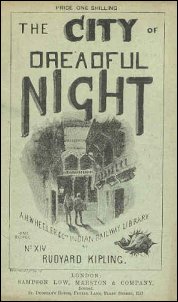 These three articles were collected in The City of Dreadful Night and Other Places which was published in 1891 by A.H. Wheeler in India and together by Wheeler and Sampson Low, Marston & Co. in England as no.XIV in the Indian Railway Library series.

I have not found any extended critique of this series of articles although Andrew Hagiioannu in The Man who would be Kipling, 2003, pp.45-46, does quote from it.
Andrew Lycett in his biography Rudyard Kipling, Chapter VII, “Allahabad and Home (1887-1889)” p. 209 of the Phoenix paperback, gives a brief summary of this visit to Jamalpur. 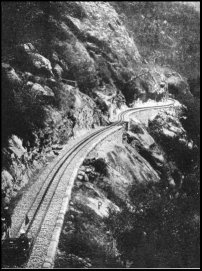 The first line of the EIR was opened in 1854, was broad gauge (5ft 6in), and ran from Howrah, just across the Hughli river from Calcutta, to the town of Hugli, a distance of 21 miles. By 3 February 1855 the EIR’s ‘experimental’ track for a Calcutta-Delhi route now consisted of a Howrah to Raneegunje (Raniganj, collieries near Asansol) section of 121 miles. Then by 1862 EIR’s Delhi-Calcutta route had progressed as far as the west bank of the Yamuna, via Mughalsarai, and by 1866 Delhi and Calcutta were directly linked by rail.

The first EIR railway workshop had been established in Howrah but found to be unsatisfactory, so the Jamalpur workshops were set up on 8 February 1862.

These were the first full-fledged railway workshop facilities in India, and drew upon the skills of the communities of gunsmiths and other mechanical craftsmen in nearby Bihar (or Behar).See the Indian Railways Fan Club website.

Kipling’s Fiction based on his Visit

“The Bold ’Prentice” collected in Land and Sea Tales for Scouts and Guides was first published in 1895, seven years after Kipling’s visit to the Jamalpur works.