This letter was not part of the original series and did not appear in the Pioneer. It was published in The New York Herald for 17 August 1890, in The Scotsman for September 1890 (as “Interviewing Mark Twain”), and in the Civil and Military Gazette for 23 September 1890. [See David Alan Richards A131, p.125]

In a very short journey, Kipling travels less than 200 miles south-east across New York State from Buffalo to Elmira to meet Mark Twain, the pen-name of Samuel Clemens, who wrote many distinguished works, including Huckelberry Finn, Tom Sawyer, and Life on the Mississippi. Clements was the in his fity-fitth year. Kipling was twenty-three.

Over the twenty years from this first meeting until Samuel Clemens’ death in 1910, he and Kipling became good friends, despite some disagreements. For example, a letter to Kipling of August 1895 from Clemens displays the tone of this very clearly:

DEAR KIPLING–It is reported that you are about to visit India. This has moved me to journey to that far country in order that I may unload from my conscience a debt long due to you. Years ago you came from India to Elmira to visit me, as you said at the time. It has always been my purpose to return that visit and that great compliment some day. I shall arrive next January and you must be ready. I shall come riding my ayah with his tusks adorned with silver bells and ribbons and escorted by a troop of native howdahs richly clad and mounted upon a herd of wild bungalows; and you must be on hand with a few bottles of ghee, for I shall be thirsty.
Affectionately,
S. L. CLEMENS. 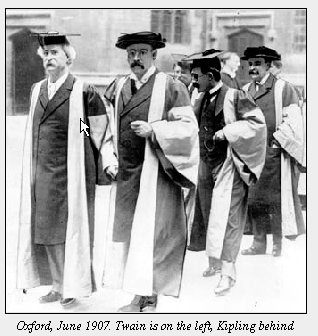 In 1907 they were both presented with the honorary degree of Doctor of Letters at Oxford University, and whilst waiting together ‘slipped away to smoke under an archway, with guilty apprehension, until they were summoned to the [Sheldon] theatre’.

[Title, Page 182] Mark Twain was the pseudonym used by Samuel Langhorne Clemens (1835-1910), derived from a call of the leadsman on the Mississippi steamboats declaring that he had a depth of two (twain) fathoms (six feet) beneath the vessel. By the time that Kipling met him, he had published almost half of his total published writings, including Tom Sawyer and Hucklebury Finn.

[Page 182, line 1] over yonder Kipling is still addressing an audience in India.

[Page 182, line 4] the Mall was the main street of Simla (now Shimla), the summer seat of the Indian Government of the time.

[Page 182, line 14] Hartford, Connecticut. This is the city in which Samuel Clemens and his wife Olivia set up home in 1871.

[Page 183, line 8] Elmira is a city in the south of New York State, just on the border with Pennsylvania on the Chemung River. Mark Twain’s links to both Hartford and Elmira are described later in this Chapter (pp.194-6).

[Page 183, line 11] ‘Slide, Kelley, slide’ is a reference to Michael Joseph “King” Kelley (1857-1894), one of the best-known baseball players of his era. The phrase was turned into a popular song. When running hard to get to a base before the baseman can catch the ball and dismiss him, a striker may slide the last couple of yards to make his ground. 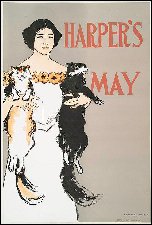 [Page 184, line 16] Harper’s Magazine was founded as a monthly magazine in 1850 by Fletcher Harper in New York, when he became aware of the success of the Illustrated London News. The magazine was also a great success and in 1857 the Harper’s company began publishing Harper’s Weekly. ‘Harper’s Magazine cows’ would have looked very elegant.

The two magazines became regular publishers of Kipling’s works, the first appearance being “The Man who Was” in the April 1890 issue of Harper’s Weekly [David Richards C495] But see the note on ‘the copyright question’ below.

[Page 185, line 20] skidding the wheel applying a steel shoe on a chain to the tyre of the wheel to act as a brake. [ORG]

[Page 186, line 9] cob-pipe a pipe for smoking tobacco with the bowl made from a maize corn-cob. Kipling had been an enthusiastic pipe-smoker since his ‘teens. See “The Maid of the Meerschaum.”.

[Page 186, line 9] Missouri meerschaum a nickname for the corn-cob pipe. Meerschaum is a lightweight, soft, white mineral used principally for the production of carved pipes, frequently in very elaborate shapes. Both materials develop a colour from the act of smoking them, and both provide a cool smoke.

[Page 187, line 2] the copyright question There was considerable discussion amongst authors in the late 19th and early 20th centuries over the question of international copyright as there was nothing to prevent a publisher in one country taking the work of an author in a different country and republishing it without permission. It then depended on the good nature or moral rectitude of the publisher as to whether he made any royalty payments to the author.

Kipling came across this phenomenon in Yokohama when about to travel to Nikko and found that copies of his own work were to be published and sold without his permission by the “Seaside Publishing Company” in America. He wrote what became known as the “Yokohama Curse”, included as the first section of the letter published in the Pioneer on 9 November 1889, a version of which became Chapter XIX of From Sea to Sea, but with the “Curse” edited out. We have reproduced the text here.
More details can be found in the Kipling Journal no.222 pp.29-31 and no.224 pp.29-30.

On his way to England Kipling was introduced to Henry Harper, of Harper and Brothers, who snubbed him: ‘Young man, this house is devoted to the production of literature’. See Andrew Lycett (p. 178). However, in 1890, Harpers acquired serial rights for a number of his stories for publication in Harper’s Weekly, for which they duly paid. In September 1890, as Lycett (p. 226) recounts, they informed him that, without his prior permission, they intended publishing a cheap edition of six of his stories. Kipling was furious. See our notes on “The Rhyme of the Three Captains” (1890), in which he attacks three leading British literary figures for not supporting him against Harpers.

As has been noted, Kipling and Clemens became friends, and Clemens supported Kipling as a witness in a lawsuit for piracy against R.F. Fenno & Co in 1900. Details, sources and links to other sources can be found in the Editorial to the Kipling Journal no.320, pp.6-9.

[Page 193, line 22] Star of India This was the senior of the Orders instituted in 1861 by Queen Victoria, Empress of India, for special services to India.

[Page 195, line 6] Salon pictures as noted in Chapter XXIII, in the early 19th century a group of French artists formed themselves into a Salon. They held regular exhibitions of their works which included many nude studies.