The edited text largely corresponds with that first published in the Pioneer of 30 November 1889, save that two sentences were omitted from the much-quoted passage on p. 451, lines 16-18, which refers to the vulnerability of San Francisco to naval attack. The passage omitted was:

… also there is not a single American vessel of war in the harbour. This may sound blood-thirsty: but remember I have come with a grievance upon me — the grievance of the pirated English books…

The grievance was Kipling’s discovery, before leaving Yokohama, of copies of his books for sale, published by an American publisher without permission or payment of royalties, The inclusion of this passage in the collected edition would have reduced his apparent hostility from a political to a personal level, as George Webb has suggested.

In 1989, George Webb, then Editor of the Kipling Journal, wrote an article based on his research into the 1889 defensive situation at Golden Gate, reading what San Francisco newspapers were publishing at the time. It appeared as an editorial in the December 1989 issue of the Journal, KJ 252.

An 1896 schematic map of the city of San Francisco, with many buildings identified, can be found at this web-site.

There is a series of letters written by Kipling during his travels through America. They can be found in Vol.1. of The Letters of Rudyard Kipling, edited by Thomas Pinney, pp.309-348. The majority are addressed to Mrs Edmonia Hill and are well worth reading in conjunction with this American section of From Sea to Sea, as are Prof. Pinney’s notes. Where appropriate, they will be referred to in this Guide. 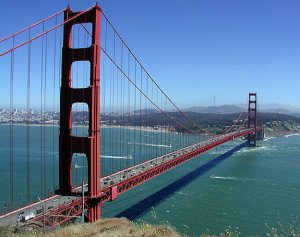 [Epigraph, page 471] Serene, indifferent to fate… This six-line stanza is made up of three couplets from the first five in Bret Harte’s (1836-1902) poem San Francisco, from the sea”.

[Page 471, lines 16-18] Golden Gate is the strait leading from the Pacific Ocean into San Francisco Bay with the city of San Francisco on its southern shore. The strait is about 2 miles wide and was so-named at the time of the 1849 gold rush.

The Golden Gate Bridge was not built until 1933-37, some 45 years after Kipling’s arrival. (see George Webb’s article). 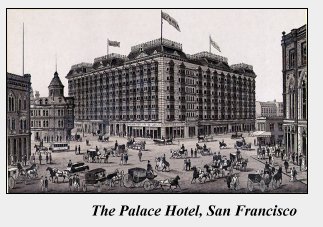 [Page 472, line 27] the Palace Hotel The Palace Hotel in San Francisco opened on 2 October 1875, the result of William Ralston commissioning an architect to study the finest hotels in Europe and to design one that outdid them. Kipling stayed here from his arrival on 28 May until 17 June 1889. He also refers to it in “Her Little Responsibility” (Abaft the Funnel)

The hotel largely survived the earthquake of 1906, but was severely damaged by the fire that followed. It was splendidly rebuilt.

[Page 472, lines 29 to 33] the lowest place . . . brings you there Kipling had presumably landed at the P.M.S.S. Wharf at the SE end of First St. About six blocks NW is Market St and he would have had to turn left (or SW) along Market until he reached the junction with Geary St.

The Palace Hotel is marked as being at this point, so the instructions to find Gutter and Sixteenth don’t appear to make much sense, as acknowledged in the next paragraph. ‘Gutter’ could be a mistake for ‘Sutter’ which is in the area and runs parallel with Geary, but Sixteenth is a long way to the south. 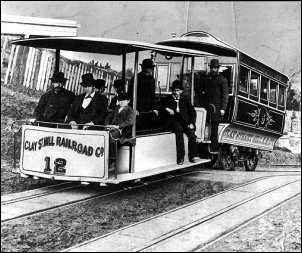 [Page 473, line 16] a cable-car Market Street was one of the main cable-car routes. The system operates by the use of a steel cable which is running constantly in a channel under the street, the cable being guided by a series of pulleys and sheaves. The car runs on two tracks laid in the street, with a slot between them that gives access to the cable. A vice-like lever mechanism on the car called a grip is lowered into the slot, and when the gripman (or driver) pulls a lever, the grip is tightened and the car starts to move. To stop the car, the grip is released and if necessary, up to three brakes are applied as well.

The first car ran in 1873 in Clay Street, and the network reached its maximum coverage of the city in the 1890s. Over the years, the network slimmed down to three routes, and in the mid-1980s it was shut down for two years and refurbished, so it still operates in the way that Kipling experienced in 1889.

The information here has mainly been gleaned from the website of the Cable-Car Museum.

[Page 475, line 8] Whitaker This refers to Whitaker’s Almanac one of the great British reference books. It is published annually. It first appeared in 1868 and is still (2010) in production.

[Page 476, lines 10 & 11] bad Salon pictures In the early 19th century a group of French artists formed themselves into a Salon. They held regular exhibitions of their works which tended to be nudes. The implication here is that crude copies of these French pictures were exhibited in the San Francisco bar. [ORG]

[Page 476, line 28] Bikaneer Desert part of the Thar or Great Indian Desert in north-west India in Rajputana, the Punjab and Sind (the latter now in Pakistan). Kipling had visited the general area in 1887 as he described in Letters of Marque.

[Page 478, lines 1 & 2] Oliver Wendell Holmes (1809-1894) was an American physician, professor, lecturer and author of both prose and poetry, best known for his book The Autocrat of the Breakfast Table. The quotation has not been identified.

[Page 481, line 20] bunco-steering Persuading a person to gamble. The Washington State Legislature on Gambling in Chap.9.47.120 defines this as:

[Page 482, line 14] O-Toyo She was a lady in a tea house which Kipling had visited outside Nagasaki, ‘ebon-haired, rosy-ckeeked, and made throughout of delicate porcelain. See Letter XI. 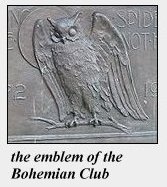 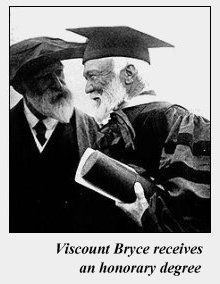 [Page 484, line 26] riata-throwing throwing a lasso or lariat to capture an animal.

[Page 485, line 24] Bryce James Bryce, 1st Viscount Bryce (1838-1922). He was born in Belfast, studied at Oxford, was a jurist, and wrote The American Commonwealth in 1888, a significant study of United States political institutions.