This story first appeared in December, 1897, in England in Pearson’s Magazine, and in America in McClure’s Magazine. In Pearson’s there were four illustrations in colour and nine others. The artists’ signatures are not entirely clear, but one of them is Paul Hardy, and another appears to be Swain (Senior), and a third, Pitt.

Kipling was working on this story – see Charles Carrington (p. 230) – in Vermont in the winter of 1895/6, though it may have not been completed until after his return to England in September 1896. He must have based it on recollections and secondary sources, although he had had some brief contact with Bhils, as beaters while hunting wild boar near Udaipur in January 1888, in the course of his journey through Rajasthan as a special correspondent. See Letters of Marque.

Philip Mason, who served in the Indian Civil Service for twenty years, gives an excellent account of this story in his masterly study of Kipling and his work:

It is about the tradition of serving in India, which in a few English families, lasted for the best part of two hundred years, and about the curious relationship which sometimes grew up between British officers and aboriginal tribes in India, primitive peoples despised by those of Aryan speech and Hindu religion. The hero of the story, John Chinn, came of such an English family and his grandfather, also John Chinn, had managed to win the confidence of just such a people, the Bhils, and had been buried among them. He had died young, but the government of the day had been impressed by his success in bringing the Bhils into reasonably peaceful relations with their neighbours, and had built a tomb over his body. It was treated as a shrine by the Bhils and the first John Chinn had become a local godling; the Bhils believed that he rode out at night, wearing his top-hat, on a clouded tiger – clouded not striped – when any fearful event was threatened.

The second John Chinn was physically very like his grandfather and came to be regarded as his re-incarnation. He did not at first understand this but, when he did, he made use of the semi-divine honour in which the Bhils held him to save them from terrible trouble. They fell into a panic when a vaccinator came with his knives to protect them against smallpox. It was the kind of panic that might lead to raids on other villages, the theft of cattle and all kinds of madness, which in turn might have led to a punitive expedition. They might easily have killed the vaccinator. But it was all settled peacefully owing to John Chinn’s divine status, his confident commonsense and his prowess with a rifle. He shot the clouded tiger, which was real, and laid the ghost of his grandfather.

As Philip Mason points out, Kipling must have read the account by Bishop Reginald Heber, who was Bishop of Calcutta from 1823-1826, in A Journey through the Upper Provinces of India from Calcutta to Bombay 1824-1825:

There is a passage in Bishop Heber’s account of his journeys in India in which he describes the achievement of a young man, Augustus Clevland (so Heber spells it), who had learned the language of the Sonthals, a primitive hill people in Bihar, persuaded them to sell `wax and honey’ to the people of the plains, to accept his authority, and submit to his judgment instead of fighting – just like John Chinn the Elder. The Sonthals live several hundred miles to the East of the Bhils and Augustus Clevland in real life died sixty years before John Chinn in the story – but the government of the day really did put up a monument to Clevland’s memory, and he was remembered as something very like a deity a hundred and fifty years later.

The younger John Chinn found on his grandfather’s tomb – hung about with packets of wax and honey – a half-obliterated inscription, of which the words come from Clevland’s tomb; all Kipling has done is to alter the name and date and a word or two and then rub out some of the letters. On the other side, were `ancient verses, also very worn’.

This does not come from Clevland’s monument, but from some verses written about Clevland by Sir John Shore, who was Governor-General of India after Lord Cornwallis. He was Clevland’s cousin and had been very fond of him. Shore wrote:
… the savage band
Forsook their haunts and bowed to his Command
And where the warrior’s arm in vain assail’d
His gentler skill o’er brutal force prevail’d …
Now mended morals check the lust for spoil
And rising Hamlets prove his generous toil …

But Clevland died when he was twenty-nine and unmarried. The Chinns were a dynasty who all came to India; they were all first class shots and could sit up in the jungle all night without getting fever. In all these respects – as Charles Carrington (p. 230) has recorded – they reproduced the traditions of the Outram family. Kipling took the facts about Clevland from Bishop Heber and the two inscriptions from Clevland’s tomb and Shore’s funeral ode. To them he added the tradition of the Outram family, shifting Clevland’s story sixty years later to suit his purpose …. 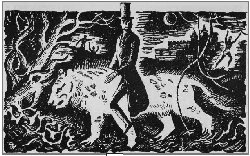 I do not know where he found the clouded tiger, but perhaps he had seen, as I have, on the walls of a village temple, the crudely drawn figure of an Englishman in a top-hat, strangely sedate by the side of Krishna and the milkmaids and Hanuman the monkey-god. [Philip Mason]

As will be seen from the Notes on the Text Kipling’s account of the “Wuddars” is also soundly based on the historical record.