First published in the United States of America in Liberty of 7 June 1930 illustrated by Herbert M Stoops (1888-1948) and in the United Kingdom in Cassell’s Magazine of August the same year, illustrated by G. L. Stampa (George Loraine Stampa, 1875-1951), well known as an artist for Punch, a humorous weekly magazine unfortunately no longer published.

Collected in Thy Servant a Dog told by Boots (illustrated by Stampa) the same year, together with two other stories, “The Great Play Hunt” and “Toby Dog”; it later appeared in various anthologies, including Collected Dog Stories (also illustrated by Stampa), the Sussex Edition, Volume 16, page 249, the Burwash Edition, Volume 14, and Thy Servant a Dog and other Dog Stories, from which we have taken the page and line references for the Notes on the Text in this Guide. This collection includes:

The story is told by Boots, a black Aberdeen terrier very similar to those owned by Kipling over the years which obviously inspired his verse “The Power of the Dog”. Boots lives in London with his master. While walking in the park they meet another Aberdeen named Slippers, owned by a young woman, (Polly). 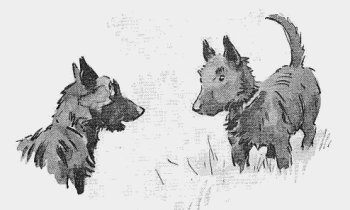 The dogs fight, the owners separate them with mutual apologies and all walk off together. The dogs become friends, the man and woman marry and live in a house on a country estate with, like the well-to-do upper and middle classes of the time, a staff of servants. There are houses of varying size on the estate, some occupied by members of the family, with other cottages and lodges for members of staff.

The dogs meet a hound puppy named Ravager and all misbehave, chasing various animals and killing a rat during the unexplained absence of their owners who eventually return with a baby (his name is Digby, p. 87) which is pleased to see the dogs. All get on very well together with the exception of Kitchen Cat, an unpleasant character reminiscent of “The Cat that Walked by Himself” (Just-So Stories) but more spiteful. (Readers of that story will recall that Kipling stresses the eternal hostility between Cats and Dogs).

There are various activities involving other characters which include hounds, dogs, a retired and almost domesticated lame fox, and people. They save Nurse and the baby Digby, from the bull. The hunt comes to blood Digby who is delighted to meet the hound Ravager, who had escaped death for physical defects and is now a successful member of the pack. The story ends with Digby calling Boots and Slippers his own hounds.

Charles Carrington (p. 476), sets the dog stories in the context of Kipling’s life and work:

It is an old joke in the book trade that two classes of books will always find a market in England, books about doctors and books about dogs. After his medical stories Rudyard indeed turned to the other category and enjoyed his last success with dog stories, in a new mode. He had always been a dog-lover, and, from his earliest days as a writer, had introduced some favourite dogs into his stories about people. In “Garm, a Hostage” and “The Dog Hervey”, the dogs had been among the leading characters, but dogs seen through the human eye. His beasts, in the Jungle Books and elsewhere, had been treated allegorically, in another traditional style, as characters personified appropriately, like Circe’s swine, in some animal garb that suited them.

“Thy Servant a Dog”, published in 1930, was not a beast fable in the conventional form, but a genuine attempt to present a dog’s point of view, in a simplified vocabulary which seemed adequate to a dog’s intelligence, an experiment in the rudiments of language … He had submitted to a dynasty of Aberdeen terriers … on whom he turned his exact and penetrating gaze, to the renewed delight of his readers, who bought 100,000 copies of “Thy Servant” in six months.

The attribution of human speech and other characteristics to animals (anthromorphism) in folk-lore, nursery-rhyme and stories for children goes back to the Fables credited to Aesop (620–560 BC), to Biblical times, and beyond, with later examples like the Brer Rabbit stories collected by Joel Chandler Harris (1848-1908) quoted in Stalky & Co. and The Jungle Books. T.S. Eliot’s Nania is one modern example of many.

Kipling’s series, however, is different in that Boots is able to talk, though with a very limited vocabulary. While reporting what he sees and hears, unlike Kipling’s jungle animals he lacks understanding of what is going on. He is, in fact, the epitome of a literary device so often used by Kipling, the imperfectly-informed narrator. The cleverness of the writing, however, enables the reader to understand the action, even though the dog does not.

ORG Volume 6, page 2904 quotes the late Colonel P. S. Kennedy-Shaw who had been a Master of Foxhounds in his time:

Though personally I dislike the method of presenting it in dog-language, “The Great Play Hunt” is an amazing tour-de-force. No sporting writer could have done better. It abounds in little touches which make one wonder once more – where does he get it from ?

To most foxhunters the map of England is, not so much divided into shires as into hunting countries, and it would seem as if Kipling was aware of it. He knows that the Cotswold adjoins the Heythrop and much more. He tells us of poultry farmers who trap foxes and then claim damages from two Hunts through living on the boundary. Every hunt-secretary knows that type only too well.

Martin Fido (p. 138) reports the record sales of the collection, but missing the point and with a singular lack of humour goes on to assert that the work almost doomed Kipling’s serious reputation: ‘Few major writers have written so bad a book: almost none in their maturity.’

However, a contemporary reviewer in The Times (October 28 1930) took the collection rather more seriously:

The superior and the humourless may find Mr. Kipling’s stories of dogs light or even trivial entertainment, but those who know how to enter into their spirit will be very well content with them. Light indeed they are, nor would one compare them with some of his best animal stories of old times. Yet they are deft and charming, bubbling with fun, touched with pathos, full of acute observation. Their cleverest feature is the limitation of the dogs’ world. The human beings are seen through their eyes only.

There is waiting for Gods going walks. If it is nothing-on-their-tops , it is only round the garden and “get off-the-flower-beds-you-two!” If it is wet it is hearth-rugs by fire, or “Who-said-you-could-sit-on-chairs-Little-men ?” It is always being-with Own-Gods.’

Mingled with the tale of the little terriers are episodes connected with the neighbouring pack of foxhounds and especially with Ravager, their friend and confederate. We meet Ravager first as a puppy at walk; then, after a long gap during which he has become one of the leading hounds of the pack, he comes back, crippled by a motor-car, to live as a pensioner in the company of his old friends. Poor Ravager’s death brings the book to its end on a note of tragedy.

The other great character is Toby Dog, the disgraceful performer in a Punch and Judy show, who “held rat records at three pubs” , and, after some shameful beginnings, proved himself as a good and true temporary member of the household. Temporary only, because it was his “Own God’s” method to sell him for the winter when times were slack and whistle him back again when he was needed. Of the truce which was made with Kitchen Cat, of the great run for a young human staged by the terriers with Ravager and an old lame for of their acquaintance , of the undogful parlour tricks of Toby Dog, and their effect upon Ravager’s base rival Upstart, of the terrible business when the same young human called his governess a boney old Lady-Hound and the terriers went to rescue him from the fate which he deserved, we must not tell. Readers young and old will far rather extract all these plums for themselves – it indeed one can use that simile of a pudding which is almost all plums. Among them we must not forget the illustrations by G. L. Stampa.

There is faint praise from R. L. Green (Tellers of Tales, Edward Ward, 1953, page 237), a former Editor of the Kipling Journal:

…concerning the slight but amusing stories in his late book … Unusual but amusing, and a most convincing fancy of how a dog might tell his story if suddenly endowed with human speech – but adding no extra glory to the author of Kim, of Stalky & Co., of the Just So Stories etc.

And Angus Wilson is not particularly enthusiastic either (p. 314.):

Kipling’s emptiness was in part filled by studying (and loving) the Aberdeen terriers he kept at Bateman’s. He attempted, alas, to write a whole book out of this – Thy Servant a Dog. It is a worthy attempt to speak through a dog’s sense of feel and smell and sight, but it is marred by the sentimentality with which Kipling covers his egoistic conviction, which is that the magnificence of dogs lies in their complete subservience to their masters.

For prose and verse on hunting, see “My Son’s Wife” (A Diversity of Creatures), “Little Foxes” (Actions and Reactions) “Verses on Games” “Fox-Hunting” and, later in this volume. “The Great Play Hunt”. For others – see under “Dogs” and “Horses” in Themes in Kipling’s Works on this site.

For life at Burwash with glimpses of Kipling at home, see The Kipling I Knew by Captain Edward Parsons (Edward Parsons (Books) Auckland, New Zealand, 1985.)

Although hunting with hounds was banned in Britain in 2005, ‘dogs’ can still be used to follow a scent but must not kill foxes.