[Page 3 line 7] Flat-in-Town in this context Town means London. Many people with a house in the country maintained a flat in London – see page 75 – unlike Kipling, who had a suite at Brown’s Hotel in Albermarle Street.

[Page 5 lines 5-9] There is Cookey…Odd-man the domestic and outside staff of a medium to smallish country-house of the period. The Nurse joins the household on page 18, an interesting comparison with equivalent establishments in India as described in Plain Tales from the Hills and “The Smith Administration” (From Sea to Sea, Vol. 2) and elsewhere. It appears that this is a house on the estate occupied by the owner of Boots whose name is not given but is a nephew of Proper Man and probably heir to the title.

[Page 5 line 10] Please’m – butcher the maid would probably say ‘Please, Mum,’ (short for ‘Madam’) ‘the butcher is here’. This was a happy era when the butcher’s boy called daily and would deliver a few chops in time to have them cooked for lunch. Mrs. Kipling paid the local household bills at Bateman’s every Tuesday, and others at the beginning of every month. (Dorothy Ponton, p. 29)

[Page 5 line 20] sing in this context a sustained howl on various notes.

[Page 7 line 19 onwards] beautiful Smell he is introduced to the scent of fox which he follows until it runs out.

[Page 7 line 22] ‘ware-sheep Alastair Wilson writes: Beware, sheep! Sheep worrying by dogs is a perennial problem for farmers, and all dogs living (or visiting) the countryside must be trained not to chase sheep. The warning of ’ware! was a frequent call in the hunting field; as in ‘ware wire! (“don’t try and jump that hedge, there’s barbed wire hidden in the top of it”); or ’ware wheat! or ’ware seeds! “don’t ride over this field, it’s got young crops in it”, or “it has been newly planted”.

[Page 10 line 8] thick Cookey … thin Cookey they have cooks of various sizes over the years, but the Cat takes the view that they are hers and she does not belong to them. Servants came and went in Britain of the twenties and thirties, as they did in Carrie Kipling’s household, and ‘the servant problem’ was much discussed by ladies of the upper middle-classes over the tea-cups.

Then drink, puppy drink, and let ev’ry puppy drink
That is old enough to lap and to swallow;
For he’ll grow into a hound, so we’ll pass the bottle round,
And merrily we’ll whoop and we’ll holloa.

[Page 12 line 5] at Walk hound puppies are boarded with local people to be reared until they are old enough to join the pack. See “Little Foxes” (Actions and Reactions, page 238)

[Page 13 line 9] sticky water Alastair Wilson writes: probably petrol, used as a solvent to get tar or something similar out of a dog’s coat. We wouldn’t think of it as being sticky, but it might be to a dog. Alternatively, it might be a mis-print for stinky water, though we doubt that, since Kipling would surely have noticed such a mis-print, given the number of re-prints this volume went through. But it seems quite possible. Kipling was keenly aware of the importance of smells to his dogs. In the notes on Teem’ – a Treasure Hunter (page 163, line 16), Kipling makes Teem call a motor-car a stink-cart.

[Page 15 line 1] Rat-sticks Alan Underwood writes: Not a game I know, but perhaps it is throwing sticks for the dogs to retrieve.

[Page 15 line 4] chasing pounds off the calves the farmer was fattening them for market – the exercise would make them lose weight. He might well have shot the dogs for worrying his cattle.

[Page 19 line 10 onwards] you are only dirty little dogs … An echo of the Expulsion of Adam and Eve from Eden told in Chapter 3 of Genesis,

[Page 19 line 22] Own Gods walking in garden another echo of Genesis 3,8: ‘And they heard the voice of the LORD GOD walking in the garden…’

[Page 21 line 22] Pensioned Hunt-Terrier Alan Underwood writes: the terrier was used to locate and/or bolt a fox that had gone to ground. The terrier-man and another helper would sometimes dig towards the fox if the land-owner or farmer wished it to be killed because it was taking poultry. In years gone by a richer hunt would have an additional hunt servant who would carry the terrier in a bag on a horse – now a cross=country vehicle is used.

[Page 22 line 11] Moore the huntsman – he would be wearing a white kennel-coat – similar to a warehouse-coat – which would have a smell to which the hounds were accustomed. Cattle have been known to attack their stockman if he is in his Sunday best which would not have the smell which they were used to.

[Page 22 line 12] m’Lord My Lord. Alastair Wilson writes: the tale is (loosely) based round the Bathursts, whom Kipling knew, having been a guest at Cirencester Park, where Lord Bathurst was Master of the local hunt, the Beaufort. The Earls Bathurst have been long-time Masters of the Beaufort Hounds, almost hereditarily. Had the Master of these particular Hounds not been a nobleman, Moore would have addressed him as ‘Master’.

[Page 22 line 15] swine-chopped he has a malformed mouth – the Kennel Club (founded in 1873 to promote the improvement of dogs) calls for jaws strong with a perfect, regular and complete scissor bite, i.e. upper teeth closely overlapping lower teeth and set square to the jaws. See page 31, line 16.

[Page 22 line 16] by Romeo and Regan unlikely – it was usual to give hounds names beginning with a different letter each year, so, like silver, the year of birth or assay can be identified. His parents would, therefore, have names beginning with earlier letters of the alphabet.

[Page 23 line 24] boot-house here the Odd-man or perhaps a boy would clean the boots and shoes of the household.

[Page 24 line 2] Kitchen Cat a cat will sometimes climb into a cradle, lie across the face, and smother the baby.

[Page 27 line 9] look-not-see with a far-away look in his eyes – he is wondering whether to have Ravager killed, or if his defects are not too much of a handicap.

[Page 27 line 27] featherin’ feathering, a quivering movement with the tail and body, while searching for the trail. [OED] Alan Underwood writes This is usually applied to hounds showing more interest at some stage when actually hunting but implies acting similarly to attract attention. The (10th) Duke of Beaufort’s Foxhunting says:

When hounds take a sudden and much more active interest they are said to be feathering. They move more quickly and their noses seem to be glued to the ground , their sterns moving from side to side. With any luck, immediately afterwards you may expect sweeps away on the line.
[David and Charles, 1980]

[Page 28 line 4] heredity he does not want to breed the deformity into later generations of his hounds, but it turns out to be not as bad as expected – see p. 31, line 16.

[Page 28 line 14] ate grass and sicked up dogs know that some grass will induce vomiting and so relieve the pain of overeating, etc.

[Page 28 line 17] Bell-Day Sunday, when the bells are rung for church.

[Page 30 line 14] Chop him in cover young hounds in the cubbing season were encouraged to seize their quarry before it broke cover so they might acquire a taste for foxes – and later trained to let it go in order to provide a good run.

[Page 30 line 26] stick at Bull’s nose the stockman had a stick with a hook on the end which fitted into the ring in the bull’s nose so that he could be led in safety.

[Page 31 line 19] Put him down to the Poultry Fund a not very serious suggestion that the damage to the bull could be paid for out of the fund that used to be maintained by the Hunt for compensating farmers for poultry killed by foxes.

[Page 31 line 20] cried dung-hill Falstaff is addressed as ‘Dunghill’ by Prince Hal in Act II of Kipling’s “The Marrèd Drives of Windsor”, and Pistol implies that Falstaff is a dunghill in Shakespeare’s “The Merry Wives of Windsor”, Act I, Scene 3. This is a metaphor from cockfighting: to cry dunghill is to run away, and thus to acknowledge the ancestry of a dunghill cock instead of a pure-bred game-cock. [See KJ 248/25].

[Page 32 line 9] frilly drawers the long hair on the back legs of Aberdeens can be seen in some of Stampa’s illustrations.

[Page 32 line 10] burrs in this context the seed-pods of various plants which are equipped with hooks or a sticky substance so they are carried away on the coats of animals etc.

[Page 33 line 11] cold-dead-rat the equivalent of the “cold shoulder”.

[Page 33 line 19] drat you a vulgar expression of disgust or disapproval, not often heard today

[Page 35 line 7] Pinks Boots’ name for riders wearing red coats; in most hunts, Hunt Staff, masters and subscribers who have been asked to wear the hunt button wear red coats. The term “pink” was used by the ignorant and journalists. The Duke of Beaufort wrote: Please not “pink” though “scarlet” is acceptable. 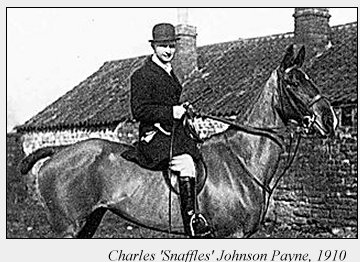 [Page 35 line 9] like rat-catcher Alastair Wilson writes: In the hunting field, ‘rat-catcher’ meant anyone not wearing a red coat. The correct attire would be bowler hat, tweed jacket, hunting stock, breeches and boots. Charles “Snaffles” Johnson Payne (1884–1967) was an English painter best known for his humorous work. The Anthony Woodd Gallery in Edinburgh has a splendid selection of his hunting prints.

[Page 35 line 22] washed off the child might also have had some of the blood of the fox smeared on his face – an initiation known as Blooding.