This story first appeared in The Phantom Rickshaw and other Eerie Tales (Volume Five of the Indian Railway Library, published by Wheelers of Allahabad in 1888) and collected in Wee Willie Winkie and Other Stories in 1895, and in numerous later editions of that collection.

The narrator, a journalist, encounters two ruffianly-looking adventurers, Daniel Dravot and Peachey Carnehan, who announce that they are off to Kafiristan in the mountains of Afghanistan to make themselves Kings. Some two years later, on a hot summer’s night, Carnehan creeps into his office, a broken man, crippled and in rags, and tells an amazing story. They had indeed made themselves Kings, persuading the local people that they were gods, mustering their army, asserting their power over the local villages, and planning to build a Nation. But Dravot had tried to take a wife; terrified, she had bitten him until he bled, and he was seen to be “Not a God nor a Devil, but only a man!” The people, led by the priests, had turned against them, dropped Dravot from a high bridge to his death, and crucified Carnehan with wood splinters. Carnehan is carrying Dravot’s head, and his golden crown, in his bag. He hobbles away and dies soon after. No sign of head or crown remains. 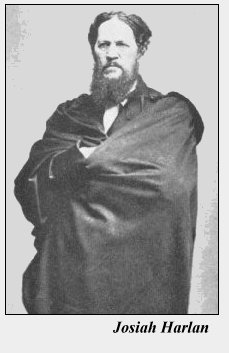 Josiah Harlan (1799-1871), ‘Prince of Ghor’, was an American adventurer who went to Afghanistan and the Punjab where he became involved in politics and military action, later winning the title of Prince of Ghor in perpetuity for himself and his descendants. [See Ben Macintyre, Josiah the Great, Harper Collins 2004, p. 310.]

See KJ 281/58 for a letter from Mr.R.F. Rosner telling how Harlan, who served as an Assistant Surgeon in the East India Company’s Army, was active from 1828 to 1841 as a soldier, spy and governor in the Punjab, Afghanistan and Central Asia. Harlan claimed to have obtained the right to rule a ‘kingdom’ in the Hindu Kush.

According to David Gilmour
(p. 37) Kipling’s story was inspired by the author’s meeting with an unidentified Freemason when he was working as a young journalist in India, which suggests that Harlan’s adventures or a version of them, had been absorbed into Masonic folklore on the North-West Frontier. Kipling would certainly have been familiar with Harlan’s history, just as he would have known of the even earlier exploits of George Thomas, the eighteenth-century Irish mercenary.

Omer Tarin writes of the region:

‘Kafiristan’ was never a clearly demarcated country or nation – rather, an approximate region or terrain sprawled out across the Hindu Kush. The part of it that fell under Afghan jurisdiction was indeed invaded and forcibly converted to Islam and renamed ‘Nuristan’ in 1895; the part under (indirect) British jurisdiction, attached to the former princely state of Chitral (now Chitral district of NWFP/Khyber-Pukhburkhwa in Pakistan) is still known as “Kalasha” or “Kalash Kafiristan”. It consists of a narrow strip containing three main valleys, Rembor, Birir and Mumboret and is still home to a sizeable number of pagan Kalash/Kalasha people, sometimes termed ‘Kafirs’ (‘infidels’).

The Kalash/Kalasha used to be divided into two major divisions: (a) the Siah-posh (black-clad) and (b) Sufaid-posh (white-clad), representing tribal rather than racial affiliations. The Siah-posh long remained dominant, and all the surviving Kalasha ‘Kafirs’ in Pakistan today are Siah-posh; according to the 2000-2001 census of Pakistan, some 8-9,000 still survive and follow their ‘old ways’, despite increasing ‘Islamization’ in Chitral following the entry of fundamentalist Taliban-like elements there in recent years.

There is a considerable amount of contemporary material, including several anthropological studies between the 1970s and 1990s. However the two great old ‘classics’ remain:

Other useful works include:

See also KJ 256/49 for a letter from Mr F.H. Brightman referring to George Macdonald Fraser’s novel Flashman and the Mountain of Light, concerning the first Sikh War of 1845-46.

Cornell (p.161), speaking of this tale, comments: “…the best of the stories Kipling wrote in India must conclude any study of his apprenticeship, not only because of its brilliance, but because in a sense it embodies and sums up Kipling’s attitude to India and the role of the British in the land they had conquered.” Cornell also draws our attention to Irony, Freemasonry, and Humane Ethics in Kipling’s “The Man who would be King” [ELH XXV (1958) pages 216–33] by Professor Pauf Fussell Jnr.
Birkenhead (p.100) regards this as one of Kipling’s three finest stories – see our notes on “The Strange Ride of Morrowbie Jukes” also in this volume.

In his otherwise well-balanced and quite generous Rudyard Kipling (Thames and Hudson, 1975, pp. 62 ff.) Kingsley Amis says of this story:

… the grossly overrated long tale “The Man who would be King” …….. The man …. would attain royal status among some tribe beyond the hills …. This silly prank ends in predictable and thoroughly deserved disaster. One of the aspirants is killed by the indignant natives , the other crawls back to Lahore or somewhere and survives just long enough to tell the tale to a newspaperman whom it is convenient to call Kipling. …… before setting off on their antic …. one of these buffoons long-windedly asks Kipling to take a message to the other…..This is a story with an unusually elaborate frame even for Kipling, who was much too fond of the device. The elaboration has fooled critics, who mistake it for complexity, which they are used to mistaking for profundity.

Edmund Wilson believes this story is “…surely a parable of what might happen to the English if they should forfeit their moral authority.” [Edmund Wilson “The Kipling that Nobody Read”, in Kipling’s Mind and Art ed. Andrew Rutherford, Oliver & Boyd, 1964.]
Stewart (pp. 56 ff) calls this: “His earliest masterpiece … leaves on a first reading simply the effect of a tour de force of the imagination, of a fantastic story rendered fantastically convincing … much of its power is owing to the deliberate artistry with which it is constructed.”
Shamsul Islam (p.81) comments that: “Kipling was conscious of the fact that the Empire was not eternal and that … the English would lose it the moment they neglected their moral duty…The moral of the story is that what can happen in Kafiristan may happen to Pax Britannica…”

Marie Roberts, in British Poets and Secret Societies, Croom Helm 1986 (p. 102 ff.), suggests that “The underground tentacles of British influence reaching out through the secret Masonic network contributed to the growth of the Empire. She goes on to discuss several items of Kipling’s prose and verse with a Masonic theme and then refers to this story (p. 110) as “a Masonic fable , which is also a parody of colonisation.”

Other works that touch on Masonic themes include the poem “Banquet Night”, “In the Interests of the Brethren”, “The Janeites”, “A Madonna of the Trenches”, and “A Friend of the Family”, (all in Debits and Credits) and the poem “The Mother-Lodge”. For Kipling’s progress in Freemasonry see Something of Myself pp. 52–53, Lycett pp. 128–9 etc, and Norman Page p.185.

The typescript of a dramatic version of this story by Frederick Kinsey Peile, revised by Kipling, was offered for sale in London in 1936. It consisted of 90 pages with about 300 alterations and three autograph letters, signed by Kipling and dating from 1910–1911, referring to the play [The sale has not yet been traced and any further information about it would be very welcome: Ed. ]

Norman Page also quotes in the ‘Filmography’ section of his book (p.193) what he describes as a “…successful version of Kipling’s short story. Directed by John Houston, it stars Sean Connery, Michael Cain and Christopher Plummer (as Kipling)”.

There are one or two unnecessary scenes by another hand, but on the whole, if not taken too seriously, it is quite an entertaining production.

There have been numerous references to this story in the Kipling Journal  In particular see 310/32 for an important essay by Dr. Colin D. Pearce on the similarity of the activities of the two adventurers with Machiavelli’s instructions for the government of a newly-acquired principality.