In 1881 the young Kipling wrote 26 lines of what he called ‘An argument for a projected poem’, which was to be called “The Seven Nights of Creation”. He sent this to his mother in Lahore in manuscript, and it was one of the twenty-three poems she arranged for publication, in an edition of fifty or so, under the title Schoolboy Lyrics. It is listed in ORG as No. 30.

Some time after he had arrived in Lahore in October 1882 to work as a journalist, he wrote the full poem, in 144 lines, published in the Calcutta Review of April 1886. It was not subsequently collected. However lines 34 to 58 (“O Hassan! Saving Allah …” to “…troubled by the breeze”) are included in Lockwood Kipling’s Beast and Man in India (1892) as a heading to chapter 18, with some alterations.

The ‘Argument’ is collected in:

The projected poem was to be based on an Islamic legend: As Kipling writes in a headnote:

The Devil each night of the seven days of Creation
works in emulation of the Creator and produces
baneful things—fogs, poisonous plants, venomous
creatures, etc.—and at last tries to make a man in
imitation of Adam. He fails, recognises his failure,
and is obliged to own that his power cannot rival that
of the Creator, and that evil is less powerful than good.

After his unhappy years at Southsea, Kipling was sent to United Services College at Westward Ho! in Devon at the age of twelve, in 1878. Because of his poor eyesight he was no good at rugby or cricket, and the Head, Cormell Price, who was a friend of his father, gave him the freedom of his library:

He gave Beetle tlie run of his brown-bound, tobacco-scented library; prohibiting nothing, recommending nothing. There Beetle found a fat armchair, a silver inkstand, and unlimited pens and paper. There were scores and scores of ancient dramatists ; there were Hakluyt, his voyages ; French translations of Muscovite authors called Pushkin and Lermontoff ; little tales of a heady and bewildering nature, interspersed with unusual songs—Peacock was that writer’s name ; there was Borrow’s Lavengro ; an odd theme, purporting to be a translation of something called a
‘Rubaiyat,’ which the Head said was a poem not yet come to its own ; there were hundreds of volumes of verse—Crashaw ; Dryden ; Alexander Smith ; L.E.L. ; Lydia Sigourney ; Fletcher and a purple island ; Donne ; Marlowe’s Faust; and—this made M’Turk (to whom Beetle conveyed it) sheer drunk for three days—Ossian ; The Earthly Paradise ; Atalanta in Calydon ; and Rossetti—to name only a few. (Stalky & Co. pp. 217-8)

Soon the young Kipling wrote himself, experimenting with styles and language and themes, borrowing from many other writers, expressing his feelings about the world around him, finding his own voice, determined that he would become a published poet. Even as a schoolboy he realised the competitive and vicious literary world he was hoping to conquer.

There is no mention here of a possible source for the legend of Eblis seeking to imitate Allah in the creation of Man, and failing utterly, though there must have been one, somewhere in the Head’s library, or elsewhere. It does, however, reflect an abiding concern of the young Kipling, dedicated to making himself a creative writer like the masters of poetry he read so avidly, anxious for recognition, and fearing failure.

Ann Weygandt (p. 110) sees this poem as owing something to Tennyson’s blank verse, but also to Browning’s Men and Women.

I would read this poem as the youthful Kipling’s gloss on Browning’s Caliban upon Setebos: Natural Theology in the Island, in which Shakespeare’s half-human savage Caliban (from The Tempest) meditates on the evil Setebos who created the world, in envy of the ‘Quiet’, Caliban’s word for the transcendent unknowable Divine. The ugliness and pathos and insufficiency of Kipling’s ape sound very like Browning’s Caliban, whose tyranny over his ‘blinded beast’ parodies Prospero’s tyranny over himself, which together inspire Caliban’s idea of his bullying god Setebos. Browning’s epigraph ‘Thou thought’st I was such another as thyself,’ implies that Caliban has made his god Setebos in his own image when he decides that the Creator must be evil, going by his own experience of a life dominated by cruelty – mostly what he suffers from Prospero, but sometimes inflicted by him on weaker creatures.

Of course, he knows nothing of Christian revelation. Browning was (I think) a Christian and the joke is supposed to be on Caliban, implying the darkness of humans left to their own ‘natural theology’; but of course the poem’s ironies can cut more than one way. For all that pious introduction, Kipling’s poem argues that the Devil had his hand in the creation of the world, apes included.

Kipling knew Browning’s Caliban well, making Beetle quote it in ‘Slaves of the Lamp I’ (Stalky & Co. p. 38), when looking up chance quotations in Men and Women to give him an idea for getting revenge on King: ‘Then, irrelevantly: ‘Setebos, Setebos, and Setebos ! Thinketh, He liveth i’the cold of the moon’ Stalky & Co. (p. 52), from Caliban meditating on where his god lives. I think the mention of Caliban, in a scene that emphasises how Browning’s poetry ‘lived and ate with him [Beetle] as the be-dropped pages showed’ (p. 46) is very telling about how important it was to him.

I would also want to link this poem with the much later Puck story ‘The Knights of the Joyous Venture’ (Puck of Pook’s Hill) in which Sir Richard thinks gorillas are ‘Devils’; the gorillas are demonised because they’re African apes, guardians of the Treasure that Richard and Hugh will bring back to England. I see this early poem as evidence of Kipling even in his teens associating apes with the Devil. [J.M.]

For five years, from November 1882, the greater part of his time in India, Kipling was assistant editor of the Civil and Military Gazette in Lahore, that great Muslim city, now the principal city of Pakistan. Andrew Lycett, commenting on Kipling’s interest in Freemasonry, writes (p. 529):

He himself was not religious in a formal sense … But he was fascinated by the way religions sought to explain the more complicated issues of human existence. Until now, India had seemed a spiritual bazaar, with salesmen, from the Sufis of Lahore to the Theosophists of Simla, pushing their wares. To ground himself he needed a philosophy with an intellectually satisfying explanation of the world and its mysteries. Freemasonry provided a structure which allowed him to dart among different faiths and to address such esoteric issues as the Talmudic theory of Creation, as seen from the point of view of a Moslem potter (the subject matter of “The Seven Nights of Creation”.

During his time in Lahore, exploring the alleyways in search of stories, and wandering through hot nights until the muezzins woke the sleeping city, he discovered a strong affinity for Islam.
There are references to Islam in many of the tales he wrote about India. Many years later, visiting Cairo in 1913, he was reminded of Lahore, and wrote:

Some men are Mohammedan by birth, some by training, some by faith ; but I have never met an Englishman yet who hated Islam and its people, as I have met Englishmen who hated greatly
some other faiths.
[“A Serpent of Old Nile” in “Egypt of the Magicians”, in Letters of Travel (1892-1912) published in 1920]

(of the full poem)

[line 1] Yusuf male Arabic name , meaning “God increases in piety, power and influence” in Hebrew. The Arabic equivalent of both the Hebrew name Youssef and the English name Joseph which Kipling did not use although some of his early work is signed Yussuf. 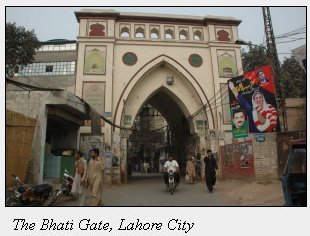 [line 2] Bhatti Gate one of the thirteen gates of Lahore.

[line 3] scorpion an eight-legged predatory arachnid of the order Scorpiones recognised by its lobster-like claws and curved tail with a venomous sting. They vary in length from 9 mm to 23 cm.

[line 19] Eblis from the Pit the devil in hell

[line 33] Hassan Hasan ibn Ali (624-679), was the eldest son of Ali and Fatima, the daughter of the Prophet Mohammed. The grandson of the Prophet, he is revered by Shia Muslims as the 2nd Imam, and by Sunni Mulims as the 5th Caliph. In “On the City Wall” (SoldiersThree p. 343) Kipling describes the crowds in the streets duriung the Mohurrum festival shouting Ya Hassan! Ya Hssan!.

[line 51] sword-wide Bridge Al Sirat, the bridge no wider than the edge of a sword, over which those seeking to enter the Islamic heaven must pass.

[line 59] chuppar thatch made from grass or straw. 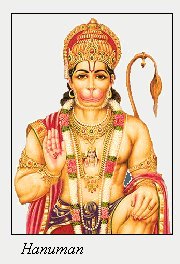 [line 66] Hanuman a Hindu god in the form of a monkey. See “The Bridge-Builders” (The Day’s Work).

[line 81] Djinns Demons in Arabic and Islamic mythology. Various Djinns appear in Kipling’s works, though here they are mainly benevolent. See “The Butterfly that Stamped” and “How the Camel got his Hump” in Just So Stories..

[line 87] pellets from his wheel small lumps of clay from his potter’s wheel.

[line 89] al Bari The Creator, one of the ninety-nine Names of God.