This story was first published in the Strand Magazine of March 1906, and the Ladies’ Home Journal for the same month. It was collected in Puck of Pook’s Hill in 1906 and in numerous subsequent editions of that collection. It was accompanied by the poems “Harp Song of the Dane Women” and “Thorkild’s Song” .

It is over thirty years since “Young Men at the Manor”. Sir Richard had married Lady Aeluva, Hugh’s sister, and their son is now a young man. Aeluva has died, and Richard and Hugh decide to go on a journey to forget their sadness. Out in the Channel they fall overboard into a Danish long-ship, going adventuring down the coast of Africa. They make a long perilous voyage, make good friends with Witta, the crafty captain of the Danes, and after a desperate fight, which leaves Hugh crippled, they bring back a great treasure of gold. On the way up Channel Witta leaves them on the Pevensey marshes, with a goodly share of the treasure. De Aquila is now Lord of Pevensey, and they hide the gold in his castle.

[Page 69, line 6] Golden Hind The ship in which Sir Francis Drake became the first Englishman to circumnavigate the globe (1577-80).

[Page 69, line 7] howked variant of hooked; moved with a sudden twist or jerk.

[Page 71, line 30] The Sagas of the Seas Often with a historical core the sagas were heroic tales of the Nordic peoples, chronicling real events and the deeds of real men and women, and often handed down orally from generation to generation before being written down. The great age of the sagas was the 12th and 13th centuries.

[Page 73, line 11] Honour of the Eagle ‘The term Honour is usually applied to a lordship that has other lordships under it.’ (Sussex Archaeological Collection xiv. 41.) 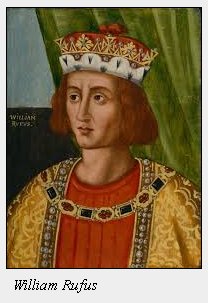 [Page 73, line 16] Red William our King On the death of William the Conqueror in 1054 he was succeeded not by his eldest son, Robert, Duke of Normandy, but his second son, William Rufus, so called because of his red hair. After Red William’s death in 1100, Henry the third son of the Conqueror, took the English throne as Henry I.

[Page 73, line 21] if Red William be dead I may have to fight for my lands In those times all the lands of England belonged to the crown. When the King died the whole structure of feudal land-holding was suspended until a new King had been crowned.

[Page 73, line 32] Artois province in the extreme north-east of France; at this time it belonged to the territory of the Counts of Flanders.

[Page 74, line 3] Mantes town in Normandy. William the Conqueror was fatally injured at the end of its siege in 1087.

[Page 74, line 3] Duke of Burgundy after the defeat of Christian forces by Almoravid Muslims from Africa at Sagrajos in 1086, Duke Eudes of Burgundy and other leaders raised a huge army in 1087 to campaign against the Moors in Spain.

[Page 77, line 22] South Saxon This would have been the dialect of Anglo-Saxon spoken in much of Southern England in those times.

[Page 83, line 17] Leech-Book of Bald Weygandt (Reading, 10) notes that a book of cures associated with one Bald in what seems to be a tenth-century manuscript is reprinted in Revd O. Cockayne’s Leechdoms, Wortcunning and Starcraft of Early England (1865).

[Page 83, line 21] a mountain whose top was covered with snow `probably Tenerife’ (ORG).

[Page 86, line 23] a hut in a clearing among fields of pumpkins Jim Goodwin writes: Pumpkins are a kind of squash, and the squashes generally
are new-world plants (right?). So this jarred. However, etymologically, there seems to be some kind of justification.

A superficial googling yields:‘1640s, alteration of pompone,
pumpion “melon, pumpkin” (1540s), from Middle French pompon, from Latin peponem (nominative pepo)’ So a Norman of the period might have used “pompon” and meant “melon”. I wonder what Kipling was thinking, and what he expected
his readers to understand by “pumpkin”. Would Englishmen
of Kipling’s time even have used the word for European melons ? [J.G.]

But melons had been grown in Africa for thousands of years, so perhaps Kipling was not so wide of the mark ? 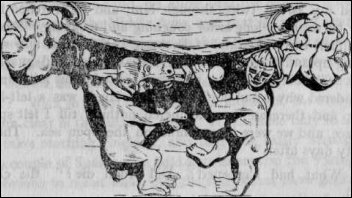 [Page 87, line 17] a great Devil J. D. Ferguson in “The Germ of “The Joyous Venture” (KJ005 (April 1928), 12-15) proposes the story may have been suggested by a misericord carving (left) in Chichester Cathedral, of a man fighting with dog-headed devils.
Jan Montefiore writes: Sir Richard thinks gorillas are ‘Devils’.

Dan puts him right that they’re really apes, but the story does not question that they’re devilish, nor object to him and Hugh and Thorkild slaughtering them. This has always slightly puzzled me, because Kipling is almost always sympathetic to animals and very much on their side against human hunters. (Think of “The White Seal”).

I suspect that the answer may have something to do with imperialist racism – “The Joyous Venture” is all about explorers if not quite conquistadors, and the gorillas are demonised because they’re African apes, guardians of the Treasure that Richard and Hugh will bring back to England. It is interesting that in an early poem “The Seven Nights of Creation”, planned in 1881 while Kipling was still a teenage schoolboy, he associated apes with the Devil. [J.M.]

[Page 89, line 17] crutched himself Using his arms to support himself, like crutches.

[Page 93, line 30] a stout keep over Dallington The keep was the heart of a castle, usually a strong tower, which could be defended even if invaders got across the moat and the outer wall. Dallington was, and is, a village some three miles south of Bateman’s.