First published in Liberty on 26 April 1930 with five illustrations in black and red ink, drawn by Wladyslaw Teodor Benda
(1873-1948) Polish-American painter and illustrator, and in

for June 1930. Collected in Limits and Renewals (1932) where it is accompanied by “Akbar’s Bridge”. See also the verse “The King’s Pilgrimage”.

This is another account of British activities seen through Indian eyes similar to “A Letter from Golam Singh” (From Sea to Sea, Volume II) and “One View of the Question” (Many Inventions).
Andrew Lycett (page 567) encapsulates the story neatly:

‘an intriguing tale, based on an incident Rudyard had himself witnessed, of a former Indian soldier, a Moslem, who had seen King George V on a visit to war graves in France telling a sick general to put on his overcoat (or “British warm”) The Moslem believed that as a result of this act of kindness the King would survive the illness that nearly killed him in 1929. In “Akbar’s Bridge” Rudyard provided a secular antidote to the hint of sympathetic Islamic magic. While affirming the nobility of “kingly justice”, the verses reiterated an old theme: a bridge across a river is more use to the poor than another mosque.’

Kipling and the King 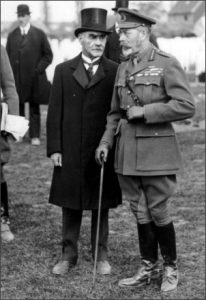 Born in 1865, the same year as Kipling, George V ascended the British throne on the death of his father, King Edward VII, in 1910. He died on January 20, 1936 two days after Kipling. They knew each other personally, Rudyard had stayed at Balmoral, and dined at Buckingham Palace. [Kenneth Rose, King George V, Phoenix Press 1983, page 283]. The King was taken ill on 21 November, 1928 and later a chest infection was diagnosed. He eventually recovered after convalescence the next year at Bognor in Sussex.
[Rose p. 355]

Kipling wrote the speech for the King’s first Christmas broadcast in 1932 which was a great success, [Rose, page 393] [The present Editor – a child at the time – heard it and was most impressed.] It set the tone for all subsequent broadcasts by the King, several of which, according to Harry Ricketts (page 371) were also written by Kipling.

This is the text that appeared in The Times of Tuesday, 27 December 1932:

Through one of the marvels of modern science, I am enabled, this Christmas Day, to speak to all my peoples throughout the Empire. I take it as a good omen that wireless should have reached its present perfection at a time when the Empire has been linked in closer union, for it offers us immense possibilities to make that union closer still.
It may be that our future will lay upon us more than one stern test. Our past will have taught us how to meet it unshaken. For the present, the work to which we are all equally bound is to arrive at a reasoned tranquillity within our borders, to regain prosperity without self-seeking and to carry with us those whom the burden of past years has disheartened or overborne. My life’s aim has been to serve as I might towards those ends. Your loyalty, your confidence in me, has been my abundant reward…

I speak now from my home and my heart to you all; to men and women so cut off by the snows, the desert or the sea that only voices out of the air can reach them; to those cut off from fuller life by blindness, sickness or infirmity, and to those who are celebrating this day with their children and their grandchildren – to all, to each, I wish a happy Christmas..

Kipling and the War Graves

Kipling, whose only son had been killed in 1915 at the age of eighteen, was a member of the War Graves Commission, and wrote a pamphlet, The Graves of the Fallen. (There is a photocopy in the Kipling Library, and the text is reprinted in ORG, Volume 5 at p 2326. ) See also the notes by Lisa Lewis on “The Gardener” (Debits and Credits) in this Guide; also Souvenirs of France page 41, Rose, p. 49, and Michael Smith, Kipling’s Sussex (Brownleaf, 2008) p. 128. Also Michael Aidin in KJ 324/12.
Charles Carrington (page 457) reports that:

‘…Kipling and his wife, touring the battlefields in May 1922, were instructed to meet the King near Ypres on the 11th. So Kipling waited in the lee of a wall – it was bitterly cold – for the arrival of the King with Field-Marshal Haig, an incident that suggested to him the charming little tale which he wrote some years later.’

Part of the text of the King’s speech at Terlincthun British Cemetery in France, which is generally believed to have been largely written by Kipling, is included in the article by Michael Aidin in KJ 324/12; there is also a useful bibliography. See also Michael Aidin’s address at the Kent Conference in September 2007, and Charles Carrington (p. 457). See also The Immortal Heritage: An Account of the Work and Policy of the Imperial War Graves Commission during Twenty Years, 1917-1937, by Fabian Ware (Cambridge University Press, 1937).

[Terlincthun British Cemetery, Boulogne sur Mer, is on the northern outskirts of Boulogne. From Calais follow the A16 to Boulogne, leave at jnction 3 and follow the D96E for Wimereux Sud. Continue for approximately 1 kilometre; the Cemetery is on the left hand side of the road with the entrance in St Martin’s Road, on the left immediately after the cemetery. The Column to which the King referred commemorates Napoleon’s Grand Armée which had a camp nearby. There is a plan and photographs in the Cemetery]
Andrew Lycett (page 509.) reports Kipling working on an important speech for King George V to deliver when visiting war graves in France and Belgium in May. The King’s Address is reported in The Times of 15 May, 1922:

For the past few days I have been on a solemn pilgrimage in honour of a people who died for all free men.

At the close of that pilgrimage, on which I followed ways already marked by many footsteps of love and pride and grief, I should like to send a message to all who have lost those dear to them in the Great War and in this the Queen joins me in the midst of these surroundings so wonderfully typical of that single-hearted assembly of nations and of races which form our Empire. For here, in their last quarters, lie sons of every portion of that Empire, across, as it were, the threshold of that Mother Island which they guarded that freedom might be saved in the uttermost ends of the earth.

For this, a generation of our manhood offered itself without question. And almost without the need of a summons. Those proofs of virtue, which we honour here to-day, are to be found throughout the world and its waters since we can truly say that the whole circuit of the earth is girdled with the graves of our dead. Beyond the stately cemeteries of France, across Italy, through Eastern Europe, passing over the holy Mount of Olives itself to the farthest shores of the Indian and Pacific Oceans, from Zeebrugge to Coronel, from Dunkirk to the hidden wildernesses of East Africa.

But in this fair land of France which sustained the utmost fury of the long strife, our brothers are numbered, alas ! by hundreds of thousands. They lie in the keeping of a tried and generous friend, a resolute and chivalrous comrade in arms, who, with ready and quick sympathy ,has set aside for ever the soil in which they sleep, so that we ourselves and our descendants may for all time reverently tend and preserve their resting-places. And here at Terlinethun, the shadow of his monument almost falling across their graves, the greatest of French soldiers – of all soldiers – stands guard over them. And this is just, for side by side with the descendants of his incomparable armies, they defended his land in defending their own.

Never before in history have a people thus dedicated and maintained individual memorials to their fallen, and in the course of my pilgrimage, I have many times asked myself whether there can be more potent advocates of peace upon earth through the years to come than this massed multitude of silent witnesses to the desolation of war.
And I feel that, so long as we have faith in God’s purposes, we cannot but believe that the existence of these visible memorials will eventually, serve to draw all peoples together in sanity and self-control even as it has already set the relations between our Empire and our Allies on the deep-rooted bases of a common heroism and a common agony.

Standing beneath this Cross of Sacrifice, facing the great Stone of Remembrance and compassed by these sternly simple headstones, we remember, and must charge our children to remember, hat as our dead were equal in sacrifice, so they are equal in honour, for the greatest and the least of them have proved that sacrifice and honour are no vain things, but truths by which the world lives.

Many of the cemeteries I have visited in the remoter and still desolate districts of this sorely stricken land, where it has not yet been possible to replace the wooden crosses by headstones, have been made into beautiful gardens which have been lovingly cared for by comrades of the war. I rejoice I was fortunate enough to see those in the spring, when the returning pulse of the year tells of unbroken life that goes forward in the face of apparent loss and wreckage: and I fervently pray that, both as nations and individuals, we may so order our lives after the ideals for which our brethren died that we may be able to meet their gallant souls once more, humbly but unashamed.

See Courage Remembered, the story behind the construction and maintenance of the Commonwealth’s Military Cemeteries and Memorials (H.M.S.O. 1989, p. 52). Charles Carrington, who served on the Western Front throughout the War (p. 442), and Harry Ricketts (p. 346).

‘… the stars whose influence on human lives was a commonplace of the India he knew, as he showed in Kim and much later in “The Debt”, and had been a commonplace in England, three hundred or so years before.

[See “A Doctor of Medicine” (Rewards and Fairies)]

J M S Tompkins also regards this story and “In the Presence” (A Diversity of Creatures) as illustrating a standard of honour and a spontaneous courtesy that all races recognise. (page 235)
Philip Mason (page 30) notes that this was a return to Kipling’s own childhood in India, as described in Something of Myself and reflected in “Baa Baa, Black Sheep”, “Wee Willie Winkie”, “His Majesty the King” (all in the volume Wee Willie Winkie), and other stories.