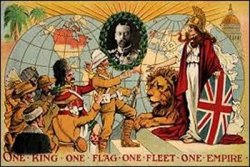 The connection between Kipling’s writing and empire is not a new subject. The Nobel Prize committee, awarding the prize in 1907, commented that Kipling had, ‘undoubtedly done more than any other writer of pure literature to draw tighter the bonds of union between England and her colonies’ (quoted in Kim ed. Sullivan, p.292).

Renewed interest in the representation of empire in Kipling’s work can be traced to Edward Said’s introduction to Kim (1987) which appeared in a slightly different form in Culture and Imperialism (1993). Said’s arguments focussed on Kipling’s use of stereotypes as well as the apparent absence of resistance to British rule, which is historically inaccurate. Many critics built on Said’s approach, including Patrick Williams (1989) and Zohreh Sullivan (1993 and 2002). More recently, there have been criticisms of Said’s approach, for instance in Harish Trivedi, ‘Arguing with the Himalayas’ (2010).

Bart Moore-Gilbert took criticism of Kipling’s fiction in a new direction by drawing on the theories of Homi Bhabha to examine hybridity in Kipling’s work (1996). Later he examined postcolonial novels which ‘wrote back’ to Kim, including Timeri Murari’s Imperial Agent (1987) and Jamyang Norbu’s The Mandela of Sherlock Holmes (1999).

Much post-colonial criticism has focussed on India and Kim , but Kipling’s engagement with empire is much wider, both in terms of genre and geography. Responses to empire are found in his short stories for adults and children, as well as in his verse and journalism. They encompass South Africa as well as India, while Kaori Nagai has studied the relationship between India and Ireland (2007) in Kipling’s works.

Since the mid-2000s, there has been an increased interest in Kipling’s artistry. Many scholars work from a position which accepts the damage done by colonialism and examine in detail the literary techniques Kipling invented and used. For an accessible introduction to Kipling, including his relationship with empire, Radio 4’s ‘In Our Time’ presented by Melvyn Bragg (2014) is a good place to start, while Montefiore (2007) provides a more detailed overview of critical debate about the multi-faceted subject of Kipling and empire.

Allen, Charles, Kipling Sahib: India and the Making of Rudyard Kipling (London: Abacus, 2007). (A biography of Kipling in this key period of his life)

Chemmachery, Jaine, ‘Lies and Self-Censorship in Kipling’s “Indian” Stories’, Kipling Journal 353, March 2014 (On ‘Thrown Away’ and ‘Beyond the Pale’)

Plotz, Judith, ‘How the “White Man’s Burden” Lost Its Scare Quotes’ in Rooney and Nagai (eds.) Kipling and Beyond (London: Macmillan, 2010).

Trivedi, Harish, ‘Kipling’s “vernacular”: what he knew of it and what he made of it’, Montefiore (ed.) In Time’s Eye: Essays on Rudyard Kipling (Manchester University Press, 2013)

NB: The editions of Kim by Sullivan (2002) and by Krebs & Lootens (2010) can be bought online via abebooks. Many students will have access to the Cambridge Companion to Kipling on-line through their university library.