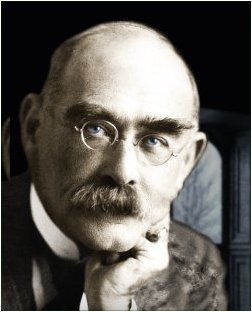 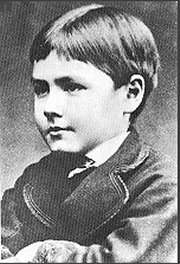 RUDYARD KIPLING was born in Bombay on December 30th 1865, son of John Lockwood Kipling, an artist and teacher of architectural sculpture, and his wife Alice. His mother was one of the talented and beautiful Macdonald sisters, four of whom married remarkable men, Sir Edward Burne-Jones, Sir Edward Poynter, Alfred Baldwin, and John Lockwood Kipling himself.

Young Rudyard’s earliest years in Bombay were blissfully happy, in an India full of exotic sights and sounds. But at the age of five he was sent back to England with his sister to stay with a foster family in Southsea, where he was desperately unhappy. The experience would colour some of his later writing. 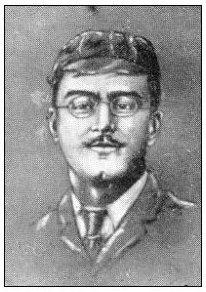 When he was twelve he went to the United Services College at Westward Ho! near Bideford, where the Headmaster, Cormell Price, a friend of his father and uncles, fostered his literary ability.

Stalky & Co., based on those schooldays, has been much relished by generations of schoolboys. Despite poor eyesight which handicapped him on the games field, he began to blossom.

In 1882, aged sixteen, he returned to Lahore, where his parents now lived, to work on the Civil and Military Gazette , and later on its sister paper the Pioneer in Allahabad.

In his limited spare time he wrote many remarkable poems and stories which were published alongside his reporting. When these were collected and published as books, they formed the basis of his early fame. 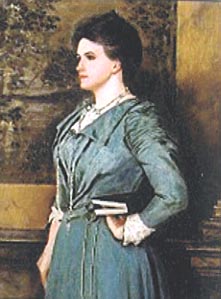 Returning to England in 1889, Kipling won instant success with Barrack-Room Ballads which were followed by some more brilliant short stories. After the death of an American friend and literary collaborator, Wolcott Balestier, he married Wolcott’s sister Carrie in 1892.

After a world trip, he returned with Carrie to her family home in Brattleboro, Vermont, USA, with the aim of settling down there. It was in Brattleboro, deep in New England, that he wrote Captains Courageous and The Jungle Books , and where their first two children, Josephine and Elsie, were born.

A quarrel with Rudyard’s brother-in-law drove the Kiplings back to England in 1896, and the following year they moved to Rottingdean in Sussex, the county which he adopted as his own. Their son John was born in North End House, the holiday home of Rudyard’s aunt, Georgiana Burne-Jones, and soon they moved into The Elms.

Life was content and fulfilling until, tragically, Josephine died while the family were on a visit to the United States in early 1899.

By now Kipling had come to be regarded as the People’s Laureate and the poet of Empire, and he produced some of his most memorable poems and stories in Rottingdean, including Kim, Stalky & Co., and Just So Stories.

At the Museum of the Rottingdean Preservation Society, at The Grange in Rottingdean, there is a now a Kipling Room, with a reconstruction of his study in The Elms, and exhibits devoted to his work. The Grange is open daily, and there is no admission charge. 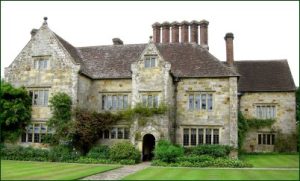 Life could never be the same again after Josephine’s death, and in 1902 he sought the seclusion of a lovely seventeenth century iron-master’s house house in the Weald of Sussex, near Burwash, called Bateman’s  where he spent his remaining years.

Puck of Pook’s Hill and Rewards and Fairies , which included the poem “If-“, and other well-known volumes of stories, were written there, and express Kipling’s deep sense of the ancient continuity of place and people in the English countryside.

There is a wealth of information about Burwash here.

Bateman’s is now in the care of the National Trust and is visited by thousands of people every year. 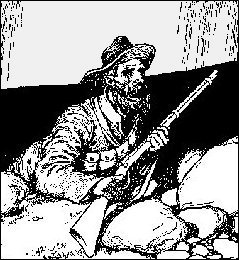 When the Boer War broke out in 1899, Kipling’s poem, “The Absent-Minded Beggar”  raised vast sums of money for the benefit of British soldiers. (Alfred Harmsworth, who owned the paper, and who had asked Kipling to support the fund, introduced him to the joys and frustrations of the pioneer motorist.)

Kipling visited South Africa during the war, visiting hospitals and hospital trains, and writing tales and poems about the conflict. He was appalled by the lack of preparedness and professionalism of the  British army. He was a friend of of Lord Milner, Cecil Rhodes, and of Dr Jameson, leader of the Jameson Raid, on whose qualities the poem “If–“ is said to have been based. He knew Lord Roberts, the Commander-in-Chief, from Indian days, and wrote at Roberts’s request for the Army’s newspaper in Bloemfontein, rediscovering the familiar routines of journalism. Thereafter he spent many winters after in a house near Capetown, at the invitation of Rhodes. (See our notes on “A Burgher of the Free State”. 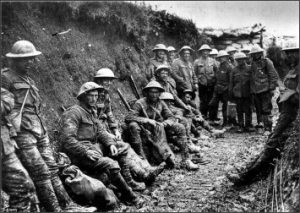 Kipling foresaw the First World War, and tried to alert the nation to the need to be prepared for it. When it came he denounced in vivid poems and stories the aggressive brutality of the German assault on Belgium and France. He reported on the sailors guarding the shore of Britain, and on the soldiers in training for action in France The loss of his son John in his first battle  at the age if 18 was a shattering blow. He did all he could to persuade Americans that their country should come into the war on the side of the British and French, as they did in1917.When  peace came in 1918 he called for sever retribution against Germany. 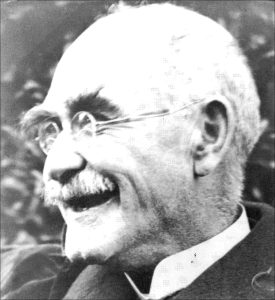 After the war he continued to write, and some of the post-war stories (for instance in Debits and Credits) are counted among his finest. He was also much involved in the work of the Imperial War Graves Commission, and King George V became a personal friend. The Kiplings travelled a great deal, and at the outset of one of their journeys, in January 1936, Rudyard died, just three days before his King. He had declined most of the many honours which had been offered him, including a knighthood, the Poet Laureateship, and the Order of Merit, although in 1907 he had accepted the Nobel Prize for Literature.

Rudyard Kipling’s reputation grew from phenomenal early critical success to international celebrity, then faded for a time as his conservative views were held by some to be old-fashioned. The balance has been somewhat restored, and many readers in the 21st century continue to appreciate his mastery of expression in poetry and prose, and the sheer range of his work. His role as the bard of empire remains an issue of debate. (see our pages on  “Kipling and Empire”.)”

His memoir Something of Myself was written in 1935, the last year of his life and published posthumously.

Over the years a number of writers have  written accounts of Kipling’s life and work, as can be seen from the Biography section of our booklist.    For an excellent critical assessment of the biographies, written in 2008, see the article by Lisa Lewis on “Kipling’s Biographers”.