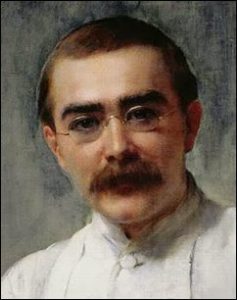 We offer a meeting place for people around the world who enjoy Kipling’s writings, in Europe, in America, in India and beyond, at home in an armchair or in reading groups. He was one of the world’s great story-tellers, vivid, magical, witty and memorable. If you know little of his writings, you have a treat in store.

We hold five meetings a year and readings from his poems and tales, streamed world-wide on Zoom. We have a quarterly Journal and a Library for members. and researchers. We encourage children to read him, and write stories for themselves. We make great use of the Kipling List on the Mailbase email discussion group.

In March/April this year we have hosted a world-wide writing prize.

We offer a friendly welcome to new members, from anywhere, of any age. You can join us from here

For students of any age the cost is £10 a year.

Why read Kipling in the 21st century ?

Some answers from our members

Ray Beck; Carton printer for many years, plays the drum in a band and the mandolin, sets Kipling poems to music, read “The Mark of the Beast” long ago and has never tired of Kipling since.

‘He describes in vivid detail the world as it was a hundred to a hundred and fifty years ago, that is now lost to us forever. His characters, whether of the highest rank in the land, or farm labourers, are believable and realistic, and will almost become actual people in your imagination. His tales encompass humour, history, the tragic and the supernatural and much, much more. His storylines are often based on fact and graphically depict the fascinating times in which he lived.’

Sarah LeFanu: writer, biographer, broadcaster, teacher. Has read Kipling for many years, recently published “Something of Themselves” about Kipling, Mary Kingsley and Conan Doyle in South Africa during the Boer War.

‘He writes of loss and grief, not in their generality but in heart-stopping particularity; the way the young characters in his stories – not just Mowgli but also Kim and Stalky, and Taffy of the Just So Stories – inhabit that tender place that once existed in all of us between innocence and experience … his verse exults in intricate patterns of sound and rhyme and metre, so that, as Mary Kingsley put it, his words ‘sing’.’

Alastair Wilson: retired naval officer and naval historian, given a set of Kipling for his first birthday, read the Jungle Books, Puck Stories, Stalky & Co. and the rest, moved to Sussex at age twelve a few miles from the old Kipling house, took his collection everywhere he went, Editor of Kipling diaries and of many notes in our New Readers’ Guide.

‘Because he is such a good story-teller, whose tales are timeless. He illustrates and illuminates so believably the people, the times, and the circumstances he is writing about.’

‘For me, Kipling is still the best source for quotable quotes. He expresses truths, fundamental or familiar, with such skill that you find yourself nodding in approval – as you commit the words to memory. Perhaps I should sign this ‘Tomlinson’.

Christopher Morrison: retired naval officer, trainer, sailor, enthused by Kipling’s verse at age ten, loved the poems ever since and likes to read them aloud.

‘His poetry has an inexorable rhythm which leads the reader perfectly through the many changes of pace and sentiment which Kipling packs into the words, and then rings out in the heart of the reader … His journalist’s instinct for the truth and ‘the way things are’, and his innate compassion and respect for the underdog …. And deeper still he puts into words those aspirations, fears and dreams that we all have but can’t perhaps recognise or articulate.’ 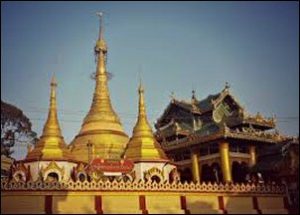 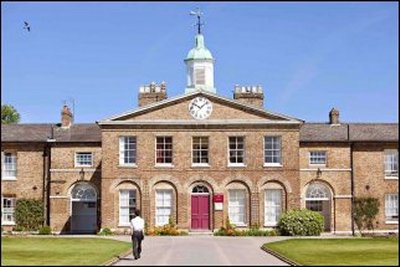 We are a world-wide community of Kipling’s readers, with on line access to what people are saying today about him and his writings, and members on every continent.

Our library at Haileybury College (right) houses a treasure-trove for scholars, writers, programme-makers, and interested readers. There are many editions of Kipling’s works both rare and familiar, criticism, biographies, translations, photographs, cuttings, and printed ephemera.

At quarterly meetings in London we have speakers from many different countries. We stream these talks world-wide to our members on Zoom. Recent subjects have included “The Wish House and the Working Class” by Mark Paffard, “Kipling at the Sorbonne” by Rosamond Parsons, and “Kipling, Kingsley, Conan Doyle and the Anglo-Boer War” by Sarah LeFanu, author of the recently published book, Something of Themselves.

These talks are also published in the Kipling Journal for all members. The full searchable archive of Journals back to 1927 is available to Members on this web-site. 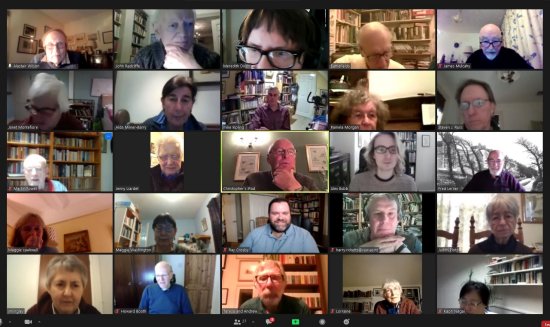 Since activity has been curtailed by the pandemic, we have been holding sessions for members on Zoom at which people read some of their favourite extracts from Kipling’s poems and stories.

At our last t reading we had some thirty members taking part, from as far afield as   Wellington New Zealand, and Vermont.

Some of our mainstays 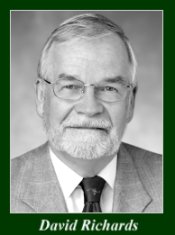 David Alan Richards is President of the Society. He is the author of the most recent and most definitive bibliography of Rudyard Kipling, an indispensable guide to his works for scholars and collectors.

A lawyer by profession, based in New York, he has long collected and studied Kipling’s works. His collection, now gifted to Yale University, is the most comprehensive ever assembled. As well as the bibliography, published in 2010, he has written several accounts of Kipling’s writings. 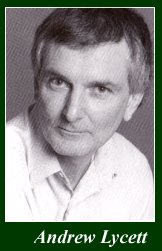 Andrew Lycett is the author of the deeply researched biography of Rudyard Kipling, published in 1999, which has become a standard work of reference for scholars and Kipling readers.

A former foreign correspondent, he has also published biographies of Dylan Thomas, Conan Doyle, Ian Fleming, and Wilkie Collins, and a series of collections of Kipling stories, articles, and verse. 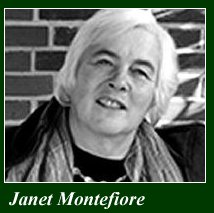 Jan Montefiore has edited the Kipling Journal since June 2013 and chairs the Society’s Council.

Professor of 20th Century English Literature at the University of Kent, she is the author of many studies, including Rudyard Kipling (Northcote House, 2007), and has edited In Time’s Eye, Essays on Rudyard Kipling (Manchester University Press, 2013). She chairs the Society’s Council.

She has directed four international Kipling conferences including ‘Kipling in India: India in Kipling’, jointly with Professor Harish Trivedi (below). 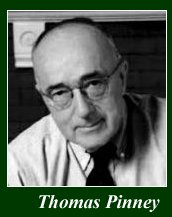 He is the editor of the comprehensive Cambridge Edition of the poems of Rudyard Kipling (2013), of the six-volume collection of the letters of Rudyard Kipling (Macmillan 1990-2004), of Kipling’s autobiography, and of a number of volumes of his uncollected articles and speeches, including The Cause of Humanity and other stories (2019) 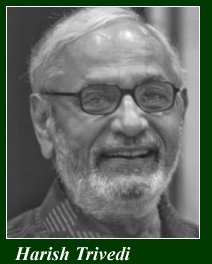 He is the author of Colonial Transactions: English Literature and India (Manchester 1995), and has a particular interest in postcolonial studies.

He edited Kim for Penguin Classics in 2011, and in April 2016 was the joint Conference Director with Janet Montefiore of ‘Kipling in India: India in Kipling’ at the Indian Institute of Advanced Study in Shimla. The book of the conference will be available after Christmas. 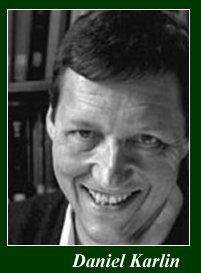 Daniel Karlin is Winterstoke Professor of English at the University of Bristol.

He has a particular interest in American literature, Robert Browning, Marcel Proust, Bob Dylan and Rudyard Kipling. He has been a frequent contributor to the Kipling Journal, and Kipling conferences. He edited Rudyard Kipling, a critical edition of the major works (Oxford, 1999). 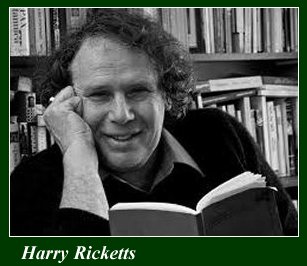 Harry Ricketts is a poet, biographer, editor, anthologist, critic, literary scholar and cricket writer. He is Professor of English Literature in the Victoria University of Wellington, New Zealand.

He has published around thirty books, including two widely read biographies, Rudyard Kipling: The Unforgiving Minute and Strange Meetings: The Lives of the Poets of the Great War, eleven collections of poems (most recently, Winter Eyes), and a number of anthologies.

As a member of the Kipling Society you can join in our meetings, swap ideas, find out more about what Rudyard Kipling wrote and what people have said of it since, read our quarterly Kipling Journal, follow our regular newsletters, use our library, explore this web-site, take part in on line chats on our Facebook page, and Tweet to fellow members.

You can be sure of a friendly welcome.

The rates for members outside the UK cover the additional cost of postage.

If you are within reach of London, you can also come to the Society’s regular meetings and other functions. If not you can join us on Zoom.

You can register as a member and pay your subscription via PayPal here.

Alternatively, we can accept cheques made out to The Kipling Society, and drawn on British banks in pounds, on US banks in dollars, or on European banks in euros. For other currencies please use either a Bank Draft or a Bank Transfer in £ sterling. Transfers should be made to the Kipling Society account at Lloyds, Old Bond Street, London, using our International Bank Account Number (IBAN) GB18LOYD30962400114978 and the Bank Identity Code (BIC) LOYDGB21014.

Our postal address is: The Kipling Society, Doomsday Garden, Horsham,West Sussex RH13 6LB, England. You can contact the Hon. Sec, Mike Kipling, by email at michaelrkipling@gmail.com