ORG Volume 8, page 5185 records first publication in the Civil and Military Gazette of 15 August 1887 (Verse No. 276), under the title of “The Frame and the Picture”. See also “Old Song” (Verse No.438) beginning
‘The sun went down an hour ago’, which heads Chapter XIII of The Light that Failed.

The poet sings of Simla and its neighbourhood, reflecting on daily events and pastimes, concluding, at the end of each verse, that if all these things continue, so will the love between his sweetheart and himself.

Whether he means it or not is open to question – see our notes on “The Lovers’ Litany” where the poet sings of romances with different girls, which, like those of the young Kipling, came to nothing.
Charles Allen (Kipling Sahib, p. 229) explains how Kipling took his inspiration for these verses from Captain Ian Hamilton, who was dismissed from the staff of General Sir Roberts, then Commander-in-Chief in India, and obliged to leave Simla immediately, interrupting a promising romance. (See “The Three Musketeers” in Plain Tales from the Hills p. 75, line 32).
Charles Carrington (p. 76) notes that Hamilton sent some of Kipling’s writings to literary friends in England, a couple of years ahead of his spectacular success in London.

Kalka a village at the foot of the Himalayas on the road from Umballa to Simla. 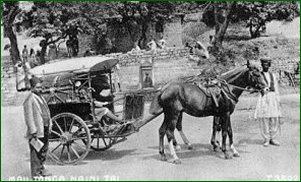 tonga-horn a tonga is a two-wheeled cart drawn by two ponies. See our notes on “As the Bell Clinks”.

Solon a hill-station on the road and railway from Kalka to Simla.

Tara Devi the Temple of the goddess Tara, some 7 miles (11 Km) from Simla. Tara Devanagari, meaning “star”, is the second of the Dasa (ten) manifestations of Mahadevi, Kali, or Parvati, seen as the hunger that propels all life.

Simla Summer capital of the Government of India. See our notes on “A Tale of Two Cities”, and “Mrs. Hauksbee Sits Out”. The social whirl and the scandals that went with it provided a vast supply of material which Kipling used to great effect. See also Charles Carrington Chapters 4 and 5.

Aces take the King at games of cards the Ace is normally superior in value to the King.

Annandale a valley near Simla with Racecourse, Cricket and Recreation Grounds.

Jutogh a cantonment town in Shimla district in the Indian state of Himachal Pradesh.

Polka a lively dance with music played in double time.

Kitchen Lancers a graceful and lively dance for ladies and gentlemen introduced into the United Kingdom in the early 19th Century. It sometimes developed into a more energetic version known as “Breakneck Lancers” or “Kitchen Lancers”, and there were occasionally reports of broken limbs.

Lotteries forms of gambling, like a raffle. when lots are drawn for a prize.

Whatshername a portmanteau word used when the speaker has forgotten a name (‘What’s her name ?’)

Lucre a somewhat derogatory term for monetary profit, in this context perhaps a bribe

unloaded guns suicide was often described as “An accident while cleaning an unloaded gun.”

rumours from the North families with men fighting on the North-West Frontier would be distressed by unconfirmed rumours of casualties.

Burma (Now Myanmar) was annexed by the British in 1886. See “The Taking of Lungtungpen (Plain Tales from the Hills), and “Georgie Porgie” (Life’s Handicap). Also Kipling’s verses “The Grave of the Hundred Head”, “Mandalay”, and “One Viceroy Resigns”.

typhoid a dangerous and at that time often fatal fever transmitted by food or water contaminated with the faeces of an infected person. See “Kipling and Medicine” by Dr Gillian Sheehan. See also Kipling’s verse “Municipal” and Something of Myself, p. 41.

Boileaugunge Boileaugunge Road was parallel to and below The Mall in Simla, and was named after a Captain Alexander Boileau engaged in the Survey of India in the 1830s. [John Keay, The Great Arc, The Dramatic Tale of How India was Mapped and Everest Named, Harper Collins 2000]

Simla Downs Probably the Old Cemetery at Simla which features in some of the Indian stories. See “The Pit that they Digged”. 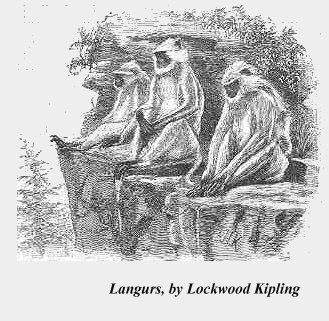 See “The Miracle of Purun Bhaghat” (The Second Jungle Book) and “The Bridge-Builders” (The Day’s Work). 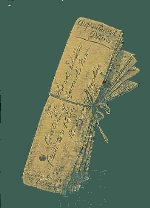 Docket a file of documents – papers secured together in a folder as office records. The first edition of Departmental Ditties appeared in the guise of a government docket. See Something of Myself p. 68.

Billetdoux a love-letter, from the French billet (note) and doux (sweet). 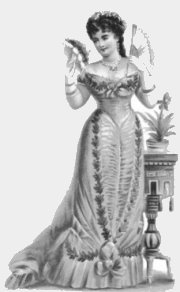 Fan a device held in the hand, and often decorated with painting or lace, for creating a current of cooling air, used by ladies of the period. It could also be made to conceal or reveal the face, and there was a code of signals by which a lady could use her fan to show her intentions towards a man who had caught her eye.

Office-box probably a combined chest and desk that could be taken out when an officer was on tour.

Corset a garment of cloth and whalebone worn by a lady – usually under her dress – designed to give her the classic “hour-glass” figure.

Plume a feather or tuft of similar material worn in the head-dress to identify the regiment of the wearer.

Spur Spurs are devices worn on the heel of each riding-boot to encourage a horse to go faster by pressing them into the flank.