The story was published in the Civil and Military Gazette on March 11th 1887, in the first Indian edition of Plain Tales from the Hills in 1888, and in subsequent editions of that collection. See David Alan Richards p. 17, passim.

This is the first appearance of Kipling’s ‘Soldiers Three’, Terence Mulvaney the Irishman (pronounced Mulvanny), John Learoyd from Yorkshire, and the London cockney, Stanley Ortheris. They are experienced old soldiers, crafty, tough, and humorous. Here a visiting Lord has asked for the regiment to be turned out for an extra parade, which is deeply unwelcome to all. The Three stage a mock abduction, in which his carriage is run away with, amid much noise and many murderous shouts. They then come to the rescue, finding him terrified by ‘the bandits’ and too shaken to attend the parade which is cancelled. He rewards them handsomely.
The Soldiers Three 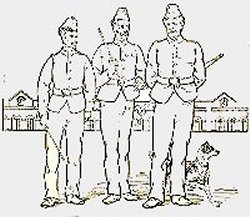 Kipling wrote eighteen stories about the adventures of these three private soldiers, some hilariously humorous, others grim and tragic, inspired by his acquaintance with the British regiments in and around Lahore. They were also, of course, celebrated in his Barrack-Room Ballads. Each man speaks in his own dialect, Irish, Yorkshire and Cockney, which some commentators have found irritating while others marvel at his mastery of the language. What is undeniable is that Kipling was the first writer in English to creat great literature out of the lives of common soldiers.

In 1885 Kipling was admitted to the Masonic Lodge “Hope and Perseverance No. 782 E.C.” at Lahore; he was under age, but they wanted a Secretary. At that time there was a Military Lodge at Mian Mir, Lahore Cantonement (pronounced Cantoonment) and among the members were Surgeon–Captain Terence Mulvaney and Lieutenant Learoyd, Royal Artillery. Kipling may well have met them and borrowed their names for these stories. There is no information as to their personalities or even if he obtained permission to use their names but they may well have left the Station and probably the country before they appeared in print. There is likewise no information as to the origin of the third name, but it has been suggested that when Kipling asked himself “Who is to be the third Musketeer?” he answered himself “The author is !” (Ortheris)
John McClure in Kipling and Conrad, The Colonial Fiction (p. 21) puts forward an interesting suggestion; like the three schoolboy heroes of Stalky & Co., the grown-up children of Soldiers Three [in which several of their adventures are collected] only appear to be rebels. In fact they are dedicated defenders of their masters’ authority.

See “Kipling and the British Army in India” by Charles Carrington, and ORG Volume I, page 7, Preface No. II “Mulvaney.”