First published in Civil and Military Gazette, May 9th, 1887 under the title “The D.C.’s Story”.

F. A. Underwood (KJ 188 for Dec 1973, p. 10) notes that “Municipal” illustrates the major linguistic changes Kipling made for this collected edition, omitting Anglo-Indian expressions. Originally, he notes, the poem began:

‘It was an August evening and, in snowy garments clad,
I took my hawah-khana round the lines of Hezabad,
When, presently, my Waler saw, and did not like at all,
A Commissariat hathee, nautching gaily down the Mall.
I couldn’t see the driver, and across my mind it rushed
That that Commissariat hathee had — forgive the rhyme — gone musth’

The Waler originally jumped an ekka rather than a bullock, patent wheels were shisham wheels and, ‘Before they called the drivers up’ read, ‘Before they got the up’.”

Kipling was strongly interested in issues of hygiene and health in Indian towns and cities, and the tendency of municipal authorities to ignore them. See City of Dreadful Night, eight articles published in The Pioneer in March/April 1888, based on Kipling’s visit to Calcutta that year. See also “My Lord the Elephant” in Many Inventions for a similar incident.

[Title] Municipal The word simply means ‘relating to a town or its government’. The poem describes a seemingly trivial episode, to do with drains. However, as Kipling well knew from his journalistic work in the streets and alleyways of Indian towns, sewage disposal could loom large as a municipal issue.

As noted above, the poem was originally entitled “The D.C.’s Story.” We may therefore guess that that (Line 2) ‘Binks’ was the District Commissioner, and that ‘Hezabad’ was the seat of his jurisdiction. [A.W.]

[Line 4] fad A fashion or craze. As in “A Legend of the Foreign Office” Kipling evokes images related to drains and sewage-outfalls which seem to work as an autobiographical hint, as they were lifelong interests in his own career:

“Drains are a great and glorious thing and I study ’em and write about ’em when I can … one decent primer on Sanitary Engineering and sewage disposal is worth more than all the tomes of sacred smut ever produced” [ “To W. C. Crofts, 18-27 February 1886” in Thomas Pinney (Ed.), The Letters of Rudyard Kipling. Volume I, pp. 121-122.] See also Gillian Sheehan’s article on Sanitation in this guide.

[Line 5] I learnt a lesson once Kipling uses this expression to introduce the lines that follow, which narrate the episode of the elephant-hunted Binks, who is defined a “most veracious man” in the next line. This is one of the examples in which introductory lines of verse are directly linked to the subsequent text and act as a pilot-entry to it; other examples of this technique so far in the collection have been, in particular, “Study of an Elevation, in Indian Ink”, “A Legend of the Foreign Office”, “Public Waste”, and “Delilah”.

[Line 6] quoth This simply means ‘said’ or ‘declared’. This form is the first and third person singular past tense form of an Old English verb, cwethan, meaning ‘speak’, or ‘say’. The rest of the verb has long been obsolete, but the archaism ‘quoth’ was used fairly frequently in Victorian verse for humorous or stately effect. This emphatic terminology may thus be hinting at Binks’s wisdom: Kipling not only reports his story but seems to present it as a sort of parable, suggesting that good may come from accidental causes, or – perhaps – that the British in India did not always know what would be the results of their actions.

[Line 8] the lines of Hezabad the roads. The European quarters were usually grafted on to the old Indian cities and towns, and were laid out in straight lines. [A,W.]

[Line 9] Waler A light saddle horse of mixed breed developed in Australia and exported widely to British India during the 19th century. They originated in New South Wales – hence ‘Waler’. 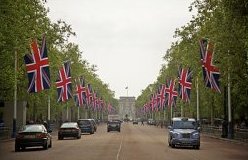 the main avenue, named after the Mall in London, the wide avenue leading to Buckingham Palace. In its present form, it dates from the start of the 20th century, but there had been an avenue, and later a road there since the building of Buckingham House in the 17th century.

There was a Mall in many British settlements in India – in Simla, for instance. See also l;ine 2 of the penultimate verse of ‘The Ballad of Boh Da Thone”:

“She’s always about on the Mall of a mornin’-”

[Line 12] That Commissariat elephant had suddenly gone musth Mad. Musth is a state of excitement to which elephants are periodically liable. Their keepers understand and provide for it. Mere bad temper is quite different. In “My Lord the Elephant” (Many Inventions) a mahout says that when a elephant is angry he will kill any one except his keeper, but when he is musth he will kill his keeper first.

In the same story, told by Mulvaney, an elephant loses his temper, creates a panic, and chases an officer, who – in an echo of this poem – takes refuge in a drain:

“a gunner orf’cer in full rig’mentals down the road, hell-for-leather, wid his mouth open’ till the officer ‘dived like a rabbut into a dhrain by the side av the road.”

praise Dykes presumably the coachbuilder who made the buggy. [A.W.]

[Lines 18-22] the creature making toothpicks of my five-foot patent wheels; he snorted in my ear: the brute’s proboscis; heard it trumpet on my shoulder…. The description of the elephant seems intentionally hyperbolic, not only to indicate its massive weight – realistically oversized if compared to Binks’s – and beastly outlook and frenzy, but also to increase the comic effect of the description of the chase.

[Lines 22 and 27] my terror-stiffened hair… my hair was turning grey Kipling sustains his reference to ‘hair’ to depict Binks’s fearful reaction: these lines give an almost pictorial, hyperbolic description of his state of anxiety, as found in illustrations and cartoons of the time.

[Line 23] trumpet The brassy resounding call of the elephant.

[Line 26] feeling blindly for a purchase The elephant was doing all it could to grip his vicitim by the toes and haul him out.

[Line 32] periwinkle a small blue garden flower, which tends to spread like a weed [A.W.]

[Line 34] This is why the death-rate’s small As John McGivering points out in the Kipling Jopurnal, this line gives the impression that the protagonist:

…made the City Elders flush their drains so that he would have a better chance if he were chased up one by an elephant again!, and not for sanitary reasons. [‘Kipling’s Army and Navy’ KJ 191 September 1974: p. 4)

Drains, sewage and public health were of major concern to Victorians wherever they were. So ‘Binks of Hezabad’ was bound to try to improve the drainage of that city. ‘Surface drainage’ – open ditches – could be, and often was, blocked by litter, large and small. So Binks believed in ‘well-flushed culverts’ (covered drains). Quite apart from the health aspects of good drainage, there was also a matter of coping with monsoon conditions – a freely-running system of drains was essential. [A.W.]