This is one of the stories published by the CMG after Kipling had left India on 9 March 1889 to seek his fortune in London. It would almost certainly have been written whilst he was also writing his “Letters” for the Pioneer that were later collected in From Sea to Sea.

.In order of appearance it falls after “A Menagerie Aboard” but before “Of Those Called” and “It !”, all of which have a shipboard theme and could have been based on incidents or tales that Kipling heard whilst sailing from Calcutta to Japan.

The stanzas quoted throughout the story are numbers 1, 2 and 4 of that well-known hymn “Eternal Father, strong to save”, by William Whiting (1825-1878). Kipling does however give some variants from the current standard version, but we have not been able to determine whether they are misquotations or an alternate version of the hymn, probably the former.
.

[Heading] ‘Eternal Father, strong to save’ Lines from the hymn by William Whiting (1825-1878) No. 370 in some editions of Hymns Ancient and Modern – Kipling’s version differs slightly but he may have been quoting from memory, as he often did. 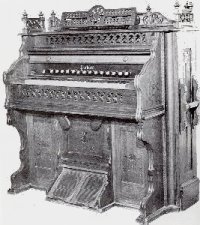 harmonium a musical instrument like a small organ (right), the sound being produced by air from pedal-operated bellows forced through reeds.

cuddy in a sailing-vessel, the cabin(s) under the poop for master and passengers. It can also mean a small cabin which is probably the meaning in this case, as the master’s cabin would be within the superstructure in this vessel.
.

wheel-grating a perforated wooden platform on which the quartermaster stands at the wheel – this must be the emergency steering-gear aft as the main wheel would be on the bridge in a vessel of this era.

screw the propeller, which makes a characteristic ‘threshing’ sound when revolving.

Malacca the third smallest Malaysian state, after Perlis and Penang; located in the southern region of the Malay Peninsula, on the Straits of Malacca. It borders Negeri Sembilan to the north and Johor to the south.

Visigoth we have not traced a vessel of this name for the approximate date of the disaster, which we assume to be twenty years before the publication of the story, around 1869. This would make the date of her launch about 1864. She would most probably have been built of iron which is not as strong as steel – see the notes on “The Mary Gloster” line 54.

five hundred tons see the Note to “The Ship that Found Herself” in The Day’s Work, page 78, line 2 .

best found in this context, very well equipped with all necessary gear of high standard.

Kutch (also spelt Kasauli) a formerly independent district of Gujarat state in western India, here disguised as the name of a fictitious shipping-line.

struck even a log somewhat of an exaggeration. But a heavy floating object may well have perforated a plate.

perhaps five hundred deck-passengers assuming some 12 square feet per person, they would need 6,000 sq. ft. (557 sq. metres) of deck which would strictly not be available on such a vessel.

nine knots an hour a frequent error of Kipling’s – a knot in this context is a speed expressed in nautical miler per hour. Speed at sea is expressed in ‘knots’ rather than ‘knots an hour’ and no sailor would use the latter expression.

sinking at the head going down bow-first – no explanation is offered but there are many things which might have gone wrong, including striking the floating log above.

pyjamas still a newish word at the time, which is why it is in italics. Hobson-Jobson (page 748) has :’pyjama, from the Hindi pae-jama, leg-clothing, a pair of loose drawers or trowsers.’

starboard the right-hand side of a vessel, looking forward

biscuits and water the classic lifeboat-rations of the time

lascars sailors, usually referring to seamen from the countries bordering the Indian Ocean or China Seas. Hobson-Jobson maintains that the word is derived from the Persian lashkar – army – and has somehow come to its present meaning.

the rule in these affairs we have been unable to trace such a ‘rule’, but the captain might well suffer professional ruin if he survives, and so decides he cannot face life in such circumstances, like E.J. Smith who went down with the Titanic when she hit an iceberg and sank in 1912.

a big steamer a vessel propelled by steam-power, capable of sailing on any seas in the world.