First published in the Ladies’ Home Journal, Dec. 1901, illustrated by Frank Verbeck. Collected in Just So Stories, with illustrations by the author, and followed by the poem “There runs a road by Merrow Down” (collected in Songs from Books and subsequently as part I of “Merrow Down”).

Tegumai Bopsulai, a neolithic man, lived in a cave with his wife Teshumai Tewindrow and their daughter Taffy. One day he and Taffy went to the Wagai river to catch fish. He accidentally broke his fishing-spear. He started to mend it, having left his other spear at home.

A stranger came along who did not speak their language. Taffy asked him to take a message to her mother and bring Tegumai’s other spear. The stranger gave her a piece of birch bark to show his good intent. She thought he meant her to draw her message on it, since she could not write. 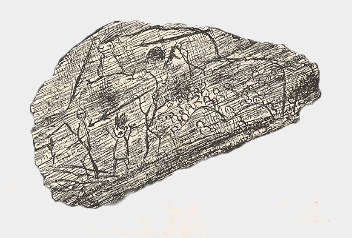 With a shark’s tooth from her necklace, she drew her father, a broken spear, herself and the man, also a swamp full of beavers on the way to their cave. The stranger believed her shark’s tooth was magic and that her father, who was concentrating on his task, was a great chief, in danger from his enemies (the beavers).

The stranger found the cave, where Teshumai had invited some neolithic ladies to lunch. On seeing Taffy’s picture, she thought it meant that the stranger had attacked Tegumai, terrified Taffy and drawn their picture in triumph. So she and her friends knocked him down, sat on him and beat drums to summon the whole tribe. The stranger led them all to the river, where Taffy had to explain what her picture really meant, and an angry scene ended in laughter. The stranger was then adopted into the tribe.

The manuscript of the story is in the volume “Just So Stories” at the British Library, where it is dated “Sep. 1900.” This would seem to identify it with something called “Neolithic Ladies,” mentioned in Carrington’s notes from Mrs Kipling’s diaries on 19th Sept. 1900.

There is no direct evidence for the date of the oral version. It is generally agreed that this and “How the Alphabet was made”, the following story in Just So Stories, describe Kipling’s relationship with his older daughter Josephine, born December 1892. Taffy was one of her nicknames [Pinney ed., Letters, vol. 2 p. 310, letter to C.E. Norton, 16 Aug. 1897]. In November 1896, Kipling had written to his friend Dr Conland that they had hired a governess for her [Pinney ed., Letters, vol. 2 p. 273, 8-24 Nov. 1896]. On 7 Jan. 1897 he wrote to his aunt Louisa Baldwin that she was nearly ready to read, but that they were trying “to keep her back” [unpublished letter, the Kipling Papers, University of Sussex Library].

On Oct. 11 1898, Mrs Kipling wrote in her diary that her husband was writing a children’s story “modelled on the totem tales,” which is presumably “The Tabu Tale,” collected only in Scribner’s Outward Bound edition (vol. 20) and the Sussex and Burwash editions, vols. xvi and xiv respectively; there is a totem pole in one of Kipling’s illustrations to this story. Here the little girl is also called Taffy. Sometime in 1897 or 1898 therefore seems a likely date for the oral version of “How the first Letter was written.”

Josephine died of pneumonia in March 1899. Her father, who had pneumonia at the same time and almost died as well, took a long time to recover – indeed, his cousin’s daughter Angela Thirkell would write that he was never the same man afterwards [Angela Thirkell, Three Houses, London, Oxford University Press 1931, p. 86]. It was four months before he could work again. The first writings he was well enough to produce were some of the earlier Just So Stories [see notes on “How the Leopard got his Spots” , “The Elephant’s Child”, and “The Sing-Song of Old Man Kangaroo” ]. If by September 1900 he was able to put this story on paper, it suggests that he had come to accept his loss of Josephine.

It is possibly relevant that in “ ‘They’ ” (Traffics and Discoveries, 1904), a story in which the narrator mourns for his dead child, it is in the late summer that he endures a final crisis of grief.

the prehistoric background of the Taffimai stories … offered me a fascinating blend of the cosy and the infinitely distant. How thrilling to a child is … the thought that dark-haired Phoenicians once brought their goods to a place called Merrow Down above the River Wey – obviously in England, although not known to me. I did not know what ‘racial talks’ were, or ‘gay shell torques’ which sounded the same, and no one bothered me by explaining; they sounded satisfactory when I repeated the lines or my mother sang them. But the great joy was the pictures …
[pp. 55-6].

My own early favourites among the Just So Stories were the two tales of Taffy and her father Tegumai, the first because it made me laugh until I curled up like an earwig …

But for Angus Wilson:

When the stories of private man’s advancement begin, we are in the land of Tegumai and Taffy, of Kipling and his own children, and sentimental whimsicality takes over… [p. 229].

The tales call consistently for a suspension of belief and a suspension of disbelief, as the humour both undercuts and enhances the stylistic effect. The narrative loses none of its excitement as the tension mounts, while simultaneously it adds the savour of its own telling [quoted p. 119, lines 13-24].
The style is self-conscious in the best sense, and it develops an irony – if one may so term it – specifically adapted for appreciation at an early age. It should not be long before the listener can begin to relish to the full remarks at first bewildering – “Why, the whole dear, kind, nice, clean, quiet Tribe is here, Taffy” – or the deliberately begged question, “Aren’t you well, or are you ill, O Tribe of Tegumai?”