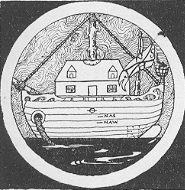 Apart from being a phonetic rebus for Kipling’s “RK” initials, the image of Noah’s Ark has a strong connection with his daughter Josephine, original of Taffy. When she was 18 months old, she had been given a Noah’s ark which became a favourite toy [letter to Louisa Baldwin, 15 June 1894, Pinney ed., Letters, vol. 2 p. 130].
The markings on the hull in this drawing are the load lines or Plimsoll lines, so-called after Samuel Plimsoll, the reformer who was responsible for a legal requirement that they should be marked on all ships of British registry. They show the highest water level for safety. “NAS” stands for North Atlantic Summer and “NAW” for North Atlantic Winter. “RK” is outlined on the right hand side, just above sea level. The flag bears the initials of Noah and his sons, Shem, Ham and Japhet.

[Page 111, lines 5-6] Jute … Angle … Dravidian Jutes and Angles were two of the Germanic tribes that invaded England after the departure of the Roman army in the 4th century A.D. Dravidian is a name for an indigenous inhabitant of south India.

[Page 113, line 6] it’s an awful nuisance … how to write Instead of this in the Ladies’ Home Journal: “it’s a bother that there isn’t anyone that we could send with a message for the new spear.”

[Page 115, line 15] draw pictures After this in the Ladies’ Home Journal: “but she didn’t stick her tongue out”. 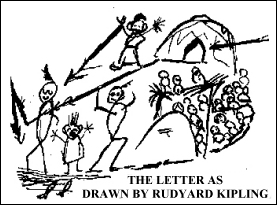 There is a version of Taffy’s drawing there, but it is much simpler than the one in the book.

[Page 119, lines 17-20] Hetmans Leaders of the Don Cossacks under the Russian Tsarist regime.

Neguses Negus was a title of the Emperors of Ethiopia.

Angekoks Inuit sorcerers or shamans (there is one in “Quiquern,” The Second Jungle Book).

Bonzes A term for Buddhist priests (used of the Lama in Kim, ch. XIII, p. 342 by one of the Russian spies).

[Page 120, line 22] Hundreds A hundred was a division of an English county, originally supposed to contain 100 families.
Platoffs with their Platoons Platoff was the name of the leader of the Don Cossacks during the Napoleonic wars. A Platoon is a military squad, sub-division of a company.

[Page 120, lines 28-9] feudal and prognathous Villeins The following phrases bear little relation to life under the historical feudal system. Prognathous means having a projecting jaw. Villeins were serfs, free in all but relation to their feudal lords, for whom they were obliged to work.

[Page 120, line 31] adscript serfs Peasants bound to work for a feudal lord on a given piece of land.

[Page 120, line 32] heriot A fine due from a tenant on the death of his lord, usually his best beast or chattel.

[Page 121, line 21] They were thumping him …point at Taffy This passage is not in theLadies’ Home Journal.

This is the stori of Taffimai all ritten out on an old tusk. If u begin at the top left hand corner and go on to the right u can see for urself the things as tha happened.
On the right side:
The reason that I spell it queerli is because there are not enugh letters in the Runic alphabet for all the ourds hat I ouant to use to u o Belofed.

The part below the tusk is given in ORG:
This is the identical tusk on ouch the tale of Taffimai ous ritten and etched by the author.

Runes were supposed to have magic properties: in the Icelandic Egil’s Saga, an ignorant would-be lover makes his beloved ill by putting a misspelt love rune in her bed. The male figures on the tusk appear North American; the principal female figure looks like a cartoon portrait of Mrs Kipling.

[Page 123, lines 21-8] Then the Head Chief … surprises the stranger This paragraph is not in the Ladies’ Home Journal.

[Page 129, line 1] Merrow Down Merrow was a village near Guildford in Surrey (now a suburb). Kipling’s friend John St Loe Strachey lived at Merrow Down, where the family visited him. Bramley, Shere and Shamley [Green] are place-names in the same area, as is the river Wey, a tributary of the Thames.