This story was first published in The Delineator in January 1910, and collected in Rewards and Fairies later in the same year.

In their local church the children meet Wilfrid, Bishop of York in the seventh century. He tells how he spent time in Sussex, converting the South Saxons, a strange people, much given to suicide, to Christianity. He makes friends with Meon, one of their chieftains, who is a sceptic, but this does not stop them having a civilised dialogue. The King has ordered the people to be baptised, but Meon thinks this a cynical ploy to curry favour. Meon has a tame seal, Padda, but Wilfrid’s chaplain Eddi insists that seals are demons. 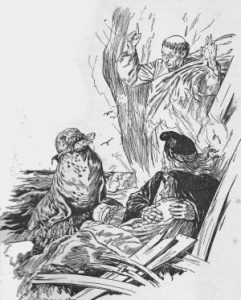 One day, Wilfrid goes fishing with Meon and Eddi. They are caught in a storm, and washed up on a rock at risk of their lives. As they huddle on a ledge in the cold and wet, hour by hour, Meon asks Wilfrid if he should convert to Christianity. Wilfrid responds that he should not desert his gods just to seek favour in a moment of crisis.

They are rescued when Padda, the tame seal, finds them, brings them fish, and goes for help. Eddi calls a blessing on the creature: ‘God sent him out of the storm to humble me, a fool’. Home in his hall, Meon tells the people how in that desperate time of danger Wilfrid had urged him to keep faith. ‘…a faith which takes care that every man shall keep faith, even though he may save his soul by breaking faith, is the faith for a man to believe in. So I believe in the Christian God…’

St Wilfrid (634-709) was one of the leading English ecclesiastical figures of the second half of the seventh century. Preacher to pagans in Frisia and Sussex, and a notable builder of churches and monasteries, he introduced the Rule of St Benedict in monasteries in the north of England, and reformed Church music. His stormy life – he was engaged in repeated conflicts over his bishopric and three times exiled – bears out his comment in the story: `On sea and land my life seems to have been one long shipwreck.’

It was during his second exile that he converted the pagan enclave of the South Saxons. The Latin Life of Wilfrid by his chaplain Eddius Stephanus was edited by J. Raine in The Historians of the Church of York and its Archbishops, vol. i (1879). It is available in the Penguin Classics Lives of the Saints, trans. J. F. Webb (1965).

The story is accompanied by two poems: “Eddi’s Service”, and “Song of the Red War-Boat”,

… the story records the `conversion’ of both Eddi and St Wilfrid to a spiritually richer, more tolerant belief. “The Conversion of St Wilfrid” opens out to an affirmation of the need for a broader spiritual sense, a redefined Christianity, which can accommodate the non-Christian (Meon). What the Christians come to understand, through their friendship with the pagan scholar Meon, and after a narrow escape from death at sea, is the need for absolute compassion: `I had learned a great deal’, St Wilfrid tells Dan and Una at the end. `One should deal kindly with all the creatures of god and gently with their masters. But one learns late’…

…”The Conversion of St Wilfrid” suggests that nobody has the right to criticize another’s faith, and that the impulse to conversion must be heartfelt and willing. `No God in any Heaven shall say that I came to him or left him because I was wet and cold’, Meon says to St Wilfrid, and he claims to be converted only after St Wilfrid counsels him to stand by his own gods… 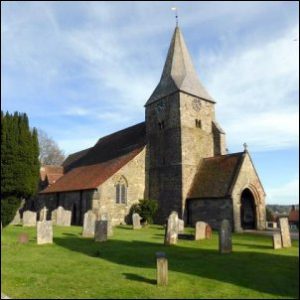 [Page 224, line 12] Panama Corner there is a slab in the church with the inscription given in the text. It may be translated as `Pray for the soul of John Collins’.

[Page 225, line 16] “Oh, all ye works … magnify him for ever” from the canticle, “Benedicite, Omnia Opera” incorporated in the Order for Morning Prayer of the Anglican liturgy. It comes from the version of the Book of David in the Apocrypha, the collection of Christian writings which were not accepted as part of the Old or New Testaments.

[Page 226, line 24] my own Northumbrian folk As Bishop of York, Wilfrid’s See covered the whole of Northumbria, the northenmost county of England.

[Page 230, line 15] they all said it was a miracle this story is not in the Life of Wilfrid. Kipling may have derived it from Hone’s Everyday Book which gives it in the course of a biographical sketch of Wilfrid. It is also mentioned in Bede’s Ecclesiastical History, Bk IV, ch. 13, which, unlike Kipling’s story, connects the suicides only with the famine. Bede gives ‘Padda’ as the name of one of Wilfrid’s priests.

[Page 240, line 8] Balder son of Odin, the most beautiful and beloved of the Norse gods, slain (in the best-known version of the myth) through the craft of Loki.

[Page 240, line 8] Thun presumably a variant of Thunor, a name under which Thor was worshipped by Germans and Anglo-Saxons.

[Page 241, line 5] Dies Irae one of the most famous of medieval hymns, attributed to the Italian Franciscan Thomas of Celano. The lines quoted here might be rendered as follows:

The day of wrath, that awesome day,
will dissolve the world in flame,
as witness David and the Sibyl.
The trumpet wondrously resounding
through the graves of every region
will all compel before the throne.
Merciful Jesus, call to mind
that it was for my sake you journeyed.
Destroy me not upon that day.’

Lascelles (The Story-Teller Retrieves the Past, page 131) comments that the use of the hymns of the medieval Church, here and in “A Centurion of the Thirtieth”: `generates a peculiar impression as of that middle state in which a dream expands and brightens before it dissolves. This impression is not shared by the children.’