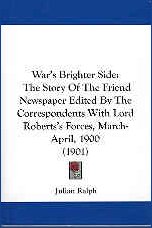 This poem was first published in The Friend of Bloemfontein on April 2nd 1900. Julian Ralph, who worked on The Friend with Kipling in March 1900, writes in his memoir War’s Brighter Side (Appleton and Company, New York 1901) that the poem, which is to be found on pp. 300-301, was:

…originally written some time ago to be read at a dinner in Canada and then published in the Toronto G;obe. It has never been read in public and has never before been published.

It was published in the New York Tribune on 17th May 1900 under the title “The White Man’s Song”, and in the London Daily Mail on 1st June 1900. It was also reprinted in Santiago de Chile as part of the unauthorised collection With Number Three, Surgical and Medical, 1900.

The poem is also collected in:

The poet sings of the mission of the ‘White Men’ to go forth and right wrongs and ensure freedom – ‘for themselves and their sons’. Like “The White Man’s Burden” (February 1899) it is an assertion of the civilising imperial role of the British, and the other peoples of British stock, and its benefits to the world.

It was first published in Bloemfontein, the capital of the Orange Free State, which had just fallen to the army of General Roberts, in the heat of the Second South African War (1899-1902). The tide was turning against the Boer Republics, and General Roberts, with an astute eye to public opinion, wanted all to understand how the British saw things. It is deliberately partisan, asserting the moral basis of the war against the Boers.

When Kipling writes of “White Men” he is referring to the British, as opposed to the Boers, who were largely of Dutch and French extraction, irrespective of the fact that they were equally ‘white’. He never showed much awareness of black South Africans, nor would they have been in his mind when the poem was published. This was, as the title of a story published the following year suggests, “A Sahibs’ War” (Traffics and Discoveries).

Kipling had spent the winter of 1898/9 in South Africa, and had a deep affection for the country. In the rivalry between the British and the Boers in Southern Africa he was firmly on the side of the British. The South African War, seen by the British as a means of asserting their authority over the Boer republics of the Orange Free State and the Transvaal, and initially supported with enthusiasm by the British public, broke out in October 1899.

Kipling went out to South Africa in January 1900 and spent three months there, visiting various army units, including a hospital train, talking to the soldiers, working for a few weeks on The Friend, and writing a number of stories and poems about the war. He was delighted to meet young Canadians, Australians, New Zeaalanders, and Americans—’White Men’—fighting on the British side.
Charles Carrington (p. 307) writes of Kipling and his associates working on The Friend newspaper, which was set up in Bloemfontein soon after Lord Roberts had taken the city:

Their status was demi-official, since Lord Roberts used The Friend as a propaganda sheet in which to make announcements to the people of the conquered Republic. The first page was taken up with official notices; the inner pages contained campaigning news, local gossip and a few cables from overseas, and a great deal of light reading for the troops. Rudyard contributed a number of satirical pieces – “Kopje-Book Maxims”; “Fables for the Staff” and so on, and two poems which he thought worth a place in his collected works: “A Song of the White Men” – a still stronger version of “The White Man’s Burden” and the generous tribute written on the death of General Joubert, the enemy’s Commander-in-Chief.

For the background to the Second South African War see our notes on “A Burgher of the Frree State” and “The Science of Rebellion”. See also our notes on “A Song in the Desert”, a tribute to Perceval Landon, one of his colleagues on The Friend.

See also “South Africa” in “Themes in Kipling’s Works” for stories and articles on that country and on the war. The verse includes “The Absent-minded Beggar”, “Chant-Pagan”, and “M.I.” (Mounted Infantry). See also The Five Nations (1903), and the verses to be found on pages 458-486 of Definitive Verse and the Wordsworth Poetry Library edition of The Works of Rudyard Kipling.

When they go to right a wrong Ostensibly one of the aims of the war was to protect the interests of the ‘uitlanders’ in the Transvaal, who had come from many countries, including Britain, to exploit the rich goldfields of the Rand, and who were being denied political rights by the Boer authorities. See our notes on “A Burgher of the Frree State”.

dregs in this context the grounds or other refuse that settles in the bottom of a cup or glass.

Iron underfoot the deck of a ship – the upper deck was often known as ‘the iron deck’ even though she was built of steel..

levin lightning – but perhaps guns in this context. See Alastair Wilson’s notes on A Fleet in Being.

star a star used as an aid to navigation

This verse explains how settlers overseas expect the same rights under the law that they have enjoyed at home.