This account of a hospital train in South Africa was fgirst published in the London Daily Mail on 21, 23, 24 and 25 April, 1900, and in papers in Canada and the Unites States the same month.  It was accompanied by the poem “Pity poor fighting men”.

It was collected in the Sussex and Burwash editions, but was not given an “Uncollected” number by ORG probably because it appeared as a paperback, published by Hume & Co, in Santiago, Chile the same year. This, ORG suggests, is a “pirate” (unauthorised) edition, containing further stories and verse by Kipling, with articles by Julian Ralph, Charles E. Hind and Douglas Storey.

The other pieces by Kipling in this volume are recorded as:

KJ 035/98 reports the sale of a copy for £128 at Southerby’s in London in 1921.
Martindell (p. 68) records “With Number Three”, “Surgical and Medical” and New Poems (1900) with a photograph of the cover, and the observation that only six copies had been traced. As “Pity poor fighting men” the poem was set as a song for a baritone by Martin Shaw in 1919. (Mattinson)

During the Second South African War of 1899-1902, Kipling accompanies a hospital-train to collect wounded from the front and deliver them to a hospital-ship for return to the United Kingdom or to hospitals in and around Cape Town. An appreciative report in the British Medical Journal of April 28th 1900 gives an account of the articles on which Kipling’s piece was based:

Mr Kipling also is among the prophets who have risen to bless the splendid organisation for dealing with the sick and wounded in South Africa evolved by the officers of the
Royal Army Medical Corps. In his four letters which have been published in the Daily Mail the last on Wednesday, he gives a picture drawn with the graphic pen which probably he alone among modern living writers can command, of the journey made by one of the hospital trains from Capetown north to Modder Statioo, to bring down some of the wounded from Paardeberg. He describes how when the waggons came down from the hospitals:
“the doors of the cars drew back; orderlies went to their stretchers; the side boards were ripped out of the bunks; the cook put the last flavouriag to the big stock-pot; the sisters stood to attention, each in her ward–a doctor and a sister are responsible for half a train apiece–and the blessed morphine needles were made ready. They want rest from pain, our wounded. Food and clean sheets will often bring it, but on occasion we must help Nature.”

He describes the long journey down to Wynberg, the good-humoured, even humorous, talk of the wounded, the quiet efficient work of the surgeons, and the beneficent tyranny of the sisters. But the letters should be read by everybody who take any interest in the wounded and the people who look after them. 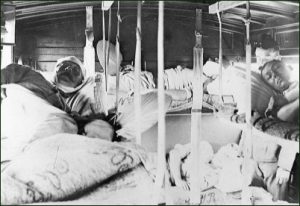 Plumridge describes Number 4 Hospital train (page 174) improvised from a dining-car, a post-office van and other vehicles – five in all. A couple of vans were added later. Water was carried in tanks beneath. The gauge of the mainly single-track is 3 feet six inches (1·05 metres.) Other trains were formed from unconverted stock and Princess Christian of Schleswig-Holstein suggested and raised money for a seven-coach train which was built in England and assembled in Durban in February 1900.

Disease in the South African War

The men on this train were lucky in that they were surgical patients who had proper attention and were soon, with any luck, in a hospital or on their way home in a hospital-ship. Byron Farwell (The Great Boer WarWordsworth 1999. p. 241) writes of the dreadful epidemic of enteric (typhoid fever).

There was no known cure for enteric fever, the treatment merely reduced the symptoms. The British army is South Africa suffered more casualties from this disease than other other army before (as far as is known) or since. Of the 13,250 deaths from disease, most were from enteric. 31,000 men had to be invalided home because of it. Among the 30,000 troops Roberts had at Bloemfontein, Dr. Conan Doyle estimated that there were between 8,000 and 9,000 cases of the disease.

Farwell goes on to explain how the fever is caused by drinking-water that has been contaminated by dead animals being thrown into water-courses from which the water-carts were filled. Inoculation had recently been developed but was not compulsory and was given in one enormous dose, the result of which seems to have been almost worse than the disease. (Kipling’s verse “The Parting of the Columns” refers to Bloemfontein as Bloeming-typhoidtein). 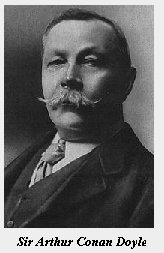 Conan Doyle, author of the Sherlock Holmes and other stories, who wrote a history of the war, had also visited Kipling in Vermont, (Charles Carrington, p. 205). However, it is not known if they met in South Africa even though Doyle was at the Langman Field Hospital in Bloemfontein (Martin Booth, The Doctor, The Detective & Arthur Conan Doyle, Hodder & Stoughton, 1997, p. 228.)

Kipling and the war

Kipling said that for most of February he was in and out of various hospitals in Cape Town – taking particular care that he was shown round by the Principal Medical Officer on each visit and was always told that they had everything they needed.
The nurses, however, told a different story in private – they wanted pyjamas for their patients which he obtained as explained in Chapter 6 of Something of Myself, some thirty-odd years later. It emerged that the stores had ample stocks but were often reluctant to release them.

See also Julian Ralph, War’s Brighter Side for his activities on The Friend of Bloemfontein newspaper, on which Kipling also worked, and Chapter Six of Carrington. See also Byron Farwell. The Great Boer War (Wordsworth Editions Ltd., 1976) with excellent maps and plans:

Kipling … turned to raising money for the Soldiers’ Families’ Fund . Of the more than two dozen poems the war inspired him to write, “The Absent-Minded Beggar” , his plea for the Fund was the most celebrated at the time.

See also ‘War or Battle’, and ‘South Africa’ in ‘Themes in Kipling’s Works’, and Mary Hamer’s notes on The Five Nations (1903), the verse collection which includes most of Kipling’s South African poems.

Meryl Macdonald (p. 129) looks at Kipling’s activities in South Africa during the Boer War, noting his concern at the welfare of the British troops and their families at home, which led to his writing “The Absent-Minded Beggar”, set to music by Sir Arthur Sullivan, and the raising of some three-quarters of a million pounds for their benefit. She also notes that on his annual holidays in South Africa he also visited sick and injured troops in hospitals and trains, writing letters home for some, and distributing tobacco to the rest, as also described in Something of Myself Chapter 6.

One type of character appears all through Kipling’s work. This is the resourceful young officer, military or naval, carrying heavy responsibilities with a cheerful countenance, formidable in jest or earnest. He met these young men in India and South Africa, at Portsmouth and Simonstown, in peace and war. The Infant, back from the Burmese war … Judson .. Stalky … The officers of the destroyer in “A Sea Dog” ( Collected Dog Stories), these are the same young men, functioning according to the circumstances in which they find themselves. They are brothers of the young veterans of “The Trade”, of whom he wrote with strong emotion in Sea Warfare. He called them children, and they cannot have liked it if they read him.

Philip Holberton writes: It is interesting that the tone of the lines that head this piece does not match the article it accompanies. In the article the wounded are not surly and grim, just grateful for clean clothes, clean sheets, and the care of the doctors and nurses and orderlies. Even those severely wounded and ‘permanently lost’ to the Army will find in England ‘their billets waiting, and they will return to live before the faces of their fathers.’ And ‘a slightly wounded man, as soon as he is mended, is lying to his doctor with intent to rejoin’. They do not mock the conquerors’ hymn: they themselves ‘have come out of a winning fight’.

See also the notes on the text for some points of detail.

Perhaps Kipling’s point lies in one word: in the original version the old fighting-men were broke in our wars. Kipling was looking forward and emphasising that when peace came the welfare of the veterans would still be the responsibility of the whole nation. Compare his poem “The Last of the Light Brigade.” [P.H.]