In The Friend, Bloemfontein, March 30 1900, under the title “The Death of General Joubert”; with the title “General Joubert” in Daily Mail April 4; April 4 New York Tribune; April 7 Harper’s Weekly. Reprinted in War’s Brighter Side, Julian Ralph, 1901. 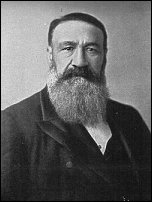 General Piet Joubert, Commander-General of the Transvaal forces since 1880, had been opposed to the move to war. He never fully recovered from the internal injuries sustained when his horse threw him the day after the battle of Willow Grange, the previous November. In a letter of condolence to Kruger Lord Roberts wrote of Joubert that: ‘His personal gallantry was only surpassed by his humane conduct and chivalrous bearing under all circumstances.’

At the time of Joubert’s death on March 27 Kipling was in Bloemfontein, where he joined a group of war correspondents in bringing out The Friend, a newspaper for the troops, in which this poem first appeared. Kipling encourages his first readers to identify with Joubert as a fellow soldier, so that Joubert’s legacy could help to found a future peace; at the same time he disparages the motives of the political leaders of the Transvaal in starting the war and dismisses their hopes of victory.

[Stanza 1] ‘those that bred, . . .those that loosed the strife’ Kipling’s attribution of blame to the leaders of the Transvaal is extremely partial. See the note on the background to The Five Nations.

[Stanza 3] ‘o’er his grave . . .our deep-tongued guns shall answer his. . .’ shots are fired over the grave at a military funeral. Kipling suggests that the British troops will join, figuratively, with the Boers in their act of mourning.