The poem celebrates the life of Kipling’s much-loved old friend Perceval Landon (1869-1927), his many travels in the wild places of the world, his uncomplaining endurance of dangers and discomforts, his magical tales, lightly told, and his shrewd criticism of Kipling’s own work. The ORG Editors believe that it was sent privately to Landon’s family before publication.

Like the “Dedication” to Barrack-Room Ballads (for Wolcott Balestier), “The Burial” (for Cecil Rhodes), and “Lord Roberts”, it is a whole-hearted tribute to a man whom Kipling loved and revered.

Landon was one of the most experienced foreign correspondents of his day, writing for The Times, the Daily Mail, and the Daily Telegraph. He reported from all over the world, mainly from Asia, including China, Japan, Siberia, India, Nepal, Russian Turkestan, Egypt, the Sudan, Mesopotamia, and Palestine. He also wrote a number of books, mainly about the places and people he had seen. 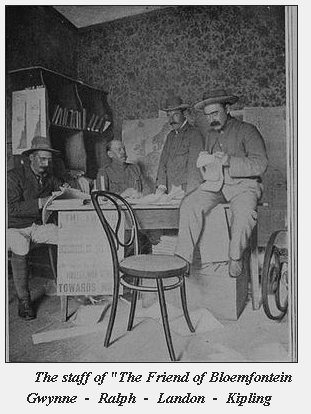 My Bloemfontein trip was on Lord Roberts’ order to report and do what I was told. This was explained at the station by two strangers, H. A. Gwynne, then Head Correspondent of Reuters’ and Perceval Landon of The Times. ‘You’ve got to help us edit a paper for the troops,’ they said, and forthwith inducted me into the newly captured ‘office’, for Bloemfontein had fallen – Boer fashion – rather like an outraged Sunday School a few days before.

Kipling had encountered Lord Roberts, the Commander-in-Chief in South Africa, in his days in India, and wrote affectionately of him in “Bobs” as well as the valedictory “Lord Roberts”. See our notes on “The Three Musketeers”.

Reuters’, for whom Gwynne (1865-1950) reported, was perhaps the world’s leading news agency at the time. Gwynne was to become Editor of the Standard and later the Morning Post, and another life-long friend of Kipling’s. Julian Ralph (1853-1903) an American journalist, was a third member of the editorial staff, and wrote an account of those days in War’s Brighter Side (Pearson, London, and Appleton, New York, 1901). See ORG Vol 3 p. 1530, and our notes on “A Burgher of the Free State”.

Kipling spent part of May visiting the Italian Front. As on his trip to France in 1915, he was accompanied by his Boer War friend Perceval Landon, a Batemans’ regular in the Edwardian years and from 1912 a frequent user of Keylands, a cottage on the estate. The trip produced more articles for the Daily Telegraph under the title ‘The War in the Mountains’.

… 1927 began badly, with the death of Perceval Landon. He had been a friend since the early days of the war in South Africa, and one of the few people Carrie seemed to trust. Kipling’s commemorative poem, “A Song in the Desert”, recalls him as an inveterate traveller … an alter ego (second self) who had never forsaken ‘The Gipsy Trail’ … even as the funeral was taking place he and Carrie were on their way to Brazil in search of warm weather.

Since Bland-Sutton had impressed on Rudyard that, for his health’s sake he needed to get out of Europe that winter, the Kiplings had booked a passage for Brazil on the s.s. Andes leaving Southampton on 27 January 1927. They refused to be delayed when only four days before their departure, Landon died in the nursing home which Rudyard had only recently prevailed on him to enter.
With its echoes of Browning’s “A Death in the Desert”, Rudyard’s poem “A Song in the Desert” was a lament for a friend he had loved. He recalled Landon’s candid criticism of his writing (Verse 2). He also commemorated his friend’s gifts for travel and for story-telling and his generosity in bringing back treasures from distant places. (Verse 8) … Within weeks he had inherited his friend’s letters and papers but, sadly, they did not survive the later brutal weeding out of Rudyard’s intimate correspondence by his widow Carrie and his daughter Elsie.

See our notes on Brazilian Sketches.

targe Originally from the Old Franconian (a south German dialect) ‘targa’, a shield”. The Germanic word ‘targo’, implying a border, was a general word for ‘shield’ in Old English. ‘Target’, the diminutive, acquired its present meaning of ‘an object to be aimed at’ in the 18th century; this seems to be Kipling’s meaning here.

crown among palms It is the tallest palm-tree that will be struck by lightning.

[Verse 2] This verse indicates how they shared their work in progress. Landon showed Kipling first readings of his writings, and the poet read his verse aloud.

Rida’ar Charles Allen writes: it could be that this problematic word ‘Rida’ar’ has links with the Arabic rida or redah, meaning ‘a state of contentment’ or ‘favoured’. For example, the city of Riyadh takes its name from rida as ‘a place of contentment’. The context certainly suggests a place name but not one that I know of as far as Tibet, India or Nepal are concerned. However, Landon worked in Basra, in the South of present-day Iraq, just before the Great War, and he might well have picked it up there and used it as a metaphor for an idealised place such as Shangri-La. So perhaps here it is used by RK to suggest a time when Kipling and Landon worked together in harmony, as in South Africa during the Boer War. [C.A.]

Reuters’ The great international news agency established in 1849, and still going strong in these days of broadcasting and the internet.

defiles in this context, narrow passages between cliffs or in fortifications

[Verse 5] This indicates that Landon was an imperturbable stoic who accepted hardships without comment or complaint.

watch-fire a fire lit at night as a signal or for sentries, etc.

Allah divides the companions ‘Allah’ is the arabic word for ‘God’, and this has an echo of the Arabian Nights, but we have not traced the phrase. Information will be appreciated.

”Cease not from singing” Perhaps an echo of Revelations 4,8: ‘They rest not day and night, saying “Holy Holy Holy, Lord God Almighty.”