Five articles were published in the Daily Telegraph and the New York Tribune, as follows:

There was an additional article, meant to be the first, which was never published (two differing drafts have survived). A sour account of Roman society in wartime, which perhaps reflected Kipling’s real views on the complex and ambivalent politicking in Rome, it was justifiably censored by the War Office and the Foreign Office on the grounds that it would only have damaged Anglo-Italian relations. See ORG Volune 5, pp. 2315-2319)

In Italy, a translation of the five articles was published by the Risorgimento Press in paperback form in 1917, reissued in 1988 by the Italian journal Rivista Militare Europea. This re-issue proved to be something of a best seller (anecdotal evidence claims that an Alpini general described it as ‘one of the best accounts of alpine warfare ever written’). However, it must be borne in mind that these articles were not creative works of imagination, but propaganda material, written to serve a political purpose and subject to the whims of the censors at the time.

The War on the Italian Front 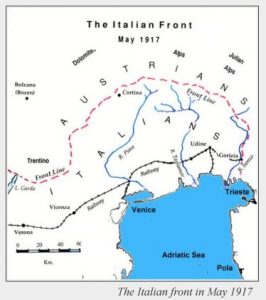 In treaty alliance (The Triple Alliance) with both Germany and Austria – Hungary, Italy remained neutral at the start of the War in August 1914. After months of intense negotiations with both sides, a secret treaty (The Treaty of London) was concluded with the Allies. The terms were that after the expected Allied victory, Italy would be awarded the Austrian territories of Istria, the Tyrol south of the Brenner and the Dalmatian littoral; all long coveted by an expansionist Italy.

In return, Italy was to repudiate the triple Alliance and join the Allies. This was done and in May 1915, Italy declared war on Austria-Hungary, remaining at peace with Germany until August 1916.

Kipling had been invited to Italy by the British Ambassador, Sir Rennell Rodd, who was concerned about the lack of understanding in England of the scale and cost of the Italian war effort. Rodd’s proposal was that distinguished writers from England and Italy should visit each others’ front lines and then write about their experiences in the national and allied press. Some writers, Belloc, Conan Doyle, Chesterton and H.G.Wells, for example, responded quickly and visited Italy in 1916.

For almost a year, Kipling declined to accept the invitation, but at last he changed his mind (we do not know why) and on 1 May 1917 he headed for the Italian Front. He was accompanied by his friend from South African days, (and also the tenant of a cottage on the Bateman’s estate), the journalist Perceval Landon. Landon’s letters from Italy have not survived.

Kipling wrote to his wife almost every day, and having access to the diplomatic bag these letters escaped the military censors. The letters have survived and have been published in The Letters of Rudyard Kipling, Ed. Thomas Pinney, Vol. 4 pages 445-464. From these letters, we get uncensored comment and details of times, dates and places which bring the articles to life.

The first leg of his journey was from Bateman’s to Paris, and as none of the overlapping and competing British bureaucracies had made any arrangements for the journey from Paris to Rome (despite the many trains leaving northern France every day with men and supplies for Taranto and the Mediterranean Fronts), they were delayed until Landon produced a letter from the French Ambassador in London which enabled them to obtain tickets to the Italian frontier. Once in Italy, everything went smoothly and they travelled in some comfort to Rome.

There they met ambassadors, politicians and generals as well as attending a Beatification at the Vatican and being entertained to lunch by Cardinal Gasquet (the ‘English Cardinal’) in his Palace. This special treatment accorded to Kipling was unusual, even unique, and we should perhaps examine the visit in the light of the intense and widespread political and diplomatic activity in the capitals of the belligerents in early 1917.

There had been the February Revolution in Russia, the disastrous Nivelle offensive and the subsequent mutinies in the French Army, the entry of the United States into the war and then the Emperor Karl’s peace initiative and the Sixtus letter. Perhaps Kipling was thought to have more political influence than he really had and he may have been perceived as yet another of Lloyd George’s unofficial envoys (almost invariably used in preference to normal diplomatic channels).
At last, on 8 May (and with some relief) Kipling and Landon left Rome.

Arriving at Udine in the morning of 9 May, they were taken to see General Cadorna and the King at the General Headquarters. The visits to the Front began the following morning, when Colonel Pirelli, their escorting officer, took them to the Carso sector near Gradisca (and, incidentally, near the first British howitzer batteries, which had arrived at Palmanova a few days earlier). They then visited Gorizia and the Italian positions on Podgora, afterwards lunching with General Capello, and then calling at a Red Cross Radiographic Unit at Cormons before returning to Udine. This tour provided the material for the first two articles – The Roads of an Army and Podgora.

The next day (11 May 1917) was devoted to a tour of the Front in the Isonzo gorge, where the Xth Battle of the Isonzo was due to start the following day. They travelled north from Monte Sabotino, along the Kolovrat to a point overlooking Tolmino before heading back to Udine; a journey described in the first part of A Pass, a King, and a Mountain. The last part of this article covered the following day’s experiences as they drove from Udine to Cortina.

On 13 May 1917, they were taken to the part of the Dolomite Front at the Passo di Falzarego, about 14km west of Cortina. This resulted in one of Kipling’s best articles Only a Few Steps Higher Up. The final article, The Trentino Front is based on material gathered on the way from Cortina to the main railway (probably at Vicenza or Verona). In it, Kipling describes vividly a drive across the Altipiano dei Sette Communi (where British troops were to be in action later in the year) to a fortress (probably the Granatiera del Cengio) which looked across to Monte Cimone and also gave a panoramic view of the Venetian Plain to the south. This was Kipling’s last view of the Italian Front before he headed to the railhead at Vicenza or Verona and the journey back to Paris and London. This final article concludes with some philosophical paragraphs about the hopes for the Italy of the future.

Good maps of Northern Italy and the Isonzo (Soca) area of Slovenia are essential for an understanding of these articles; the Touring Club Italiano1:200,000 maps, for Trentino Alto Adige and Veneto Friuli-Venezia Giulia are suitable and for the area around Cortina d’Ampezzo the Kompass Carta Touristica 1:50,000 map 972 ‘Die Dolomitenfront 1915/17’ is recommended.

There are many books in German and Italian on the War on the Italian Front at the time of Kipling’s visit; perhaps the best of all is the official Austrian history, Oesterreich-Ungarns Letzer Krieg 1914-1919 Vol 6 ‘Das Kriegsjahre 1917’.

There are few, if any, in English although the battles on the Isonzo are well covered by the recently published Isonzo – The Forgotten Sacrifice of the Great War by John H Schindler. G.M.Trevelyan’s Scenes from Italy’s War gives a good first hand account of the war on the Isonzo as he experienced it as Commandant of the British Red Cross Hospital.

There are now many interesting websites devoted to the Italian Front in World War 1; a good starting point is firstworldwar.com There are many others in German, Italian and Slovene, often illustrated with photographs which show the formidable nature of the Italian Front terrain.