First published in Maclean’s Magazine in Canada on 15 September 1927 with two illustrations by H. W. Taylor and reprinted in McCall’s Magazine in the United States for October the same year with an illustration by Walter Little. The first publication in the United Kingdom was in the Strand Magazine for February 1928 with four illustrations by Charles Edmund Brock (1870-1938). It is collected in Limits and Renewals (1932) preceded by “The Mother’s Son” and in the Sussex Edition, Volume 11, the Burwash Edition, Volume`10, and Scribner’s Edition Volume 33. In the Strand the title was in quotation-marks but not hyphenated. In most collected versions, however, there is just a hyphen.

The Narrator and four other men, all Freemasons and members of a dining-club, meet one evening at Lemming’s house in Berkshire. The after-dinner conversation turns to detective-stories, and Keede, a doctor, tells how the body of a girl was found on a road just outside Lemming’s village. Her lover is suspected but cleared. Soon after, as he stands on the bank where the body was found, the local policeman is nearly killed himself by a skidding lorry carrying steel girders. The same lorry delivered girders on the night of the murder, and trials on the corner prove that the murder was, in fact, an accident. The case is thus solved half-way through Kipling’s story.

But after seeing a motorcyclist at the scene of the girl’s death, Keede has investigated independently, accompanied by Lemming. A trowel found by the body could have been a murder weapon, and they trace the motorcycle to Wollin, who lives in Surrey, thirty or forty miles away. They visit him and find that he is a keen gardener and a survivor of the Great War, badly wounded and gassed, and much disturbed in his mind. Soon after, Wollin disappears.

After the girl’s death is revealed to have been accidental, they visit Wollin again. Much relieved, he explains that by chance he had been at the scene soon after the girl’s death, had panicked, and had left his trowel behind. Then, terrified by the prospect of arrest and trial, he hid in his basement with a revolver. He is in doubt about his own sanity, and this reveals another mystery—the real heart of Kipling’s story.

After months in hospital for his war wounds, Wollin has been troubled by nightmares. Voices tell him to plant roots from his garden out around the countryside. He has done so, but fears he is out of his mind (‘fairy-kist’). Recognizing phrases Wollin uses to describe his condition, Lemming connects the nightmares to a story read to Wollin in hospital. In Mary’s Meadow by Mrs Ewing (Juliana Horatia Ewing, 1841-85, an author much read and admired by Kipling), a young girl plants flowers for the benefit of “such as have no gardens.” Like Conroy and Miss Henschil in “In the Same Boat” (A Diversity of Creatures), when Wollin understands the source of his nightmares and voices, he recovers his peace of mind.

The characters Lemming, McKnight, Burges, and Keede, all appear in “In the Interests of the Brethren”, the latter also in “A Madonna of the Trenches” (both in Debits and Credits) and “The Tender Achilles” later in this volume. Burges has a cameo in “The Janeites”, also in Debits and Credits. . All these stories are concerned with the fearful memories of war, and their effects on men’s minds.

Kingsley Amis (page 104) calls this a ‘neat detective story’ but does not comment on the larger matters discussed.

However Angus Wilson (page 297) talks of:

Kipling’s continued concern for the rest of his life with the mental and nervous effects left by their war experiences upon ex-soldiers and ex-officers … Eight of the stories are directly concerned with this subject … His most terrible general evocation of madness, “The Mother’s Son”, is used as a preface to one of the least successful of these stories, “Fairy-kist”.

Rudyard makes much of the fact that in his war-blasted state, Wollin was potentially susceptible to any bizarre idea – ‘Jack-the Ripperism’ or religious mania – that he might encounter.

The complexity of approach here, and in other tales of the period, has given rise to the supposition that Kipling’s control of his form slackened towards the end of his writing life. This is not so; the tales never wander, but the density of the interwoven patterns sometimes baffles the eye. We have to peer as if through lattice work to see Wollin as he sits in his cellar. 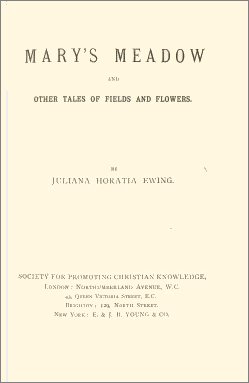 In the “Introduction” to the Oxford Authors, Rudyard Kipling, Daniel Karlin points out that “Fairy-kist” depends for its plot and interpretation on a story by the Victorian children’s author Juliana Horatia Ewing.

This story, called “Mary’s Meadow”, itself tells us about life shaped by literature, for the children in the story make up a game with characters from an old herbal. Karlin connects this sign of Kipling’s life-long bookishness with his earliest reading at “the House of Desolation.” In Something of Myself (p. 7 line 12), Kipling writes:

I have still a bound copy of Aunt Judy’s Magazine of the early ’seventies, in which appeared Mrs. Ewing’s Six to Sixteen. I owe more in circuitous ways to that tale than I can tell. I knew it, as I know it still, almost by heart. Here was a history of real people and real things…

Karlin suggests that Mrs. Ewing “is Kipling’s true foster-mother, and literature his only home” (xxvi-xxvii). In “The Janeites,” Brother Anthony at Faith and Works No. 5837 E.C. asks, “But people don’t get so crazy fond o’ books as all that, do they?”

Roger Lancelyn Green in ORG (volume 7 p. 3214) notes that this tale has been described as Kipling’s only detective-story, but observes that “Friendly Brook” (A Diversity of Creatures) has as good a claim. This Editor is also inclined to suggest “The Return of Imray” (Life’s Handicap); even though that case did not take much solving, it was at least investigated by a policeman, Strickland, who does not appear to great advantage in his other case “The Son of His Father “ (Land and Sea Tales).