It was first called “Kamal”, and attributed to “Yussuf”, one of the pen-names used by Kipling in his young days on the Civil and Military Gazette and Pioneer.

Other ballads tragic and light-hearted are in the “Other Verses” section of Barrack-Room Ballads; see also “The Dove of Dacca”.

This is neatly encapsulated by Jan Montefiore (p. 75):

… Kipling’s justly famous ‘Ballad of East and West’, in which an English officer and an Afghan horse-thief Kamal discover friendship by respecting one another’s courage and chivalry. The ballad tells how, when Kamal the border thief steals a prize bay mare, the Colonel’s son (not named) follows them into enemy territory.

When his own horse collapses from exhaustion the Colonel’s son, having lost a pistol to Kamal and being threatened with the prospect of making a meal for the jackals and crows, ‘lightly’ responds by promising vengeance:

…Do good to bird and beast’
But count who come for the broken meats before thou makest a feast’ .

His jesting defiance wins the tribute: ‘May I eat dirt if thou hast hurt of me in deed or breath’ from Kamal, and the Colonel’s son responds in kind:

Take up the mare and keep her – by God she has carried a man.

Kamal instead gives back the mare with the ‘lifter’s dower’ of his own jewelled accoutrements, and when the Colonel’s son in return offers him the gift of his remaining pistol Kamal, not to be outdone in generosity, whistles up his ’only son’ to be the companion and fellow-soldier of the Englishman. The two young men return to ‘Fort Bukloh’ and: ‘the boy who last night was ‘a Border-thief’ is now ‘a man of the Guides.’

At the end of the year a young man arrived in London with a sheaf
of ballads to sell, and with two or three introductions to editors. The December number of Macmillan’s Magazine contained one of his ballads which set the town on fire, with words which are not likely to be forgotten:

Oh, East is East and West is West, and never the twain shall meet,
Till Earth and Sky stand presently at God’s great Judgement Seat..

Eighteen-ninety was Rudyard Kipling’s year. There had been nothing like his sudden rise to fame and fortune since Byron awoke one morning to find that the publication of “Childe Harold” had made him famous.

Carrington also notes (p. 104) that: ‘this ballad is a romantic version of a tale that was in print long before Kipling’s day.’ Of the opening he writes (p, 136:)

No lines of Kipling’s have been more freely quoted, and more often misquoted in exactly the opposite sense which Kipling gave them. The first couplet is an echo from the Psalms where the figure of speech is used to express the universality of the divine law in spite of estranging seas; the second couplet is Kipling’s commentary, with the same theme as the psalmist.

… a collection of such richness, variety and gusto, if we claim no other merit for it, as to inflate the Kipling boom seven times larger … it was reprinted three times in 1892, and fifty times in the next thirty years, much the most popular book of verse for more than a generation.

Martin Fido notes (p. 62) that: This is Kipling’s first major triumph in London, despite its publication under a nom-de-plume.
Kingsley Amis (page 54) also discusses the misquotations, broadly agreeing with the above, and finally observing:

All that is clear is that Kipling understood and honoured men of other races more deeply than any other English writer, as a reading of Kim will suggest.

And Alfred Lord Tennyson, the aged Poet Laureate, quoted by Carrington (p.136), observed that: ‘young Kipling was the only one of them with the divine fire’. See also “The Last of the Light Brigade”.
J M S Tompkins (pp.77-78), with her usual perspicacity notes Kipling grumbling that the opening line:

… Is always quoted without the far-reaching exception that follows, but this may be his fault for putting the negative so emphatically. These are trifles as against the failure to recognise masterpieces but the habit is a bad one and has had more serious results. Therefore it seems to me that I ought to establish that most of Kipling’s work at all stages requires attentive reading. We ought to see clearly even what we reject.

[line 5] Kamal is out He is raiding the border between Afghanistan and British India with an armed party and perhaps inviting others to join him as in “The Head of the District”, Life’s Handicap p. 127.

[line 8] calkins Horseshoes. Reversing the horse-shoes to confuse pursuers was traditionally an old ruse of cattle-thieves on the English-Scottish border. 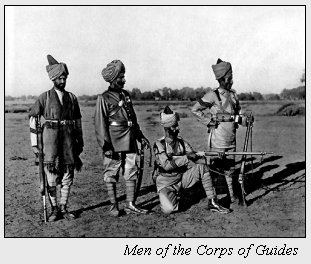 [line 9] the Guides A celebrated regiment of the Indian Army under the British, with a reputation for initiative, endurance, and daring. They are now part of the elite Frontier Force Regiment of the Pakistan Army.

[line 14] Fort Bukloh Identified by Charles Carrington in a letter to the Kipling Journal, (KJ 126/25):

Just back from Pakistan. The scene of “The Ballad of East and West” is quite clearly the plain between Jumrood (‘Fort Bukloh’) and the mouth of the Khyber Pass (‘tongue of Jagai’). Every verbal image in the ballad corresponds with what you can see, hear and smell on the spot. The first village up the pass is actually called ‘Shagai’. 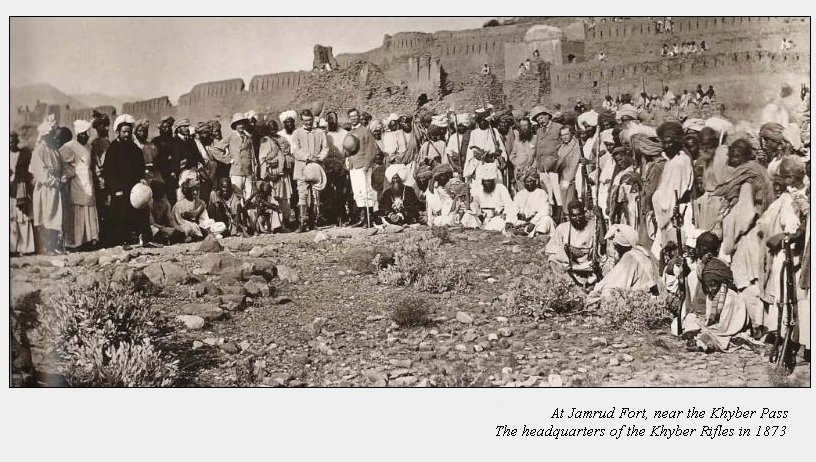 South of Mardan, Shagai is a region in Pakistan’s Federally Administered Tribal Areas. A fort built by the British to oversee the Khyber Pass and house the Khyber Rifles still stands, and is today used by the Pakistan Army.

[line 20] breech-bolt part of the mechanism of a rifle that makes a characteristic noise when operated.

[line 22] the mouth of a bell hard-mouthed and so difficult to control.

gallows-tree the framework on which criminals are hanged, and so an ugly-looking creature.

[line 28] the white of her eye an echo of the order attributed to William Prescott at the battle of Bunker Hill in 1775: ‘don’t one of you fire until you see the whites of their eyes’..

[line 29] ball the missile fired by a firearm.

[line 31] dust-devils small whirlwinds of dust or debris, most frequent in arid regions.

[line 32] a stag of ten A fine male deer, with impressive antlers. More specifically, a stag with ten tines or points on his antlers, five on each side.

barren doe a female deer that has not bred.

[line 34] snaffle-bars parts of the bit used in the mouth to control the horse.

[line 40] red a chestnut or bright bay horse or mare.

[line 46] jackals Small wild dogs. Usually hunting in packs, they are scavengers of carrion but will also eat small animals. Tabaqui, the jackal, figures in The Jungle Book, and is a despicable creature.

[line 48] kite a bird of prey of the family Accipitridae which includes hawks and eagles, A kite named Chil—sometimes called Rann—figures in The Jungle Book.

[line 50] broken meats fragments of food remaining after a meal.

[line 67] a lifter’s dower a ‘lifter’ in this context is a cattle-stealer, a ‘dower’ (or dowry) is the money that is given with a bride to her husband.

turquoise an opaque blue-green stone, much prized as jewellery.

[line 81] trooper a cavalryman, the equivalent of a private soldier in the infantry.

[line 82] Peshawur Capital of the North-West Frontier Province of Pakistan, 11 miles (18 km ) east of the Khyber Pass, which provides the easiest route between the Indian subcontinent and Afghanistan.

[line 84] Oath of the Brother-in-Blood men who have sworn to treat each other as brothers partake in a ceremony in which their blood is mingled.

[line 85] fire and new-cut sod Part of the ceremony. Further information will be appreciated.

[line 86] Khyber knife a long Indian knife with a triangular, single-edged blade and the handle set off centre . See “With the Main Guard” in Soldiers Three p. 61 onwards.

[line 86] the Wondrous Names of God

‘He is Allah, The Creator, The Originator, The Fashioner, To Him belong the most Beautiful Names. Whatever is in the Heavens and on Earth, Do Declare His Praises and Glory, And He is the Exalted in Might, The Wise.’ [Qur’an 59:24]

[line 89] the Quarter-Guard the main point of security in an Indian Army camp or garrison, providing an armed party—day and night—ready for instant action in emergency. The regimental colours, the armoury and the treasury would be kept in this building. together with a lock-up to hold soldiers charged with minor crimes like absence without leave, drunkenness etc.

The Guard usually consisted of the guard commander (a Naik or Havildar) a second-in-command, six guards and perhaps a bugler. The guard turned out for inspection by visiting dignitaries, as Kipling recalled in Something of Myself (pp. 55/56)

I am, by the way, one of the few civilians who
have turned out a Quarter-Guard of Her Majesty’s troops. It was on a chill winter morn, about 2 A.M. at the Fort, and though I suppose I had been given the countersign on my departure from the Mess, I forgot it ere I reached the Main Guard, and when challenged announced mysel. spaciously as `Visiting Rounds.’ When the men had clattered out I asked the Sergeant if he had
ever seen a finer collection of scoundrels. That cost me beer by the gallon, but it was worth it.

[line 90] feud a quarrel in which the members of hostile families or tribes murder each other, often carried on for generations.

Oh, East is East, and West is West, and never the twain shall meet,
Till Earth and Sky stand presently at God’s great Judgment Seat;

David Gilmour writes (p. 89): ‘The charge of racism is commonly accompanied by the quotation of these lines … which imply that the peoples on opposite sides of the globe are so different that they will never understand each other until the Day of Judgement…

Yet the apparent message of these lines is contradicted by the rest of the verse which asserts that two men of equal courage and ability can be equals despite multitudinous differences of class, race, nation and continent. [D.G.]

But there is neither East nor West, Border, nor Breed, nor Birth,
When two strong men stand face to face though they come from the ends of the earth!