Three of the four verses (omitting verse 3) appeared in the Civil
and Military Gazette in August 16th, 1887 under the title “Misunderstood”. The same three verses were the heading to Chapter VII of The Light that Failed with
the “Blue Roses” title, in 1890. ORG (p. 5185 vol. V.I.) lists the poem as No. 275.

In 1902 the same three verses were printed in Hutchinson’s Book of
Beauty, London, second edition, replacing Kipling’s verses known
as “The Quest” (ORG No. 694) which appeared in the first edition:
so this poem has sometimes been mistakenly listed as “The Quest”. It has
also been indexed as “Roses Red and Roses White”.

The complete poem is collected in:

This poem, written when Kipling was only twenty-one, and working as a journalist in India, tells of a misunderstood young man—one must surely assume his youth. His lady-love insists that he must bring her blue roses. He quarters the world on this impossible quest, and returns empty-handed to find that she has died. It had been a ‘silly love’.
Ann Weygandt (p. 122) sees this as one of a number of poems written under the influence of the Pre-Raphaelites with whom he had family connections through the Burne-Joneses, with their interest in romantic courtly love in the tradition of Arthurian legend. She sees the poem as having a ‘slightly antiquated air’.

During his time in India, Kipling wrote a number of stories about relations between men and women, some frivolous, some much less so.

Such tales and verses reflect the experiences and concerns of Kipling’s Anglo-Indian readers, for whom many of his themes would have had a familiar ring. But the critics are generally agreed that “Blue Roses” reflects not only the life he saw around him, but his own bitter experiences.

In 1880, at the age of fourteen, Kipling had encountered ‘Flo’ Garrard, a beautiful girl of fifteen, and fallen passionately in love with her. (Andrew Lycett p. 73). ‘Trix’ Fleming, Kipling’s sister, knew her, and wrote many years later of her …

… beautiful ivory face, the straight slenderness of her figure, and the wonder of her long hair when she brushed it at night,,,
[Trix Fleming to Elsie Bambridge, 15 January 1940, quoted by Lycett p. 73.]

Though she seems to have remained indifferent to him, he wrote a number of poems for and about Flo over the next two years [Lycett pp. 74-5], and when he left for India in October 1882 he considered himself engaged to her. He must have continued to write to her from Lahore, until, some time before July 1884, she evidently wrote to break off any understanding they might have had. [Angus Wilson p. 153] It seemed that he could not give her what she wanted. Thus when “Blue Roses” was written he must have had his own personal experience in mind, a rare departure for the young poet, who usually chronicled the lives and loves of his fellow Anglo-Indians as a witty and ironic observer.

In February 1890, after his return to England, he encountered Flo Garrard by chance in London, and visited her in Paris in May, but her feelings had not changed, leaving him in a state of considerable emotional turmoil. Soon after he began to write his novel The Light that Failed, in which he gives a highly charged account of the relations between the hero Dick Heldar and Maisie, his childhood sweetheart, which seems to have been written in a mood of furious resentment against Flo. The three verses from “Blue Roses” serve as the heading to chapter 7. (See our notes on the work by Geoffrey Annis.)

What The Light that Failed betrayed was Kipling’s attitude towards his final failure to forge a relationship with Flo. The novel worked hard to solicit the reader’s sympathies for its protagonist Dick, leaving the selfish, unreasonable and capricious Maisie to regret, too late, the emotional frigidity that spoilt their chance of happiness.

`Blue Roses’, the verse epigraph to chapter 7, encapsulated Kipling’s
self-approving version of the relationship between Dick and Maisie in
suitable Nineties’ quatrains.

Thirty-six years later, on the fly-leaf of a 1927 printing of The Light that Failedd, Flo Garrard replied to the novel, and specifically to these verses. Her acerbic, private rejoinder is her only known comment on her relationship with Kipling: 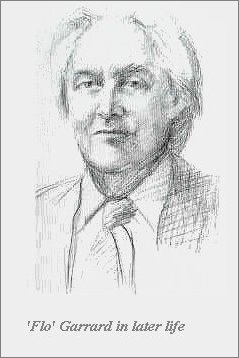 If you happen to read this singular, if somewhat murky little story you are very likely to rather wonder if real people could be quite so stupid and objectionable as this crowd.

Of course its difficult to see oneself as others see you, still
m’thinks there’s something somewhat distorted about it all; and that the story does not run thoughout its whole length on lines quite parallel with Truth. It looks to me rather like its image reflected in a Distorting Mirror appearing all distorted, and grotesque.

For instance in the case of the `Blue Roses’ (I didn’t refuse any other colour) but as a matter of fact, Dick, with his obliquity of vision failed to observe, that I wasn’t exacting them of him, but he of me. A trifle obvious enough, but somehow overlooked.

In fact the only time I ever seemed to see eye to eye with him was
when he said:

It may be beyond the grave
She shall find what she would have.
Oh! t’was but an idle quest—
Roses white and red are best!

(Ricketts notes that it is interesting that she refers to ‘Dick’ rather than to ‘the author’. See also Angus Wilson (pp. 153-7) for a critical account of Kipling’s relationship with Flo Garrard and its expression in The Light that Failed.

“Blue Roses” There were no blue roses. It was an impossibke quest, as—evidently—was Rudyard’s pursuit of Flo Garrard.