The story was published in the Civil and Military Gazette on November 13th 1886, in the first Indian edition of Plain Tales from the Hills in 1888, and in subsequent editions of that collection. See David Alan Richards p. 17, passim.

Plain Tales from the Hills is available from Amazon with these notes as an e-book, price £1.56, and in many paperback editions.

Young Miss Gaurey has been made by her mother to marry Schreiderling, a wealthy older man. She had loved a young man, who ‘bore his love quietly’ and was transferred away. She pines for him and grows ugly, but has scant sympathy from her husband, who ‘set great store upon speaking his mind’. One day the Other Man tells her he is coming up to Simla, and she waits in the rain to see him, in great excitement. But, already unwell, the journey is too much for him, and all that arrives is his corpse. Mrs Schreiderling continues to live in misery, with scant sympathy from her husband. 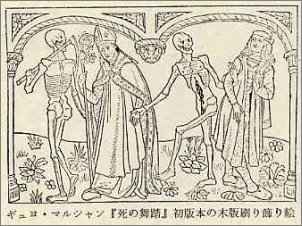 Kipling’s vitality and curiosity, his strong physical sensitiveness, his life-long taste for marked contrast and ironical pattern, produced a multitude of scenes and figures which provide a parallel to the medieval Dance of Death. (‘Death’ as a dancing skeleton, leading men to the grave: Ed.)

Here is the Other Man, come back to Simla to visit the woman he loved…

In her chapter 8, ‘Change and Persistence’ (p. 233), writing of a number of the early tales, she observes:

Poor bullied Mrs Schreiderling in ‘The Other Man’ is seen ‘kneeling in the wet road by he back seat of the newly-arrived tonga, screaming hideously’. There is a strong note of violence and abandonment in these drastic scenes and anecdotes, however curtly they are told. The Narrator, for all his knowledgeableness, is sometimes appalled.. It is in this region of grotesque and tragic illusion and grotesque and tragic reality that we find what is permanent in Kipling, not in his precocious and cleverish dealings with Simla flirtations. …

For both authors … love is a kind of disease, a source of evil, of bitter unhappiness, an object of cynical or ironical comment. Bobby Wick’s advisers warn him against it; it puts an end, at best, to a promising career – to Gadsby’s for example in the army and Strickland in the police.

[Wick appears in “Only a Subaltern” Strickland in “Miss Youghal’s Syce” and a number of other tales, and Gadsby in “The Story of the Gadsbys”. See also the accompanying verse “The Winners”: “He travels the fastest who travels alone”. Ed.]