Eight of these nine letters were first published in 1892 in The Times (London), the Civil and Military Gazette (Lahore), and the New York Sunday Sun. In the latter the series title was not used, each letter appearing under its own title only.

The ninth, and last, letter, “Leaves from a Winter Notebook”, which was not one of the original group, was first published in Harper’s Magazine for May 1900. It was, though, included in Letters of Travel (1892-1913), published by Macmillan in London and Doubleday Page in New York in 1920.

They were subsequently collected in:

For further details of publication see David Richards, pp. 258 and 260.

Kipling married Caroline Balestier on January 18th 1892, and soon after they set off on their honeymoon, sailing to New York, and then heading north to Caroline’s home place in Vermont. They then travelled across the US and Canada by train, and took ship across the Pacific to Yokohama by April 20th. Kipling was happy to rediscover his delight in Japan.

After a pleasant month enjoying the Japanese Spring, they discovered that a good proportion of their savings had been lost in a bank crash, and this led them to cut short their plans for further journeys, including a visit to Robert Louis Stevenson in Samoa. 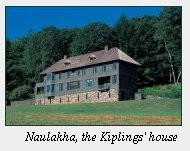 Towards the end of June they sailed back across the Pacific to Vancouver and thence across America again. to Vermont, where they had decided to settle.

The last letter, “Leaves from a Winter Notebook” was written in 1895 after they had made their home there.

From Tideway to Tideway