ORG Volume 5, page 2527 records the first publication of this article (Uncollected No. 224) as a letter to the Editor of The Spectator of 2 July 1898. It was included in A Book of Homage to Shakespeare, edited by Israel Gollancz (OUP, 1916) under the title “The Vision of the Enchanted Island”, and in KJ 127/05. 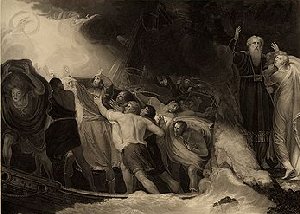 “The Tempest” is set on a mysterious island, on which a group of lords are cast ashore by a storm. This ‘Tempest’ had been called up by magic by Prospero, the rightful Duke of their city, whom they had banished years before, and various fantastical events ensue.

Where did Shakespeare find the inspiration for this strange scenario ? In his letter Kipling notes that it may have been based on the story of a English Admiral, cast away with his crew on the island of Bermuda, which Kipling had visited in 1894. But he goes on to suggest that much of the detail may have come from the ramblings of a drunken sailor, reminiscing about his adventures, and overheard by Shakespeare, writer and stage manager for a group of players, seeking ideas for a new piece.

Kipling had a good knowledge of, and affection for, the works of Shakespeare, paying him the compliment of imitating him in the enchanting “Proofs of Holy Writ” , in which Shakespeare is drinking with Ben Jonson in an orchard, where he redrafts some verses of Isaiah for the new ‘Authorised’ translation of the Bible for King James I.

Other Kipling parodies include “The Muse Among the Motors” and “Gow’s Watch”, which latter so delighted Angus Wilson (p. 331) that he desired to see the play of which it purported to be an extract. See also KJ 154/08 and 156/05, the poem “The Craftsman,” and “The Marrèd Drives of Windsor”.

See also KJ 034/66 for an old inhabitant of Stratford-upon-Avon who believed Shakespeare has “written for the Bible”;also KJ 062/17 for the ‘cipher’ in the 46th Psalm. As the report in KJ 062 explained:

…the Psalms were translated from the
Hebrew in the year 1610. In that
year Shakespeare was 46 years old,
and it will be found that the 46th
word from the beginning of the 46th
Psalm is “shake” and the 46th word
from the end of the Psalm is ” spear.”

… they would have a “Shakespeare Evening” when all conversation had to be in the form of quotations from Shakespeare – a lot of them made up on the spot with no looking up references until the following day. Part of the fun was to see how much fake Shakespeare they could get away with undetected.

Charles Carrington records Kipling’s visit, with his wife, to Bermuda in 1894 (page 213): 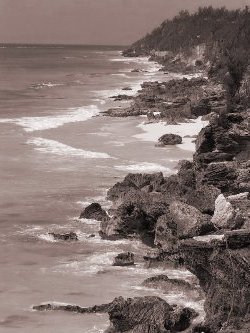 In Prospero’s magic isle Rudyard found a key to Shakespeare’s art which he often pondered over in later years. Seeing with his own eyes that the set of the beach was congruent with the scenery of The Tempest, he conceived the notion of a shipwrecked sailor spinning a yarn from which Shakespeare visualized the island… This was certainly the method by which Rudyard picked up his own notions.

And Carrington (p. 500) also recalls that in 1930, when Carrie, his wife, became ill with appendicitis, Kipling found himself in Bermuda again, where his solitary lodgings gave him leisure to write “A Naval Mutiny” and:

…harking back to observations made. many years previously, into the background of Shakespeare’s Tempest, he made a ballad of them, “The Coiner”:

For a bite and a sup, and a bed of clean straw
We’ll tell you such marvels as man never saw,
On a Magical Island which no one did spy
Save this Master, that Swabber, yon Bo’sun, and I.

Search English literature and you will find no treatment of the English soldier on any adequate scale between Shakespeare and Kipling. He who wishes to know how British soldiers fight, how officers and men regard each other, how they talk the night before the battle, will seek the information in “King Henry V” or in Barrack-Room Ballads, for it is to be found almost nowhere else in our English classics.

They stand with Shakespeare’s Nym and Bardolph with Pistol as the most famous soldiers in literature.

There are numerous references to Shakespeare’s work in Kipling’s writings, from the echoes of “A Midsummer Night’s Dream” in Puck of Pook’s Hill and Rewards and Fairies, to “Love o’ Women” in Many Inventions (p. 291, line 27), the poem “The Craftsman” , and “The Propagation of Knowledge” in Debits and Credits.

Lastly there is Kipling’s plea, in “The Appeal”, to be allowed to rest in peace:

If I have given you delight
By aught that I have done
Let me lie quiet in that night
Which shall be yours anon.

And for the little, little span
The dead are borne in mind;
Seek not to question other than
The books I leave behind.

This echoes the rather more robust inscription on Shakespeare’s tomb: