the ‘Tempest’ a play by Shakespeare, set on a mysterious island, and first performed on 1 November 1611.
[All quotations below below are from “The Tempest” unless otherwise indicated; Ed.]

[Title] Shakspere William Shakespeare (1564-1616) English dramatist and poet. The spelling used by Kipling, SHAKSPERE was popular in the later 19th Century, but eventually the accepted spelling became SHAKESPEARE as in most of his printed work.

Malone Edward Malone, (1741-1812) Irish Shakespearean scholar who produced a ten-volume edition of the works of Shakespeare. in 1790. 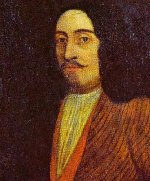 In 1609, appointed Admiral of the Virginia Company’s Third Supply Fleet, he sailed in the flagship for Jamestown, Virginia. The fleet ran into a storm and his ship began to take in water and was in danger of sinking, so he put her ashore on what turned out to be Bermuda. All hands (and a dog) survived. Some believe that this incident was one of the inspirations for Shakespeare’s play “The Tempest”.

Bermuda one of a group of islands in the North Atlantic.

claw the ship off a lee-shore an attempt by a sailing-vessel to work to windward to avoid being blown ashore. A difficult and dangerous procedure in bad weather.

doit a very small copper coin from the Netherlands.

Sebastian says to Antonio Characters in “The Tempest”. Sebastian is brother to the King of Naples. Antonio has usurped the title of his brother Prospero, Duke of Milan. Both have been cast away on the island.

I think he will carry the island home in his pocket. [Act 3, scene 1].

The isle is full of noises
Sounds and sweet airs….
[Act 3, scene 2]

Trinculo a jester to the King of Naples

hangings and a placard The Elizabethan stage was usually bare, occasionally with draperies, and perhaps a notice saying A DESERT PLACE , or wherever the action was supposed to be taking place.

Hamilton capital of the Bermudas

Stephano’s butt of sack a cask of white wine (sack) then imported from Spain and Portugal, belonging to a drunken butler in “The Tempest”

a bombard was an early form of cannon.

broacht a cask that has been broached or tapped.

The Historye of Aurelio and Isabelle, Daughter of the Kinge of Scottes

no play or novel can be indicated as the source of “The Tempest”. In minor details, however hints are clearly traceable.

So there may well be something in what Kipling says in “The Coiner”, or for that matter, in “Proofs of Holy Writ”.

waiting on his demon waiting for inspiration from what Kipling called his ‘Personal Daemon’. See Something of Myself p. 208, and an article in The Spectator of 28 July 2003, quoted in KJ 299:

Chaucer was one of the four inexplicable geniuses of English literature, along with Shakespeare, Dickens and Kipling: that is, he had a daemon which enabled him to create works
of stunning originality that sprang from nothing, with
no precursor.

Prospero the Duke of Milan who was cast adrift with his daughter Miranda, landed on the island, and survived with the aid of magic.

Caliban is a savage and deformed slave who plays an important part in the play.