The edited text largely corresponds with that first published in the Pioneer of 27 January 1890. .

No.XXX described how he started from Mammoth Springs on 5 July heading south through the Park, going via the Norris area and ending the day in the Madison Area after a 40 mile buggy ride. The party spent the night here.

This chapter describes the continuation to the Old Faithful area, where the party spent another night in the Upper Geyser Basin, before continuing their journey via the Lake area, Yellowstone Canyon, Tower Falls, and finally back to Mammoth Springs on 9th July, having completed a circuit of the wonders of Yellowstone.

[Page 96, line 11] Ollendorf this reference is to Dr Heinrich Godefroy Ollendorff whose ‘New Method of Learning to Read, Write and Speak a Language in Six Months’ had been adapted to French, Italian and other languages, and enjoyed a wide vogue from the 1840s. [Kipling’s Japan: Collected Writings, ed. Hugh Cortazzi & George Webb, Athlone Press, 1988, p.114, note 4.] Ollendorf is also mentioned in “Griffiths the Safe Man” and “Letters on Leave II”, both of which were later collected in Abaft the Funnel (1909)..
.

His spear—to equal which the tallest pine
Hewn on Norwegian hills, to be the mast
Of some great ammiral, were but a wand—
He walked with, to support uneasy steps
Over the burning marl, not like those steps
On Heaven’s azure; and the torrid clime
Smote on him sore besides, vaulted with fire.

[Page 97, line 11] Bethesda the pool of Bethesda in Jerusalem.

[Page 99, line 13] Krakatoa a volcanic island in the Sunda Strait between Sumatra and Java. Its eruption in August 1883 was the most violent of modern times, in which about 36,000 people were killed in the explosion and by the hundred foot (30 metres) tsunamis (tidal waves) that it caused.

[Page 102, line 9] Jakko the hill behind Simla (now Shimla) in the hills of north-west India.

[Page 102, line 21] Wrap-up-his-Tail A member of the Native American Crow Tribe. His name should be ‘Wraps-up-his-Tail’.

[Page 102, line 29] Buffalo Bill This is the nickname of William Frederick Cody, 846-1917, (above). He was an American soldier, bison hunter and showman. His career as a showman began in 1872. He epitomised the legend of the heroic conquest of the American West,

[Page 102, line 31] Cook City or Cooke City, just outside the north-east boundary of the Park.

[Page 105, lines 6 & 7] Cable’s works George Washington Cable (1844-1925), author of fiction principally about New Orleans. He was acquainted with Mark Twain and they carried out a lecture tour together. [See this website.]

[Page 105, line 32] head-hunters of Assam Assam is a State in the north-east of India where certain tribes had a predeliction for collecting the heads of strangers, most tribes keeping the heads within their villages. Kipling refers to the Akas tribe in Chapter 7 and to other head-hunters in Chapter 9 of Kim.

[Page 107, line 3] the Bolan line a railway line beginning by the River Indus in western India. [D.H.S.] It ran through the Bolan Pass between Sibbi and Quetta, continuing thereafter to Kandahar. Kipling also refers to it in “The Man who would be King”. It is not known whether or not it still functions in its entirety but the Bolan Pass section does appear on Pakistan’s railway map.

[Page 111, line 5] Rajputana or Rajasthan. Kipling travelled around this State in 1888, described in Letters of Marque.

[Page 111, line 6] Oodey Sagar or Udai Lake is about 8 miles to the east of Oodeypore or Udaipur. Kipling describes his visit to this area in Chapters VI to IX of Letters of Marque, but does not mention this lake..

[Page 111, line 10] Troy town the city besieged and eventually sacked by the Greeks in ancient times, as described by Homer in The Iliad.

[Page 111, line 13] The Academy The Royal Academy of Arts in Piccadilly, London. Its Summer Exhibition displays contemporary works of Art, and its Hanging Committee rejects any work offered that is of too low a standard. 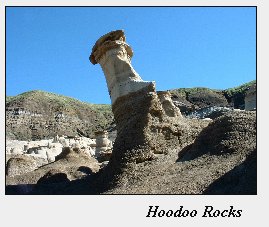 [Page 113, line 8] Hoodoo region Hoodoos are tall columns of oddly-shaped rock produced by differential weathering. They are typically composed of sedimentary rock and the eccentric shapes and variable thicknesses of the spires are caused by the different erosional rates and patterns of alternating hard and softer rock layers. Usually weathering leaves a bit of harder, resistant rock protecting the weaker rock layer beneath it.

A great example of hoodoos is at Bryce Canyon National Park in Utah. Hoodoo Basin along the eastern boundary of Yellowstone also has true hoodoos. Just south of Mammoth Village in Yellowstone, the main park road travels through an area called “the Hoodoos” but these aren’t actual hoodoos geologically, but rather a pile of rocks that broke off and tumbled down from Terrace Mountain to rest in odd formations. [See the Yellowstone web-site.]

[Page 113, line 11] … Death Gulch … is located in the Park and dead animals have been found there on numerous occasions. Investigations suggest that the deaths were caused by concentrations of gases which had seeped from the ground. [See the Volcano Watch web-site.]